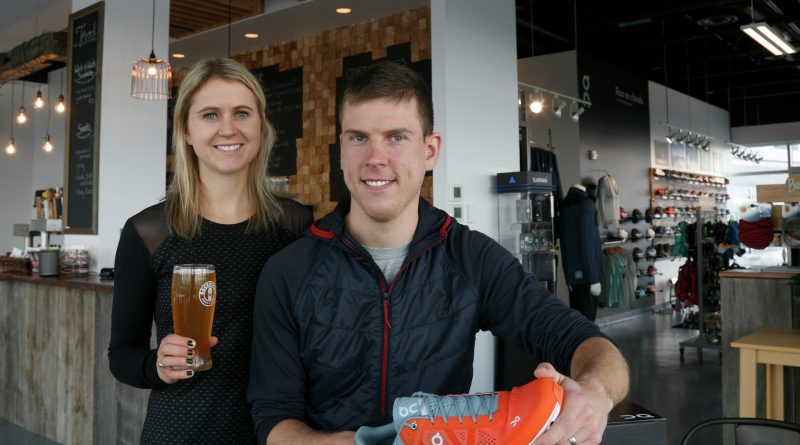 One part shoe store, one part taproom, a unique retail
concept hits the street in West 5

YOU SEE THEM early in the morning on most weekends, gathered in packs of a dozen or more, thwarted only by the occasional streamer off Lake Huron blanketing the city in snow. They are friendly but business-like, there to complete a task and get on with their day.

They are runners, turning the solitary to communal, the boring to social.

Emily and Aaron Hendrikx know them well; these are their people. In December, less than six months after their wedding, the newlyweds opened BackRoads Brews & Shoes, a business that caters specifically to them.

“We wanted to open a running shoe store, but we knew we
needed to do it differently. We joked with one of our shoe reps that we should put in a bar. And then we decided it was a
great idea” —Emily Hendrikx

The first retailer to open in Sifton’s cutting-edge West 5 development, BackRoads combines a specialty running shoe retailer with a funky taproom to create a unique space for active people who like to socialize.

“We wanted to open a running shoe store, but we knew we needed to do it differently,” says Emily, 26. “We joked with one of our shoe reps that we should put in a bar. And then we decided it was a great idea.”

Avid runners who both ran back roads growing up in the country and met in a running club, the couple wanted to ­create the same atmosphere at their shoe store.

“People get together to run, and then after they want ­somewhere to go, to hang out,” says Aaron, 24.

BackRoads essentially is a one-stop shop for runners of that kind. Newbie or veteran, they can join a running team geared to their ability, based at the taproom. They run together on the extensive trails in and around Riverbend and Komoka, then enjoy a craft beer, wine or fancy coffee together afterward. In the warmer months, there will be food trucks to bump up the fun factor.

Around the corner from the taproom is the retail portion, home to high-end shoe brands not easily found elsewhere. Sure, there’s New Balance, Asics and Saucony. But how about Hoka One One, Merrell and Oiselle? They’re all available, expertly fitted by Emily and Aaron, shoe fit specialists. There’s specialty apparel as well.

If that’s not enough, in another ­couple of years, some of the craft beers on tap will be made from hops the ­couple are farming north of the city.

“Last year, we planted one acre of hops,” Aaron says. “We will expand to 10 acres this spring. It takes three years for hops to mature, but when they do we’ll be able to offer local craft ­breweries Ontario hops. Many use European hops now because Ontario hops are hard to find.”

When they’re not running their business, they’re just plain running. “We run every day or multiple times a day,” Emily says. Aaron ran the 10K at the 2015 Pan Am Games in Toronto. He was also part of two championship cross-country teams at the University of Guelph.

In addition to their big plans for BackRoads, the couple has hopes that Aaron can train hard enough in the next two years to qualify to run the 10K in 2020 Olympics.

“I would need to take a minute off my best time,” he says.