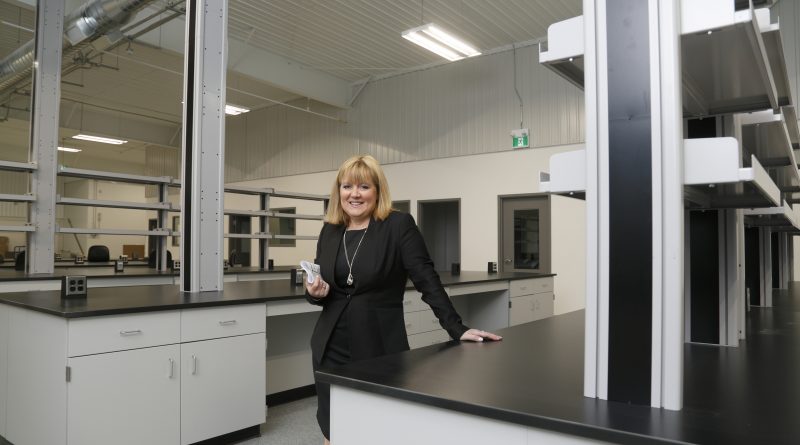 PROPELLED BY GROWING international demand for its cutting-edge technology, Diagnostics Biochem Canada (dbc-labs.com) moved this spring to a 35,000-square-foot Innovation Park facility. The company’s new home is more than four times the size of its previous home, which itself was twice as big as its previous location.

Growth has been the watchword for the last decade, after CEO Manon Hogue moved from Montreal in 2008 to lead the company. She assumed the reins following the death of her uncle, Dr. Guy Reno Dumont, who founded the company in the early 1970s. In 2009, the company had four employees. Today, it has 32 and will add more, no longer restricted by a lack of space.

“We are producing 90,000 test kits a year, which was the maximum we could do in our previous location,” Hogue says. “We just ran out of room. At the new facility, we will be doing a lot more production. There’s demand for our products all over the world.”

At current production levels, the company’s kits are used roughly 10 times per hour, every hour of every day of the year.

DBC produces blood test kits, used in clinics, labs and hospitals to detect a wide variety of ailments. Immunoassay kits detect levels of antibodies created in reaction to a change in body chemistry or condition. One of the simplest forms is a pregnancy test, which measures heightened levels of a telltale chemical in urine. More complex tests can ferret out markers for tumours or cardiac injury, among many other things.

DBC has grown by improving existing tests and by creating tests for conditions which previously could not be detected by drawing blood.

“We are producing 90,000 test kits a year. There’s demand for our
products all over the world” —Manon Hogue

Its most recent breakthrough is a new way of detecting thyroid hormone levels. “We worked for three years to develop a reverse T3 test,” Hogue says. “It is much more accurate than previous tests. It really nails it down.”

Although the company sells some kits in Canada—including to the London Health Sciences Centre—its success is international. It supplies LabCorp in the U.S. and is the leading supplier of test kits in Brazil. It’s also active in much of Europe and parts of Africa, as well as Dubai and Singapore. It won a provincial government exporting award last year.

The company thoroughly renovated its new Neptune Crescent location, modernizing the look and function of the building. “It was difficult to find the space we need,” Hogue says, more difficult perhaps than finding properly trained employees. “This is a great area to find qualified people. We hire a lot of PhDs and lab technicians, and we get lots of CVs.”

Hogue is not selling the former location in Dorchester and may use it to launch a related but different business in the near future.