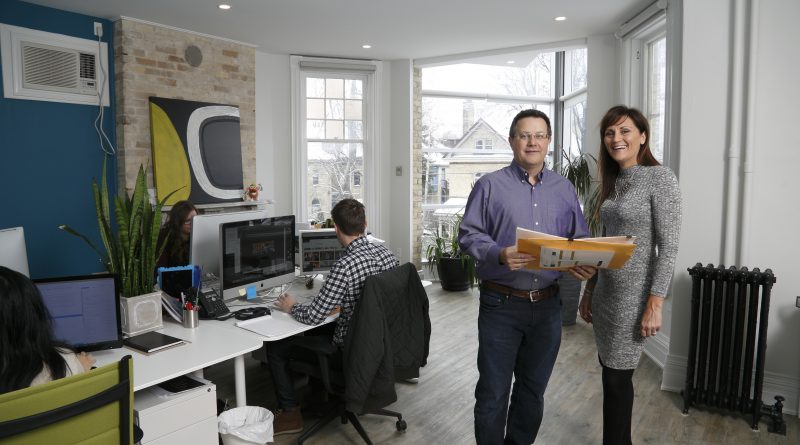 IT TOOK A few years, but adHOME Creative finally has a home of its own.

The marketing and branding business spent much of last fall renovating a Wolfe Street home it purchased in the spring. Although it had been an office for many years, adHOME (adhomecreative.com) co-owners Mary-Ellen Willard and Mark Brown decided to redo virtually everything—except the unique boiler system that is still chugging away decades after installation.

The result is a funky, functional three-storey space that splits the difference between office and home, giving the company’s 25 employees a place to work that better reflects its philosophy and vibe.

“Our old office had no character,” Willard says. “It was a big open space with a board room. When our lease was coming up, we started looking for something we could own.”

They wanted to stay near the core and quickly realized that would be a challenge. “We looked at a lot of spaces, including places closer to the highway, which in a way would have been more convenient,” Brown says. “But we did want to stay near the core, in part because it’s central for many of our people, and also because we wanted a place with character.”

The home, at 318 Wolfe Street, is nearly 100 years old and has taken many forms in its life. The adHOME renovation included a new ceiling beam on the main floor to open up some space, along with a new open-concept kitchen on the third floor, five bathrooms and a shower for cyclers and lunch-time exercisers.

“We looked at a lot of spaces, including places closer to the highway, which in a
way would have been more convenient. But we did want to stay near the core,
in part because it’s central for many of our people, and also because we
wanted a place with character” —Mark Brown

The kitchen doubles as a casual meeting space for the entire group, something they do Monday mornings to kick off the week. The space also lends itself perfectly to office celebrations and informal gatherings.

New floors throughout, new drywalled ceilings and new paint give the place a refreshed look. The collection of eclectic pieces like an antique dining table in the boardroom and unique lighting fixtures throughout deliver some of the desired character.

People work in various nooks on all three floors covering 6,500 square feet, sometimes collaboratively in open spaces and sometimes solo in private spaces. The kitchen chores are divided up like a family would with a schedule and responsibilities for all. The feeling of home will be enhanced in the coming weeks when they turn their attention to the flower beds along Wolfe Street and a deck they hope to build on the side of the building to create even more flexible space to work and relax.

The building is equipped with fibre optic connectivity from Start.ca. It also has several large, flat-screen monitors throughout, all connected wirelessly to laptops, eschewing the need for projectors and other 20th Century technology.

The functional basement houses servers in a fireproof room, courtesy of one of the previous tenants, an architecture firm.