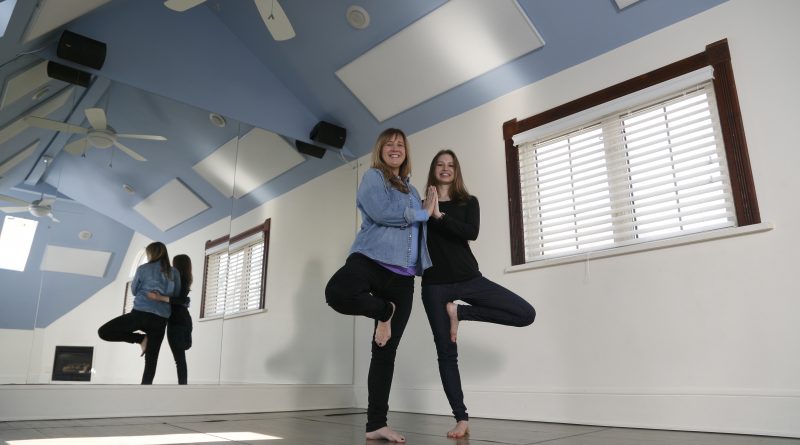 By offering women-only classes in an isolated environment, a yoga studio takes
down barriers that keep some Muslim women from participating

LISA SHACKELTON BELIEVES yoga is for everyone. So it’s important to her that the classes offered at her Yoga Shack (yogashack.ca) locations are welcoming, comfortable and affordable for anyone who wants to learn and practise yoga.

“Over the years, I’ve had random people ask from time to time if we might run ladies-only sessions, but there were never enough at one time to make a class,” says Shackelton.

The idea stayed in back of her mind, though, so late last year when one of her instructors, Layla Amer Ali, approached her to suggest a ladies-only class and offered to lead it, Shackelton felt the time was right to give it a try. Amer Ali is Muslim, and although she doesn’t wear a hijab, she knows a lot of women who do. She knew they would feel more comfortable coming out to a yoga class that was not mixed gender.

“Our staff have different interests and diverse cultural and religious backgrounds, and I want to support them,” says Shackelton. “We want Yoga Shack to be accessible and inclusive for all community members, and this was important to Layla. [So] I said sure, let’s try it, and she really ran with it.”

The class runs every Sunday at Yoga Shack’s Bruce Street location, in a private room on the upper level where there won’t be men walking through. “It’s a place where women who cover their hair with a hijab can remove it while they are in the class, [and] a place where women can meet and learn about each other’s cultures,” says Shackelton. “I think people recognize there are differences, but also similarities—we all have so much in common. Regardless of your culture, everyone wants to be healthy. When you take a yoga class, you feel so much better when you leave.”

“I think people recognize there are differences, but also similarities. Regardless
of your culture, everyone wants to be healthy” —Lisa Shackelton

Amer Ali says it is not just Muslim women who enjoy the female-only environment. “The class is usually pretty full, with 13 to 15 women, a mix of ages and experience,” she says. “We have some pre-natal, some older women and some students who like to do yoga every day and are more advanced, which is great for people who are new to their practice—to see where yoga can take them.”

Shackelton can relate to the appeal for pre-natal participants, having just had her second baby in December. Because it is proving to be so popular, she anticipates adding another women-only session on a different day of the week in the fall.

The women-only session is just one of more than 80 classes that run at Yoga Shack each week (fewer during the summer).

Shackelton also hosts one mega-class each year—the annual Yoga Shack Gives Back event at Budweiser Gardens. Part community class and part fundraising event, proceeds from the day are directed to a different charity each year. This summer’s event will contribute to The Nathan T. Deslippe Memorial Fund, which has a personal connection for Shackelton and her 22 employees. Deslippe, who died tragically last August, was one of Shackelton’s instructors. “He was an amazing young man,” she says, “and this is one way of honouring him.”