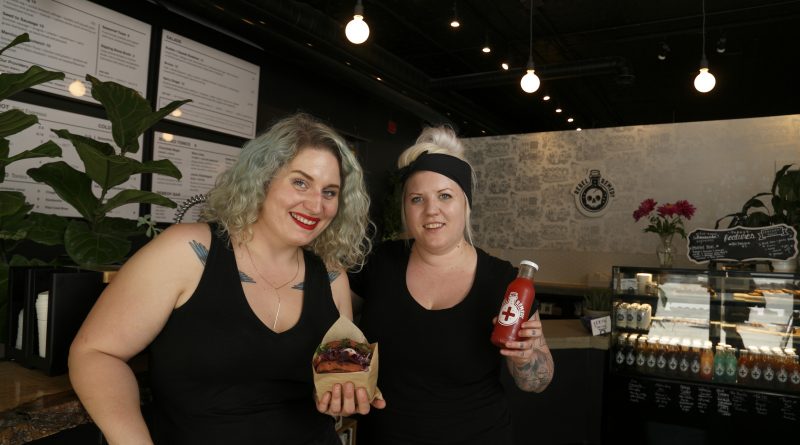 JULIE KORTEKAAS IS a nutritionist by training; Shayna Patterson is a chef. Both are handy with a hammer, both want to produce food and drink that intersect enjoyment and a healthy lifestyle, and both believe that serving just the right blend of functional beverages and fresh, local healthy food is the key to success for their newly opened business, Rebel Remedy Health Bar.

However, both owners insist the new enterprise isn’t a health-food business. Instead, it’s more about delivering healthy options without being pretentious, and helping people to quell the emotions associated with a constant struggle to watch what they’re eating or drinking.

Located on Dundas Street between Wellington and Clarence streets, the store was an open, empty 1,200-square-foot space when the two women decided it would be the ideal location for their health bar. They quickly transformed it, putting retail in the front third of the store and a kitchen, fermenting room and storage in the rear. It was a hands-on renovation.

“We designed it, built walls, poured the concrete counter, installed the shelving and used a lot of salvage where we could. We executed it exactly as we wanted”
— Julie Kortekaas

“It cost about $150,000, and we saved a lot of money by doing work ourselves,” says Kortekaas. With some help from their husbands and parents, “we designed it, built walls, poured the concrete counter, installed the shelving and used a lot of salvage where we could—like the coolers, which are from an old grocery store. It was less costly and also quicker, plus we executed it exactly as we wanted.”

The cost included a hydraulic cold-press juice machine, which enables them to press and bottle fresh juices on-site. The colourful concoctions are displayed in clear glass bottles, and provide pops of colour that stand out against the store’s neutral walls and wallpaper. On the wall is a logo with a round corked bottle with a skull on it. The look is a little edgy, says Kortekaas, to reflect “our heritage as punk kids. We don’t want our logo or space to look corporate.”

There are also a lot of plants incorporated into the space. Even though they are in the core of city, with one of London’s busiest streets right at their doorstep, the women want to be surrounded by natural living things as they work.

The juices, tonics and kombucha, which is fermented on-site, are labeled with a similar logo—the round corked bottle, but with a white cross that brings health tonics or elixirs to mind.  Ingredients for the drinks, as well as the take-away food menu, are sourced as much as possible from local farmers. To boost the healthy factor, customers can add a sprinkle of cricket protein or a dash of meal worm or other nutraceuticals from the ‘remedy bar’.

From day one, the two women and their three part-time staff have seen steady business growth, and they expect that it will only get busier.

“A lot of our clients are local businesspeople, library staff, other young entrepreneurs and retailers on the block. Once we get proper labeling for wholesale, we hope to sell through some local
health food stores, and we’re also looking to be in a few local restaurants before the end of the summer.”