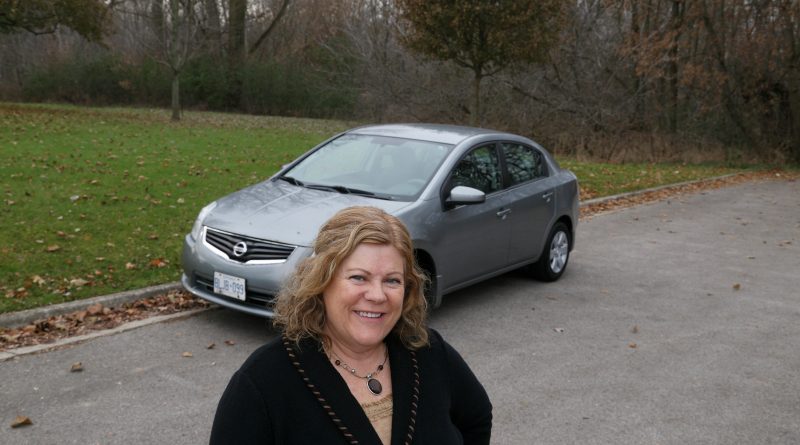 I’VE ONLY HAD the vehicle for a little more than two years. I was driving an older car, a 2001 Corolla, when my daughter and her fiancé decided to move to Vancouver. She stayed with me for a couple of months prior to the move, and before she left she said, “How would you like my car? I’m going to upgrade when I get out there and I’d like you to have it.”

EVEN THOUGH IT’S coming up on ten years old, it’s a new car for me. And one of the nice things about it is they really didn’t change much about the design for a number of years, so it doesn’t look like I’m driving an older car. I think it’s aged really well. Kinda like me.

I DO THINK my daughter misses it a little bit. She always asks how her little car is doing. She loves her new car, but she misses certain things about her Nissan.

NOW THAT I’M hitting 60, I really appreciate that it is relatively high off the ground so I don’t have to stoop down low to get into it. I also do a lot of running around for work, so having the trunk and seats at standing level makes it easy to load and unload.

OH, I’M GOING to drive it into the ground. Or at least until I win the lottery. I work in childcare, you know, so that’s telling. It’ll be with me for a while.

LAST SUMMER MY husband and I and my son and his fiancé took it on a trip to Sault Ste. Marie. It’s a really ­comfortable car to take on a road trip and has lots of legroom, even for my son, who is six-foot-two. We took it to the beach every day and did some touring around the region—it was wonderful.

MY FAVOURITE THING about the car? That’s easy. Every day when I get in it I think of my daughter, Mandy. I think of her and what a nice gift she left me.