The 36,000-square-foot facility will be the largest Toyota dealership in Southwestern Ontario, and will feature the amenities of most modern car dealerships—a large showroom, car wash, café, 20 service bays and a nine-car service drive-thru.

But one unique feature of the $13-million dealership lies below ground: an underground vehicle storage area with room for 118 vehicles.

Because the four-acre site wasn’t zoned for automotive sales, the dealership had to meet community retail zoning designation and situate the building relatively close to Fanshawe Park Road. It won’t have the large parking lot associated with most automotive dealerships, but instead hold inventory in the innovative below-ground storage area.

“The ability to showcase vehicles in a dry and LED lighted environment gives our customers a level of service not seen in any London area dealership, and is part of our commitment to provide an outgoing level of customer service that we are built upon,” says owner Kevin Laurie.

Laurie purchased Competition Toyota about six years ago and committed to building a new facility. Competition is the third oldest Toyota dealership in Ontario, and has been in the same location for over 40 years.

The move will see the dealership transition to an area void of other car dealerships, but Laurie says extensive market research pointed to the area it as a desirable location. He says north London is where many of his current customers reside, and is quickly adding new, upper-end residential developments.

Annual sales projections for the new dealership will climb from 650 new and 375 used vehicles to 850 new and 500 used.

Hangar9 changes format and location as Jo-Ann Fisher steps down

JO-ANN FISHER HAS always been a moving force in the London fashion scene. She founded one of the area’s leading fashion destinations, Fisher & Company, which she rebranded and expanded as Hangar9 stores in London and Toronto. Fisher’s eye for style and her penchant for service has built a devoted following throughout southern Ontario.

Now, with the new year here, Fisher has announced that major moves are in store for her business and clientele in London.

“I’m moving on,” Fisher says. “I’m making way for my incredibly gifted daughters to carry on the legacy of Hangar9. As part of that move, we’re moving out of our old store on Richmond Street and moving up to our beautiful new fashion arcade up the street.”

As Fisher steps down from managing the family business, her daughter, Lisa Ferguson, has incorporated a Hangar9 gallery into plans for her new Accents Accessories site under construction at 620 Richmond Street.

Ferguson has operated Accents for several years, extending the family values to fashion products complementary to Hangar9’s revitalized brand. The new location, just a few blocks closer to Oxford than the current store locations, will open multiple storefronts into a shared shopping space.

“I’m so proud of how my daughters have embraced the standards that made our enterprise so successful while they advance our concept with a vision of their own,” Fisher says. “And, if you thought I was going to just fade into the background, that won’t be the case—that is not my style. I will still be there when they call. With Lisa’s leadership, Hangar9 (London) will continue to bring the area’s finest collection of personally curated designer lines to a new generation of discerning clients.”

Fisher notes that the corners near Richmond and Central are emerging as London’s newest and brightest shopping nexus. “Good neighbours make for good business. We’re happy to be opening right in the middle of it.”

The Hangar9 (London) move-out from the current store is expected to be complete by early February, with the new site scheduled to open in early spring.

“All the wonderful clients who have enjoyed our services over these many years should feel excited about this new beginning. I certainly am,” Fisher says.

WITH ALMOST 4,000 housing starts in the London census metropolitan area, 2017 was a record year for the area’s residential construction sector.

Canada Mortgage and Housing Corp. (CMHC) reported 202 housing starts in December, bringing the 2017 total to 3,967 units for the London CMA, which includes St. Thomas and Strathroy.

Peter Madsen, president of the London Home Builders’ Association, told the London Free Press he anticipates demand for new homes to remain strong in 2018, noting that some area builders have already sold out their inventory of new homes to be built in the coming year. However, he adds that market influencers, including a limited supply of services lots and a shortage of skilled labour, continue to challenge the local homebuilding sector.

Nationally, housing starts in Canada hit their highest total in a decade in 2017, but are expected to slow this year. “Canadian homebuilding activity had its best year in a decade in 2017, backed by underlying demographic support and strengthening labour markets in the country’s largest provinces,” says BMO senior economist Robert Kavcic.

However, he notes in a report that in 2018 the number of housing starts nationally is expected to moderate closer to the 200,000 level, with a record number of units under construction to start the year.

FOR HER EFFORTS to develop London’s social innovation sector, Lina Bowden has been named to the Mayor’s New Year’s Honour List 2018 in the category of Humanitarianism.

Nine Londoners have been recognized for their philanthropic achievements in the city, including Bowden for her instrumental work in the creation of co-working space, Innovation Works.

Mayor Matt Brown announced the recipients in a news release—a list of nine Londoners honoured in several categories such as arts and heritage.

“We are pleased to celebrate these London leaders,” says Brown. “On behalf of all members of council, congratulations on this recognition and thank you for the work you do to make our city stronger and better every day.”

A former partner at Highstreet Asset Management, Bowden is an advocate for social finance. In addition to her efforts in establishing Innovation Works, she spearheaded the foundation of VERGE Capital, London’s first impact investing intermediary that connects socially minded investors with social enterprises to help start and grow their social purpose business. With Bowden’s guidance, VERGE Capital has now catalyzed business in London such as Impact Junk, Textbooks for Change, For the Love of Laundry and The Old East Grocer. 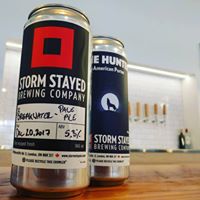 The brewery, located at 169 Wharncliffe Road South, has been in operation since a soft opening in December, but will officially open its doors to the public with its grand opening celebration from 1 p.m. to 11 p.m.

Founded by veteran homebrewers Michael Naish and Justin Belanger, the 4,200-square brewery is located at 169 Wharncliffe Road South, a location formerly occupied by The Cove Restaurant.

The brewery will offer a variety of beers, including a blonde ale, American pale ale, a Berliner Weisse (kettle-soured wheat) and a porter. The taproom will also feature guest tap offerings with beers from other Ontario craft brewers.

On the retail side of the operation, plans call for cans to be available for retail purchase in the coming weeks. In the meantime, take-home customers can opt for a ‘crowler’ can, a 32-ounce growler-sized can that allows customers to take their favourite draft beer home with them.

In addition to beer, the Storm Stayed taproom will also feature food by Emma Richard, owner of The Gathering Plate, a catering business housed in the same facility.

Hosted by the LEDC and Canada-Ontario Export Forum, this half-day seminar focuses on what it takes to become a successful exporter and delivers an overview of the key export support resources and programs that can help your business get ready to go global.