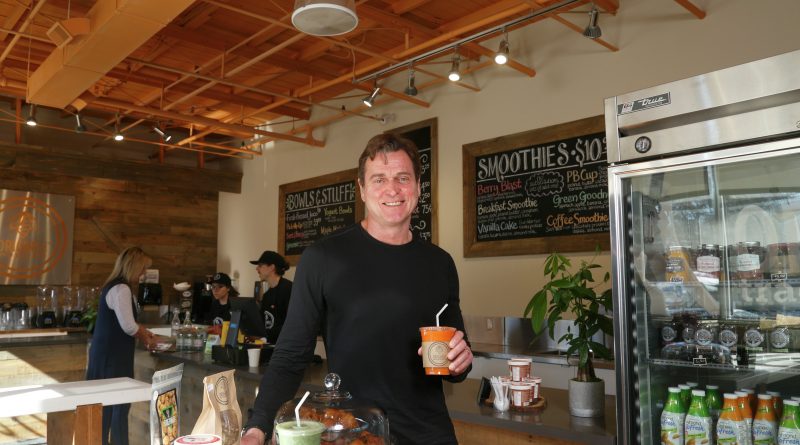 WITH THE OPENING of Origins Co. coffee shop, Peter Cuddy is back in the food business.

Many Londoners know Cuddy as the founder of Organic Works Bakery, an organic, vegan and gluten-free bakery launched in 2007.

In 2011, Cuddy and his wife, Kate Gielen—an interior designer and the owner of Gielen Design—added Organic Works café to the mix. Located at the corner of Wellington Street near Horton Street, it soon became one of the city’s trendiest eateries and was a key driver in the revitalization of the SoHo neighbourhood.

Cuddy stepped back from the bakery business after his wife was diagnosed with cancer. When she died in June of 2015, he decided to sell. “I’m very fortunate that someone who had an interest in food came along and bought it, because I probably would have run it into the ground,” he says.

After taking some time to reflect, the 60-year-old Cuddy knew he needed a new project. “I saw that this space had become vacant, so I decided to rent it,” he says. Then, he brought on Gielen’s long-time assistant, Helen Ready, to help him come up with a plan.

That was in August, 2017. By February, the former gym had transformed to Origins Co., a grab-and-go coffee shop that also serves up fresh juices, smoothies and smoothie bowls, as well as baked goods supplied by Organic Works Bakery.

Located in the heart of a student neighbourhood just off Richmond Row and next door to one of London’s busiest yoga studios, a high-end hair salon and modelling agency, the concept is designed to appeal to health-conscious Londoners with a busy lifestyle.

Ingredients are ethically harvested, non-GMO and organic wherever possible, Cuddy explains. “The health food element comes from the fact that Kate and I lived quite a holistic lifestyle,” he says. “It was an easy decision to create something that was organic.”

Produce is sourced through Pfenning’s Organic Farm near New Hamburg or the Ontario Natural Food Co-op in Toronto, and Cuddy will be working with local suppliers during the growing season. Coffee beans are ethically harvested in Ethiopia, with a portion of each latte, espresso or bulletproof coffee directed towards the Strathroy Woman’s Rural Resource Centre for abused women.

The menu will be kept simple to ensure speed and ­consistency, says Ready, who came up with the idea for the café’s walk-up takeout window. “People can call ahead, place an order and pick it up on the way to the bus stop or after yoga class,” she explains. “It’s a novelty, but I think it will catch on.”

The streamlined interior features three long tables with limited seating. “Kate loved community seating. It makes for good fellowship,” Cuddy notes. “If people want to stay for a few moments while their order is being made, they can.”

A large outdoor patio will be open during the summer months.

Cuddy acknowledges that the café and juice bar category is a crowded market, but believes Origins’ commitment to locally sourced health food, packaged to-go, will find a loyal following. “I think we could probably open another two  locations in London down the road,” he says.