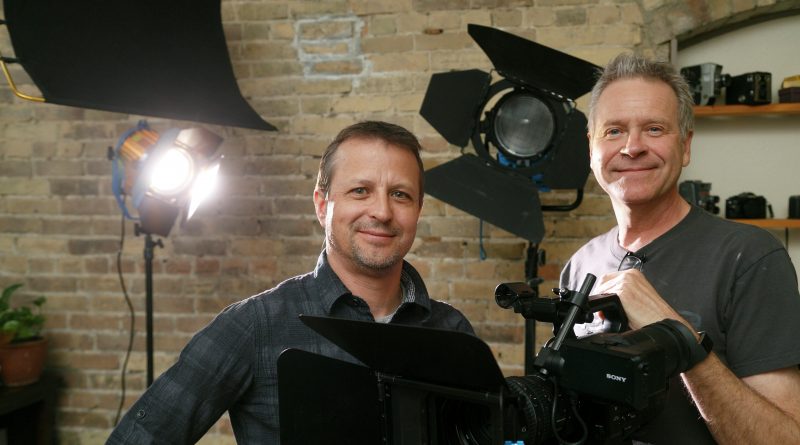 A QUIET NONDESCRIPT industrial building on York Street is the home of Matchbox Pictures, a feature film and television production company.

Nothing special about that.

What is special is the product that comes out of the 10-year-old company. Since it was founded in 2008 by Greg Sager, Gary Elmer, Geoff Hart and Dwight Coughlan, Matchbox Pictures has turned out three feature films—Devil Seed, Kingdom Come, and Gray Matter—that can be best described as, well, pretty scary.

According to founding partner, Greg Sager, the company decided to ­specialize in the horror/sci-fi genre as a matter of necessity in order to reach the largest possible demographic on limited production budgets.

Members of the Matchbox team had all been working together on various projects and productions for years, so it seemed a natural fit when Sager returned from a shoot at the Beijing 2008 Olympic Games with some “spare change” in his pocket and a proposal to establish an independent film ­production company.

“We closed down Highbury Avenue for Kingdom Come. To do
that in Toronto would have cost us ten times what it cost us
to do it here” —Gary Elmer

Armed with a script, a limited budget, a dedicated production crew and a good deal of chutzpah, the Matchbox team shot its first feature film, Devil Seed, in a little over four months, backed by Canadian movie tax credits.

The first 10 years have been a “fun learning experience,” says Sager, while his partner, Gary Elmer, says the team has “learned by trial and error with each film.”

Three films in ten years may, at first glance, seem to be pretty slim pickings, but as the partners point out, the ­company has been pretty much a part-time operation that comes together for each project.

“What happens is that we strike up a new movie, we set aside all of our day jobs and we dive full force into the project. Every member of the team wants to be there and everybody brings something unique to the production,” says Sager. “When production and ­distribution is complete, we go into remission until the next project.”

Matchbox team members all hold jobs and work freelance within the film and television production industry when not working together on a movie. Individually, team members have done a number of commercial projects for local companies and organizations like Brescia College and Old Oak Properties.

The partners say that London is an ideal place to shoot movies, and point out that the city has been very good to the company by way of making city services available to them.

“We closed down Highbury Avenue for Kingdom Come. To do that in Toronto would have cost us ten times what it cost us to do it here,” says Elmer. “We get a lot of support from the city and local businesses because we’re in a town where movie-making is not the norm. In Toronto, movie-makers are considered a pain in the butt due to the disruption they create.”

Sager says companies like Matchbox are still a novelty in London.

The partners describe their early days as “tumultuous,” waiting around for things like sufficient financing to fall into place, so they decided to jump in and prove that the company could write, produce and ­distribute a movie. Some less-than-positive reviews of their first film did not concern the partners. “Every one of our movies has been made on the catering budget of some of the movies we’ve been compared to,” says Sager.

Matchbox casts its films with actors mostly from Toronto, but two well known thespians, Michael Wilmot and Harry Edison, have appeared in its movies.

Both actors have high praise for the Matchbox team.

“Working with Greg and Gary and all the Matchbox folks is a blast,” says Wilmot. “They are continually learning, improving and doing things on a bigger and better scale, and strike me as being incredibly professional and deeply dedicated to their craft, while at the same time keeping a loose, friendly feeling on the set that makes them a joy to work with.”

The team’s latest production, Gray Matter—a movie Sager calls a “fun chase movie”—debuts on May 22. Like Matchbox’s other movies, it will be distributed on video-on-demand platforms like iTunes and Google Play, as well as DVD.

“We’re attempting to jump up to the next level,” says Sager. “At present, we’re essentially a part-time company that comes together for projects. We’re hoping to bring in some major investors so we can grow into a full-time operation, cut down on the time in between films and move into other genres like dramatic productions.”