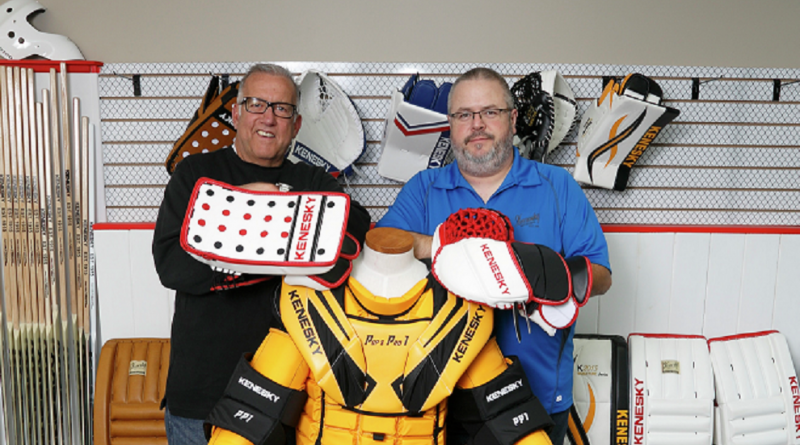 From a small manufacturing facility in south London, a storied name in hockey equipment is staging a not-so-quiet comeback

IF YOU WERE a goalie in the National Hockey League in the early 1970s, or if you watched any hockey from that era, you’d recognize Kenesky goalie pads almost instantly—their rich brown colour, tube-ish vertical ridges and horizontal leather straps were, at one point, worn by every goalie playing in the league.

First made in 1924 in a small bike shop in Hamilton by Emil “Pops” Kenesky, the quality of the pads was, at the time, unmatched, and the basic design of the Kenesky pads would be adopted and refashioned by all the major manufacturers. They are, in a way, the square root of all goalie pads.

Eventually, the pads fell out of fashion in the NHL, and in 1992, Kenesky quietly stopped making them altogether.

But now, the Kenesky brand is back between the pipes. After Kenesky Sports & Cycle closed its doors in 2015, the brand found a new home in London, where Joel Hulsman, the old store’s final owner, and Mike Howard, a top goalie equipment designer who had designed gear for hundreds of NHL players, are working hard to return the Kenesky brand to its former glory.

The comeback starts with, of all things, chest protectors. With new rules shrinking the size of goalies’ chest protectors in the NHL this year, Kenesky has found a way to get their foot in the door of the tightly controlled, but lucrative, pro goalie market—and they’re making believers out of some of the NHL’s top names.

The comeback starts with, of all things, chest protectors. Kenesky has found a way to get their foot in the door of the tightly controlled, but lucrative, pro goalie market―and they’re making believers out of some of the NHL’s top names

In 2011, Mike Howard was ready to start making hockey gear again. The London native had been making and designing hockey gear since 1982, in one form or another, but he’d always done it for other companies. He’d tried to get his own line of gear off the ground, but when that business failed to take off, he left the hockey gear world altogether, instead “building race cars and ­restoring hot rods for a living.”

It wasn’t the same. “I really missed hockey a lot. I wanted to get back into it,” he says.

At the same time as Howard was looking for a future in designing hockey equipment, in Hamilton Joel Hulsman was working hard to keep the Kenesky Sports & Cycle shop open. He’d been at the shop in various capacities for 48 years, and been the owner of the shop since 2005.

But it was getting hard to compete with online retailers and the changing retail landscape, and the Kenesky name no longer carried the same recognition after a while.

The shop was struggling, and by 2015, Hulsman was forced to close the doors. 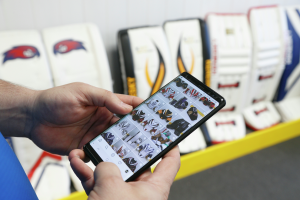 What Hulsman retained, however, was the Kenesky name—a storied brand that he’d always dreamed of reviving. Hulsman had thrown around the idea of teaming up with Howard to make gear under the Kenesky name for years, but Howard had never known how seriously to take the idea—or Hulsman himself for that matter.

“He had bugged me for years and years to bring the Kenesky name back,” says Howard. “Especially when I was doing my own thing. He’s like, ‘Why are you trying to do your own thing when the Kenesky name is just sitting here?’”

So Howard took Hulsman out for lunch one day in 2011, to pitch his own idea back to him.

Hulsman was serious. Kenesky Sports & Cycle shop was on the decline, and Howard was offering him a chance to keep the Kenesky name alive. They started raising money from investors and working out the details, and by 2015, they were ready to relaunch the goalie gear business. (“It’s baaaaaaack! Kenesky goalie equipment can be yours once again,” read the website.)

This time, though, the company left its Hamilton home, moving west to London. The move to the Forest City wasn’t so much a strategic decision as it was an accommodating one: Howard was already established in London, and didn’t want to move to Hamilton, says Hulsman.

The partnership certainly had some potential, since it brought together an experienced designer with a name that, while it was aging, carried weight in the hockey community. Over the years, thousands of players would make the trek to 228 Barton Street to Kenesky Sports & Cycle. There, Pops Kenesky would climb a set of rickety wooden stairs into a secret workshop, one that only he and his family were allowed to go, to make custom goalie pads.

Joe Bowen, the longtime Toronto Maple Leafs play-by-play announcer, remembers his dad taking him to get his pads made, and remembers that Pops Kenesky was proud of how many pros were using his gear. He says Kenesky kept a scrapbook “with pictures of all the great goalies from the past who were using his goal pads.

“I vividly remember that scrap book,” Bowen says. “Pages were coming out of it, and it was falling apart, but he was proud of this thing.”

So to see the brand come back is a big deal for Hulsman and Howard. “It was a perfect time, too, because it was the 100-year anniversary [of Kenesky Sports], and Joel knew he was closing down,” says Howard. “It was a way to carry the name on. He was really struggling with closing the store, and this alleviated the pressure a little bit.”

In any business, sometimes you can have all the right components and all the right people, and things still don’t happen the way you want them to; sometimes, all that’s needed is a foot in the door to get things started.

For Howard and Hulsman, that foot in the door started with bruises.

When the 2018-19 NHL season started, there were new rules in place that shrunk the size of goalies’ chest protectors. The idea was to get rid of any extra pieces that were there to block shots, not prevent injuries.

Pretty much right away, goalies started complaining. Brian Elliott, goalie for the Philadelphia Flyers, told the local paper, “I’m getting bruised like crazy on my arms. […] It seems like every shot that you take that’s not clean on your blocker or in your glove, it’s leaving a mark.”

Kenesky had never made chest protectors before, so it would be new ­territory for the brand. But, knowing that the rules were changing, Howard had designed what he thought was a better chest protector that was better suited to the NHL’s new specs.

The complaints about bruising were indicative of a design problem, says Howard. Other manufacturers were simply shrinking their existing chest protector designs rather than designing specifically with the new rules in mind. 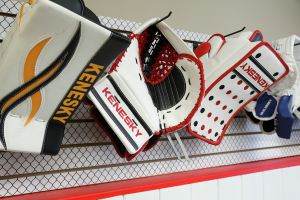 The Kenesky chest protector, called the Pops Pro 1, started getting some NHL game time after a couple goalies found it worked a whole lot better at preventing bruises. The most vocal among them has been the Washington Capitals’ goalie Braden Holtby, who started wearing the chest protector this season and became a sort of ­unofficial ambassador for Kenesky. He’s been talking up Kenesky gear to other players, says Howard. Other goalies, including Mike Smith (Calgary Flames), Roberto Luongo (Florida Panthers) and Craig Anderson (Ottawa Senators), have also switched over to Kenesky chest protectors.

Now, Howard and Hulsman say they’re getting calls every week from top-level players asking about gear. “It’s just ballooned,” says Hulsman. “Holtby’s been the big contributor to that.”

Howard hopes the custom manufacturing and attention to detail will distinguish Kenesky from bigger companies, many of whom are offshoring their manufacturing to China.

“I think that when you’re a big, huge manufacturing company, the personal touch gets lost,” says Howard.
(It’s worth noting that Vaughn Custom Sports, one of the largest ­manufacturers of goalie equipment, is based in London, as is Eagle Hockey, a manufacturer of player gloves and pads.)

Getting Kenesky gear into the NHL is not immaterial to the company’s growth strategy. As a custom gear manufacturer, they aren’t looking to move as many products as their bigger competitors, so word-of-mouth among serious players is the best form of marketing for them, says Hulsman. 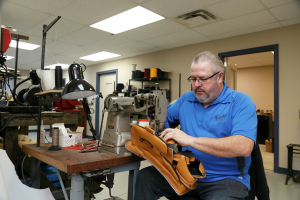 Getting a pair of goalie pads in the NHL would go a long way to driving more sales, so the next step will be to try to get a few goalies to switch to their other gear. “You gotta hope and pray that maybe a guy like Holtby—he doesn’t change his equipment all that often—maybe his next set [of pads] will be a pair of Keneskys,” says Hulsman.

Hulsman says that, for now, they’re focused on growing cautiously, keeping a keen eye on cash flow and the bottom line. “The NHL wants like $130,000 [logo/marketing fee] for blocker, trapper, pads,” says Hulsman. “So, you can’t go in there with one guy—you gotta go in there with three or four or five guys.”

One of his dreams is to see Kenesky pads back in the NHL, and he’s hopeful about it.