His wife, Anne, co-owns and operates the business, which employs seven.

The couple will celebrate their 31st anniversary in May. They have three children—Candice, Mark and Ben—as well as two grandkids. Lyons, 56, is vice president of the Fanshawe Optimist Club and golfs regularly. Two years ago, he started teaching in the Retail Meat Cutter Pre-Apprentice program at Fanshawe College.

Many Londoners will also know his voice: For the last 12 years, he’s been the in-stadium voice for Western Mustangs football and hockey games.

How long have you been a butcher?

I have been a butcher for coming on 40 years now. I started part-time at Sullivan’s Old North Market. The day I finished high school, I started full-time. Bob McKeon, my mentor, taught me for 13 years, and I cannot thank him enough for all that he and his wife, Nancy, did for me. After Sullivan’s, I moved on to Knechtel’s in Port Stanley, where a friend was the store owner, and worked there for five years. By then, we were ready to open our own place.

Anne and I had gone to school with the owners of Bellamere Country Market. When I asked why they didn’t sell meat, they said they knew nothing about it. I said, “Pick me.” We were there til the end, and fortunately, we had opened a second location in Covent Garden Market, so the transition to one store was relatively easy.

When and why did you decide it was something you wanted to do?

I was not an overly ambitious kid when it came to school, so when Bob asked if I wanted to be a butcher, the answer was, “Hmmm, school or go to work?” Not a difficult decision to make at the time. Turns out I had a bit of a passion for being a butcher. Hindsight being 20/20, perhaps I should have stayed in school. I think having worked at the college for the past couple of years, I would have made a pretty good teacher. Nonetheless, things have certainly worked out pretty well.

You were among the first merchants in the new Covent Garden Market in 1999. Why did you choose downtown?

We were approached by the market’s general manager. They wanted new butchers and, of course, we thought it would be a great fit for what we were trying to do. Bellamere was a destination, while downtown would offer much more local foot traffic, which we thought would help with the ups and downs of the seasonal aspect of Bellamere.

How has the market—and its surroundings—changed since then?

I am a big proponent of just about all things downtown. I love the diversity. We get every demographic going in our market—truly a great thing. There are, of course, some difficulties, but most people seem to understand that we need to work together to help those who are having a hard time. There has been so much growth, lots of building, new restaurants, Bud Gardens. Really becoming a hub for people again, which is fantastic. 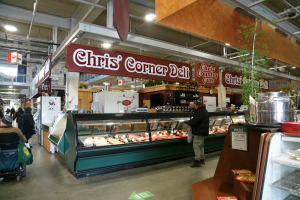 What aspects of your job do people not understand or know about?

Most people think the product walks in the door looking like what it looks like in the counter. Not true. We have to work our magic. Everything we do takes place on our two little butcher blocks, so yes, you can come on in and watch us do our thing.

We’re also more than just butchers—we know what cuts of meat you can use for what types of recipes and how to cook everything. We routinely suggest other cuts to make the same recipe, as the one it calls for will not work as well as what we have suggested.

We’re also able to take a whole animal and break it down into all the retail cuts—not something that happens at every shop. I truly believe that you get exactly what you pay for, and that includes the expertise and experience my staff and I can offer.

What training or certification did you need to get started?

When I became a butcher, there was only a course at one of the local colleges, not Fanshawe, where you could learn. So, technically, I have no papers. I learned on the job, from Bob, who was willing to teach me everything he knew. There are now a couple of schools involved and you can get papers. But while you can get papers, it is not considered a Red Seal trade, so it is not mandatory. You can just go and start working.

Fanshawe has started a Retail Meat Cutter Pre-Apprentice program. It is a joy to teach there. It has run the last two summers at the main campus, and this summer will switch to the downtown campus. Pretty darn handy for me. After finishing the program, our students then do a 12-week work program in the industry and then, hopefully, get signed on as apprentices.

What’s the job market like for a qualified butcher?

There is a dearth of butchers out there. I had a gentleman with me for years who retired at 75, and the only person I could find with any experience was actually older than he was. Not exactly helpful for the succession planning. That is why the program is so important at Fanshawe. There are no butchers out there. 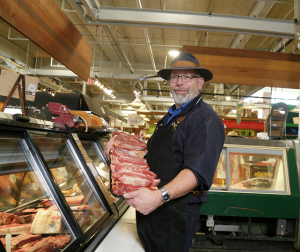 The average work day for me begins at 6 a.m. I balance the till from the previous day, uncover the counters, make a list of what we need and place orders for the next day’s delivery. I cut whatever needs to be filled, make sausage, prep for the next day, do any orders for that day. Maybe grab a coffee in there somewhere. Typically, I work until three-ish, and I have great staff members who serve the after-work crowd and close-up shop. Obviously, at times like Christmas, the day starts much earlier—3 a.m. to 4 a.m.—and runs later, but that is what happens when your name is on the sign.

Best part of your career?

It’s twofold. Firstly, the people. I like to talk, and when the conversation is about something I know about, you cannot shut me up. So, helping people with their food life is awesome. Secondly, my schedule has allowed me to pursue other things. I get to go to Western and announce football games. I was actually the in-stadium announcer for the Toronto Argos a few years back. Very cool!

The worst part is I am getting a little long in tooth for all the heavy lifting. Everything we carry is a minimum of 50 pounds, and perhaps the early mornings are starting to wear on me a bit. I need to hire a young gun who wants to learn and does not mind doing the lifting.

How has increased interest in vegetarian choices affected you and your business?

I do not quite understand the vegetarian/vegan lifestyle, but to be fair, to each their own. It has not hurt our business. In fact, we quite often get people who are vegetarian shopping for their partners who are not. They don’t know anything about meat and trust us to help them make those kinds of decisions.