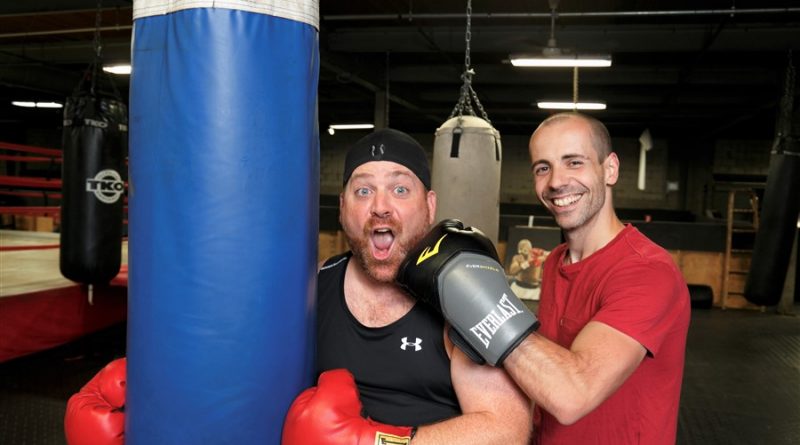 A continuing series highlighting the advancements of our 20 Under 40 program alumni and 20 Under 40 Foundation supporters. This installment features Brett Lucier (Class of 2016) and Adam Malamis (Class of 2018).

BREAKFAST IS ADAM Malamis’ secret weapon. When the founder of web design firm Simalam went looking for a partner to help launch Fight to End, a charity boxing event raising money for Youth Opportunities Unlimited (YOU), he reached out to fellow 20 Under 40 alum Brett Lucier and pitched him the idea over breakfast.

“He thought, ‘Who could I dupe into helping me out with this?’’ jokes Lucier, the president of Provincial Glass & Mirror. “His secret is he brings people out for coffee and breakfast. Before I’m fully awake, I’m signing on the dotted line.”

On November 13 at RBC Place London, Lucier and Malamis will stage the inaugural Fight to End, which will see local entrepreneurs, business leaders and politicians going head-to-head in the boxing ring for three, one-minute rounds, with all the proceeds supporting the development of a youth shelter in the city’s east end.

“I’ve been told by my coaches that I better win in the first round, because there’s no way I’m seeing round three” —Brett Lucier

“There’s a number of systemic issues in London, things like poverty, hunger, homelessness,” says Malamis. “Brett and I came together and decided that we could put on a flagship event that would address all of that and include the business community.”

Malamis had heard of similar charity boxing events in other cities and thought the idea would work in the Forest City as well. But that meant creating an event from the ground up. Neither of the two are, by trade, event planners, but they wanted to do more than sit on a committee and hand off duties to someone else to execute. They wanted to be involved virtually every step of the way.

“We realized we were taking big swings,” says Lucier. “To start your own event from scratch and try and learn the ins and outs of planning everything, it was a pretty big undertaking.”

The pair say they’ve had a tremendous amount of support from YOU, and emphasize that every dollar they can raise is going to real, tangible investments for the city’s at-risk youth population.

“The key differentiator for this event is that we are supporting infrastructure and capital investment,” says Malamis. “When we talk to potential sponsors, participants and stakeholders, and they ask where the money is going, well, it’s going to actually provide beds and support the maintenance of those beds. We’re giving people a place to sleep with this event. That’s really key.” 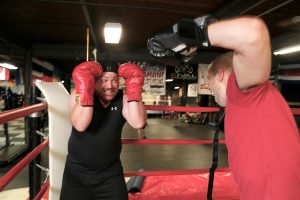 For participants, the event offers more than just charity appeal. All participants—and there are about an equal number of men and women—are getting 14 weeks of training at Warrior Boxing, and will be officially “carded” as amateur boxers in Ontario before stepping into the ring (which also covers off liability issues for the event).

“We want it to be like a Vegas-style, FightNights type of thing,” says Lucier.

Boxing, says Malamis, has an obvious appeal that most people, whether they follow the sport or not, is easy enough to understand. “Anybody can get up and punch each other, and people get it,” he says.

“That’s how we sold it,” adds Lucier. “I remember getting up in front of a room of about 40 or 50 people and saying, ‘Have you ever wanted to punch someone in the face?’”

It worked: the pair got more than enough signups to fill the card of 16 bouts they’re aiming for.

Though the two won’t get to fight each other—Malamis has about four inches on Lucier, according to the event’s website—they are both going to step into the ring to face separate opponents. Which means, on top of everything else, that they better whip themselves into shape—and fast.

“One of us clearly needs more conditioning than the other,” says Lucier. “I’ve been told by my coaches that I better win in the first round, because there’s no way I’m seeing round three.”