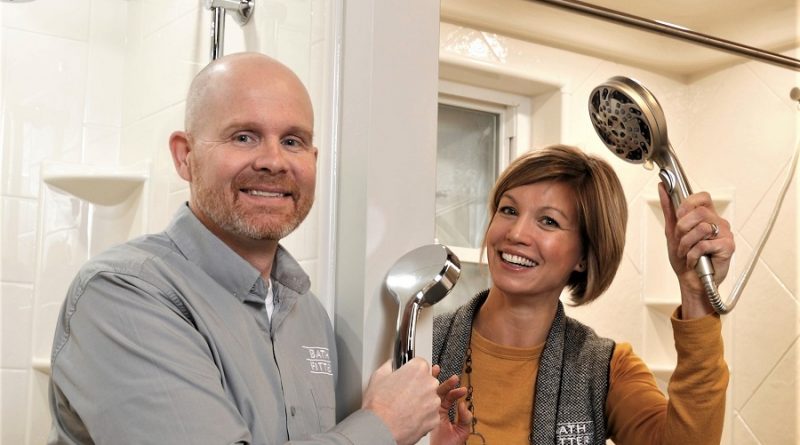 NEARLY 30 YEARS ago, back in the early 1990s when the concept was still relatively new to consumers, if you wanted to get a bathtub liner installed in London you would’ve visited a “little teeny-tiny shop behind Home Castle Windows,” where Matt Currie’s father ran the city’s first Bath Fitter franchise.

They didn’t need much more than that. “There was a time when we literally had one design,” Currie recalls. “It wasn’t hard to show that off.”

Everything since then has been a story of steady, constant growth. The concept of a new bathtub that fits over your old bathtub has grown in popularity. The Bath Fitter business, first founded in Montreal in 1984, has now grown to more than 250 franchises operating in Canada and U.S and two ­production facilities, one in Quebec and one in Tennessee.

And from that initial shop on First Street, Bath Fitter London has grown, too. “We moved over to Pacific Court, and in there we expanded three times,” Currie says. “We needed more space.”

“What we do is a little bit unconventional,” adds Matt’s wife and co-owner, Carollyn Currie. “When people can actually see it, and we can explain it to them, there’s an appreciation for how nice it is.”

“We wanted our personalities as a company to come through in the entire place. We’re proud of the building, proud of the way it looks, proud that we’re evolving” —Matt Currie

The Curries, who took over the franchise from Matt’s ­parents around 2008, are certainly no strangers to moving. But their latest expansion to a brand new showroom on Oxford Street East is a big one even by their standards: a seven-month long renovation of a building they now own, with nearly 50 per cent more displays, much of the work done by their own staff.

“We wanted our personalities as a company to come through in the entire place,” Matt says. “We’re proud of the building, proud of the way it looks, proud that we’re evolving.”

So, how much can the bath ­retrofitting business change? Quite a bit, it turns out, a fact to which the Currie’s new showroom is a testament. On top of constantly evolving stylistic evolution, the bath retrofitting business tracks alongside trends in both healthcare, as the population ages, and real estate, as London’s housing market evolves.

“In our previous showroom, we had 22 displays and I think we showed four walk-in showers. We now have 32 displays and half of them are walk-in showers,” Carollyn says. “The market is getting older. We’ll have put in Bath Fitter walls 10 years ago, but now they’ve realized their needs have changed.” 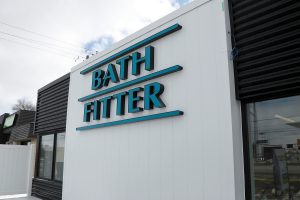 Likewise with real estate. There’s lots of interest in renovating older, ­bungalow-style homes in areas like Wortley Village and Old East Village, which often pose all sorts of architectural challenges.

“There’s a large part of the city that are storey-and-a-half houses, and a lot of bathrooms will have the bathtub wedged in under that sloped ceiling,” Matt explains. “So, we built a display to show how we can accommodate that.”

As they settle into their new digs, the Curries are already looking towards the future. The new showroom is “more current with technology,” Carollyn says. They’ve also invested in the warehouse and inventory side of the operation, are fine-tuning expanded hours of operation and are eyeing another showroom in the Clinton-Goderich area.

In short, there’s more going on in the bath retrofitting business than most people would assume. “We feel like we’re overloaded with decisions,” laughs Carollyn. “Maybe we’ll take a breath and take a vacation.”