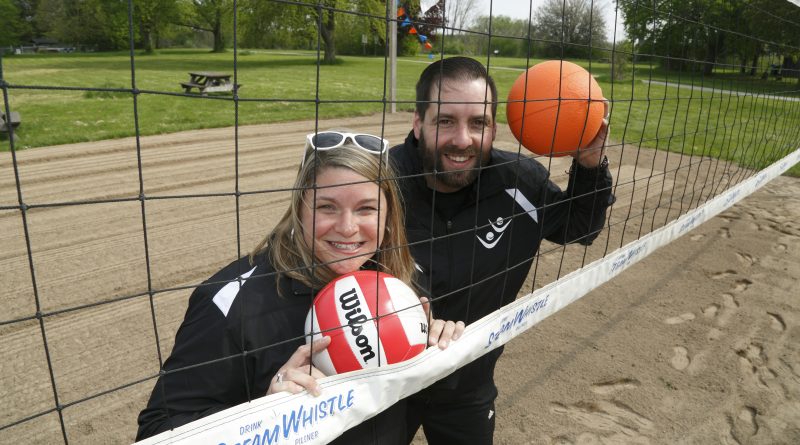 LONDON IS HOME to dozens of indoor dodgeball teams, but this summer the Forest City Sport & Social Club (fcssc.ca) will bring a new experience to the city with the introduction of a beach dodgeball league that will play on six newly refurbished courts at Fanshawe Lake.

“We’ve brought the beach courts back to life and now have the city’s biggest outdoor beach volleyball complex, and this year we’ll also be hosting beach dodgeball—a first for London,” says Kyla Woodcock, founder and director of FCSSC.

FCSCC has a long-term lease arrangement with the Upper Thames River Conservation Authority, and has invested upwards of $35,000 to create and update the courts.

“We’ve added a campfire pit, Adirondack chairs and more picnic tables, because we’ve found that people like to hang around and socialize after their games,” says Woodcock. “They can share a few laughs, bring a guitar, enjoy the sunset—like a mini-vacation during the week.”

With the summer season being as short as it is in this part of the world, everyone wants to get outside when they can. FCSSC has league play scheduled on the courts Sunday through Thursday nights and weekends are usually booked with tournaments, charitable and corporate events or private rentals.

“We have a number of corporate teams, with co-workers coming out to play together and build relationships outside of the workplace” —Kyla Woodcock

Woodcock founded FCSSC in 2009, mainly because, like many newly graduated college and university students, she missed the sports and social clubs she had been involved in on campus. “I was a football player with no place to play,” she says. “I wanted to create a place where folks who are no longer students could make connections with others.”

While the majority of FCSSC members are in the mid-20s to early-40s age range, Woodcock is pleasantly surprised by the array of ages she is seeing. “We have a number of corporate teams, with co-workers coming out to play together and build relationships outside of the workplace. And we have seen moms and daughters or fathers and sons join a team—it’s something they can come out and do together every week. Our youngest member is 19, and our oldest is over 60.”

FCSSC has more than 18,000 unique members who participate in the more than 1,200 teams that run each year, most in co-ed sports that range from soccer and softball to basketball and lawn bowling. Over the last few years, Woodcock has also added more social activities that are not sports related.

She employs four full-time staff to keep up with it all, and has expanded her geographic reach by adding activities in St. Thomas and Woodstock, as well as opening a sister club—the Rose City Sport & Social Club—in Windsor in 2014.