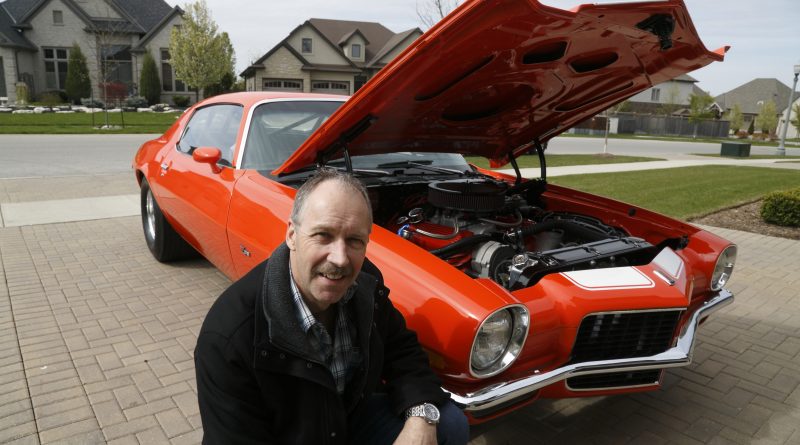 I PURCHASED THIS car in the spring of 2000, and it’s a bit of a funny story. I saw it listed in The London Free Press and called about it. A guy answered and I told him I was calling about the car for sale. He said, ‘What car?’ I said the Camaro. He paused for a bit, and then said, ‘Oh. She did put it in the paper.’

HE HAD OWNED the car for 25 years, and apparently his wife had given him an ultimatum the previous November: fix it up or it gets sold. I was the first one there and I bought it on the spot.

WE SPENT EIGHT years restoring the car. My son and I stripped it down to every nut and bolt. The chassis, suspension, fuel delivery system, electrical, all the sheet metal—it’s all been redone.

IT’S WHAT YOU call a Pro Street car. It’s basically a drag race car you can drive on the street.

YOU COULDN’T PUT a dollar value on the amount of labour involved in the restoration. Thousands of hours went into it. My son and I travelled as far as Pennsylvania to collect parts.

I PUT ABOUT 500 miles a year on it. I’ll drive it to work the odd time, but mostly I’ll go out for a cruise night or a parade.

I SPENT SEVEN years drag racing when I was younger. It’s a very individual sport and it really didn’t suit family life. So, as kids got older and I got back into cars, this was ideal—it’s something that can be enjoyed together.

I’VE NEVER RACED it, and I don’t think I would. But if I did, I wouldn’t tell my insurance company.

IT’S A TWO-SEATER. It would have been nice if I had been able to maintain a backseat, but the rear wheels are 18-and-a-half inches wide each, so the wheel wells took up the space.

INITIALLY, WE OUTFITTED  it with a 25-litre fuel cell. But it was too small—there were a couple of occasions when my wife and I didn’t make it through a cruise night. So we swapped it out for a 40-litre cell, and now it probably gives me two hours of driving time—as long as it’s just cruising speed.

I THINK THIS is the eleventh car I’ve completely rebuilt, and it will probably be the last. I’ll just drive this one and keep it running well. I’m getting too old to crawl underneath a car.