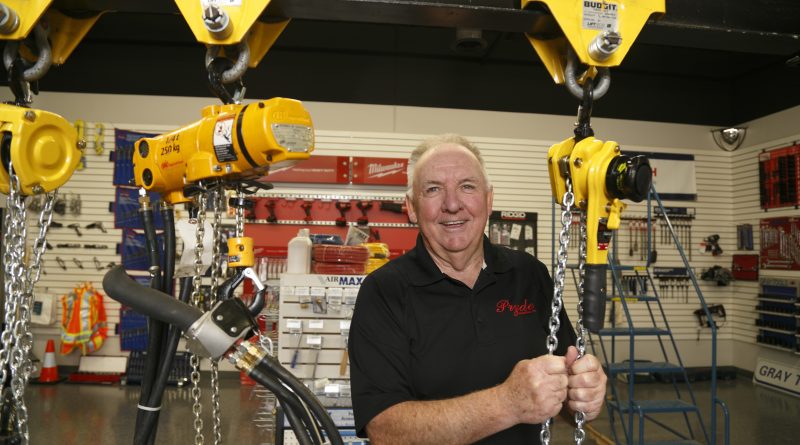 Continuing to grow and diversify a large client list, Pryde Industrial
comes out from hiding

THE WATCHWORD AT Pryde Industrial is diversification. And also integrity. And also family. Okay, so the business has a few watchwords. But that’s alright, because it also has a few products—nearly 500,000 SKUs that it sells to buyers large and small all across the country.

Last fall, it moved from a hard-to-find location on Newbold Street to a very visible storefront on Exeter Road. At 8,000 square feet, it’s roughly twice as large as the old location, just the latest chapter in a story that started in Ron Pryde’s garage in 1983 with three customers, a dream and a business plan.

“I began with three customers, Ford, GM and Chrysler,” Ron says. “Today, we have 8,000 customers in our database.”

Among the company’s 15 employees are Ron’s daughter, Robin, who is operations manager, and his son, Cory, who is vice-president.

“A lot of our customers like dealing with a family business,” Ron says. “You have to provide the products and service, but many times I’ve heard back from customers saying how much they appreciate not just being a number dealing with a large corporation.”

Pryde Industrial is best known for selling pneumatic tools to manufacturers like Siemens, Magna and a host of other auto parts makers. Its biggest supplier is Ingersoll Rand, the U.S. maker of tools, material handling products, refrigeration equipment and golf carts, among many categories.

“I began with three customers, Ford, GM and Chrysler. Today,
we have 8,000 customers in our database” — Ron Pryde

As it grew and began selling more products to a wider array of customers, Pryde joined Independent Distributors Inc., a buying group with more than 150 members across Canada. That association helps the company not only buy at the best prices but also creates connections that allow it to sell across the country.

“Once we were in the plants selling tools and material handling products, we thought we could diversify and get into commodities,” Ron says. “So we now sell all kinds of commodities and tools, hard hats and things like that. Toyota is our biggest commodity and tool customer, and we sell to Ford and many other places as well.”

Consumers may know Pryde best because it does repairs and warranty work for nearly every retailer of power tools and household gizmos. Roughly a quarter of Pryde’s annual business comes from warranty work for Lowes, TSC, Canadian Tire, Rona and others. Earlier this year, Husqvarna asked Pryde to begin selling its products and doing warranty work.

“They just walked into the store,” Ron says with a laugh. “That’s really something. This location has much better visibility than where we were before.”

Some 35 years after he started the business, Ron still loves working. He takes time off to play hockey and golf, but he gets just as much pleasure walking around the warehouse, mingling with his loyal staff, many of whom have been with him for a dozen or more years.