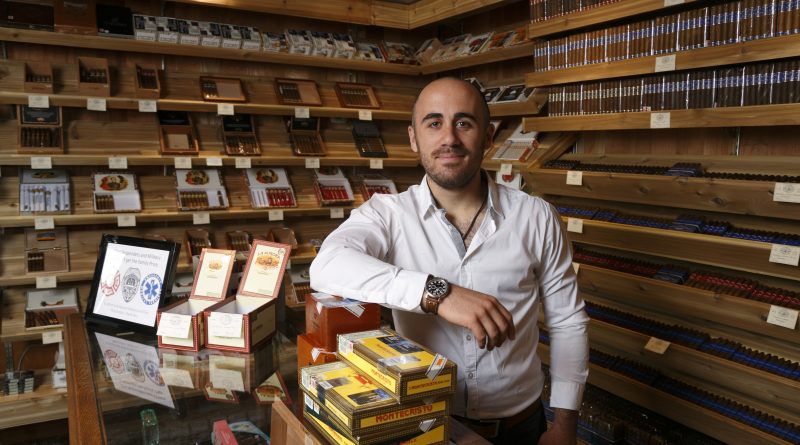 Governed by laws restricting tobacco advertising and promotion,
a cigar shop turns to tradition and technology to build a buzz

IF YOU’RE DRIVING down Horton Street one warm summer evening, you might be surprised to see people sitting on the patio of a local business, puffing on cigars.

Opened locally last October, Havana Castle is a premium cigar franchise founded in Oakville in 1996, with additional branches in Mississauga, Burlington and Toronto.

Because cigar smoking is often a social activity, Donovan says it was important to Havana Castle London owner, Murray Good, for customers to have a place to sit and socialize on-site—somewhere networking and conversations could take place during the hour or two it often takes to smoke a cigar.

“We are a destination business for people who are willing to pay for quality things that are not a necessity. This is a small but very engaged community” — Andrew Donovan

The day-to-day operations of the store are handled by Donovan and co-manager, Kate Hermans. Both are twentysomethings, a demographic cigar sellers are actively catering to these days. As well as running the store, the two employees are also responsible for driving traffic and sales for the business—no easy feat when you are hemmed in by laws that restrict or prohibit you from public event sponsorship and advertising of tobacco products, even on social media platforms.

So how are they raising awareness and building a client base for the newest cigar shop in town?

In many ways, the shop relies on traditional, tried and true retail strategies. For example, Donovan says a visible location and signage are key. “We’re on a major artery. More than 25,000 cars travel Horton Street every day.”

He’s also found that by being in close proximity to the core, and by staying open to 9 p.m. on Friday and Saturday nights, the shop is drawing in people of his generation who will come in for a cigar before heading to a downtown bar on the weekend.

“We see everyone, from the traditional guy in a suit to the blue-collar worker who gave up cigarettes but still like an occasional smoke to millennials who appreciate that this is a handcrafted product,” Donovan explains.

He likens cigar tobacco to other artisanal products—coffee, chocolate and wine, for example—that reflect the terroir in which the coffee or cacao beans or grapes are grown. “We are a destination business for people who are willing to pay for quality things that are not a necessity.”

The majority of customers are buying $13 to $17 cigars, but Donovan says the store’s selection ranges from $2 cigars at the low end all the way up to $90.

A lot of customers find Havana Castle through word of mouth or a web search, but the shop also employs a handful of additional strategies to raise visibility and extend reach. “There are a couple of golf courses that sell our house brand cigars in the pro shop,” explains Donovan. “We put them in a humidor with our name on it, and during tournaments we will set up a tent and table at the course.”

The business has a presence on Facebook, Instagram and Twitter, but it can’t use any paid advertising tools to boost its visibility. Instead, there is a heavy reliance on personal engagement to drive new and repeat business—individualized service when people walk into the store, an atmosphere that is comfortable and welcoming for women as well as men, hard-copy invitations to upcoming promotions or events handed out at the till, a weekly email sent out to more than 200 subscribers and a monthly draw that can only be entered with a paper ballot filled out in the store.

Donovan has also introduced a cigar-of-the-month club. “People receive a nice array of cigars, about $80 worth for $60, plus discounts on their purchases of cigars and accessories, and every month there is at least one cigar in the package that is exclusively for club members.”

In addition, Donovan recently set up a YouTube channel and has started to post video reviews and how-to segments. “Now people are sending me ideas—the proper way to roast a cigar or suggestions for cigar reviews,” he says. “This is a small but very engaged community.”