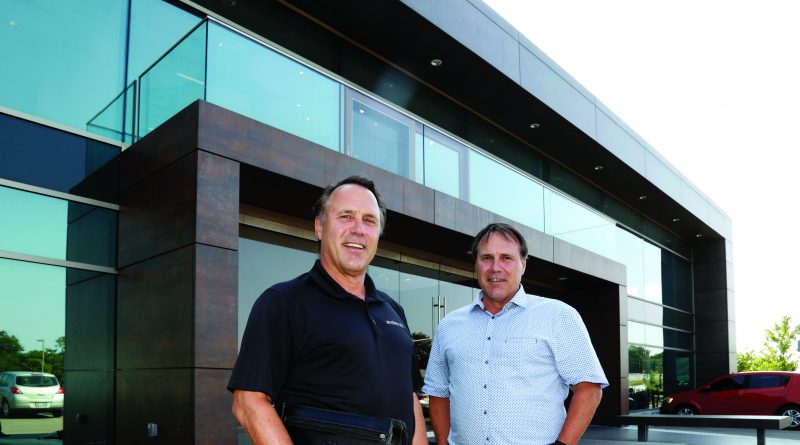 WHEN THE CANADA Science and Technology Museum reopens this fall in Ottawa after three years of renovations, it will feature a healthy component of London content. The sleek, angular exterior will be clad with a ceramic product from Elemex Inc., which uses a process at its Admiral Drive factory that would fit in very nicely as an exhibit at the rejuvenated museum.

It’s not necessary to travel that far to see Elemex (www.elemex.com) projects, however. The company’s new-age cladding has been used in projects at St. Joseph’s Hospital, Fanshawe College, the London Roundhouse, the downtown Century Building and on the company’s own 34,000-square-foot facility, which opened in January, 2016.

“Our new technology allows us to do complex shapes and interesting designs,” says Jim Gross, the Chicago-based sales and marketing director who joined the company two years ago. His arrival was one part of a strategy to dramatically expand the sales reach of the company, which for many years had been successful focusing primarily on projects in Ontario alone.

Elemex is part of an integrated collection of companies owned by twin brothers Phil and Bob Macdonald. Their father, John, created J.A. Macdonald Ltd. in 1963. It continues operating today, installing ceiling and wall systems, both interior and exterior. A quarter century later, the family founded Ontario Panelization, which supplies and installs a variety of exterior veneers for businesses and public buildings. It clad the iconic 3M building on Tartan Drive with granite slabs, among many other projects.

“We’re working to penetrate the U.S. market. We’re getting the word out to architects about the benefits of our products” — Phil Macdonald

Also in the mix is Woollatt Building Supply, which has operated for more than 100 years and provides dozens of products to builders in London and beyond.

Elemex was created to sell cutting-edge facade surfaces and systems to customers across North America, largely south of the border. The company is building a network of licensed installers, but primarily sells custom facades and supporting systems directly to builders.

“We’re working to penetrate the U.S. market,” Phil Macdonald says. “We’re getting the word out to architects about the benefits of our products.”

The products fall under two broad categories. Ceramitex is sintered ceramic panel, available in a variety of sizes, textures and colours. It’s UV resistant, non-combustible, weather resistant and amazingly graffiti-proof. It gives architects almost limitless possibilities, when combined with the company’s Unity system of attaching the panels to the building—indoors or outdoors.

Elemex imports the panels from Spain and uses laser cutters and other high-tech equipment in London to prep them for each custom order.

The other category is Alumitex, which is a lightweight panel consisting of two aluminum sheets bonded to a non-aluminum core. It too can be used indoors or outdoors and is weather proof, UV resistant and easy to use with the same Unity installation system.

“We provide the full system of custom sizing, joint placement, as well project management and everything needed for each custom situation,” Gross says. “We’re selling a system, not slabs.”

While Ceramitex and Alumitex are the latest and greatest at the moment, giving designers and builders advantages they’ve never before enjoyed, Elemex is not putting all its shingles in those two bins.

“We’re set up to always be looking for the next technology and incorporating it into what we offer our customers,” Macdonald says. “That’s how we created Ceramitex and Alumitex, and it’s what we’ll continue doing.”

Elemex employs about 150 people in London. The new headquarters features many of the company’s products, inside and out, and is ready for growth. There’s room for additional employees as sales in the U.S. increase. Phil Macdonald will move his office into the building from next-door Woollatt this fall.

“Awareness in the U.S. is growing,” Gross says. “We have about 25 projects in various stages of development.”

Particularly promising is a project with SunTrust, a bank with about 1,400 branches in the American southeast. “Ceramitex is the basis of their signature branch design,” Gross says. The bank has ordered panels to build 10 branches using its new design in Florida, Virginia and Tennessee. It has plans to build 80 new branches in the next five years. And it could decide to retrofit all its existing branches at some point.

Elemex is also working with a credit union in Texas on a similar project.

A key to growth in the U.S. is meeting local building codes. Tests on the product in Miami Dade, where hurricanes are a regular threat, will give the product the imprimatur to be adopted elsewhere more quickly. Last month, Elemex received certification in New York City as well.

“Once we get these certifications, it removes all the hassles and things move more quickly,” Gross says.

For all its success in the U.S., the most interesting application may well be the Canada Science and Technology Museum, where officials plan to project images and videos on the outside of the building—literally shining a spotlight on the versatility and design potential of Ceramitex.