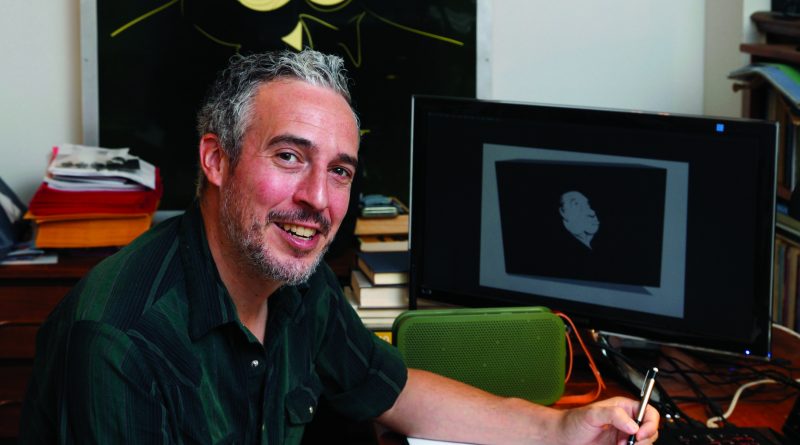 After more than a decade in the freelance world, award-winning illustrator
Antony Hare heads back to school

THERE’S A GOOD chance you noticed the black-and-white illustration of Vladimir Putin staring out from the front page of the March 3, 2012 edition of The Globe and Mail. But you probably had no idea that it was drawn in London.

Creating visuals that have the potential to reach a global audience while working in relative anonymity is all part of the job for freelance illustrator Antony Hare.

It’s an impressive portfolio, but as a freelancer, Hare still needs to hustle for the next assignment. “The wolves are still very much at the door, and that is okay,” says Hare, sitting at his desk in his downtown home office.

“There’s some quality to my work that makes it recognizable as mine. It’s a blessing and a curse” — Antony Hare

The uncertainty of freelance life is a far cry from the stability of the academic career Hare envisioned when he made the move from Halifax to London to study economics and philosophy at Western University.

“I thought I would become a professor because both my parents were academics,” he says. “I had never considered the pure freedom of working on my own.”

Hare had “doodled for pleasure” since his childhood, but didn’t think it could lead to a career. His doubts remained, even after completing a year at the Ontario College of Art and Design.

“I felt I could not draw,” he says. “At 24, I still didn’t have the skill. So, I started drawing everything around me, and that changed everything.”

Hare had also been building websites for fun since the mid-1990s, and when he applied for an art director position at the newly formed interactive division at Tribal DDB in Toronto, he got the job.

Hare describes the advertising world of the early 2000s as “a revolving door.” He began to lay the groundwork for a freelance career by sending out postcards of his illustrations to media industry professionals. In 2006, he moved to London to cut expenses and made the leap to full-time self-employment.

Hare’s first big break came with the National Post, which led to gigs with The Globe and Mail, Report on Business, Toronto Life, and then Esquire UK and other large European publications.

He opened an animation division in 2012 in order to offer clients the option of a moving image.

And although his illustrations look like they are drawn using traditional pen and ink, Hare works in Adobe Illustrator using his own vector inking style. “There’s some quality to my work that makes it recognizable as mine,” he notes. “It’s a blessing and a curse.”

As a freelancer, Hare says he keeps the ball rolling through a combination of “pure marketing, figuring out where to put my Instagram posts and relationship management. I’m never just waiting for work.”

Now 41, and with two young children, he is ready for the next stage of his career. This fall, Hare returns to the classroom to teach illustration at Fanshawe College.

“I’ve always wanted to teach. But practically speaking, it would be nice to get some financial security and maybe a health plan,” he says. “It’s about finding the balance between worrying where the next pay cheque is going to come from and being the happy, productive artist.”