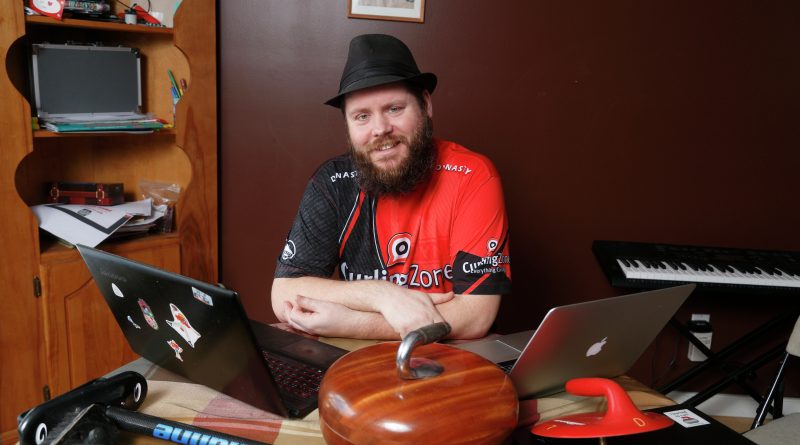 A pioneer of curling analytics, big success at the 2018 Winter
Olympics puts Gerry Geurts in the house

WHEN SWEDEN’S TEAM Hasselborg won the women’s curling gold medal at the PyeongChang 2018 Winter Olympics, it was also a victory for Londoner Gerry Geurts.

Geurts is the founder of CurlingZone.com, the world’s largest independent curling website, and a pioneer of curling analytics. He worked with Team Hasselborg leading up to the PyeongChang games to develop a ­tactical approach to each match, which ultimately helped the Swedes dominate the Olympic competition.

“Statistically, Team Hasselborg is the best women’s team on the planet right now. But if you go back two years, they were ranked in the 20 to 30 range,” says Geurts. “They went from an outsider team to winning the gold medal in two years, as a team that utilized statistics and analytics to be better.”

Geurts didn’t work directly with USA’s Team Shuster in preparation for the Winter Games, but the men’s gold medal-winners acknowledged the contribution his ­presentations to the USA High Performance curling ­program made to their Olympic success.

“I was surprised that they referenced my role,” says Geurts, who participated in a camp with six USA curling teams—including Team Shuster—in the spring of 2017.

“There are huge growth opportunities. The numbers are still very rudimentary. There is so much more to be learned about
our sport” —Gerry Geurts

“I explained the concepts, and showed them what they are already good at, where they can improve, and how they can track and follow their progress,” he says. “I was able to show Team Shuster their profile compared to the top ten teams around the world. They compared ­favourably with them all, so I think I was able to build their ­confidence to the point where they felt they belonged.”

Like the curling teams on top of the podium, Geurts’ overnight success is built on a long history of hard work and a passion for the sport.

Geurts grew up in the small rural community of Crediton, near Grand Bend. He remembers watching curling on the CBC before being introduced to playing the sport during a school field trip. “Then the call for the high school curling team went out, and it’s been an interest of mine ever since,” the 39-year-old says.

Geurts launched CurlingZone.com as a passion ­project in 2000. Thanks to his background in IT, the site expanded from an online forum and information portal to include a live scoring engine that was quickly adopted by tours across the country.

In 2003, Geurts became executive director of the Ontario Curling Tour, a position that opened doors and led to further opportunities within the sport. He ­currently also serves as operations manager with the World Curling Tour, head statistician with the Grand Slam of Curling and statistical analyst with USA Curling.

In 2005, Geurts teamed up with fellow curling ­aficionado Dallas Bittle and George Karrys of The Curling News to publish the Black Book of Curling. The book included new statistics for the sport, looking at things like hammer efficiency, force efficiency, steal efficiency and steal defense efficiency. The third edition in 2007 would be its last, but Geurts’ work caught the attention of the U.S. curling program.

The rest, as they say, is history.

In the past, convincing curlers that analytics could improve their on-ice results proved to be a tough sell. “Putting numbers in front of people who don’t understand them, and don’t see any value in them, can be hard,” he says.

Geurts sees his recent Olympic success as a turning point for curling analytics—and his business. He’s already looking to hire other analysts to keep up with demand.

“There are huge growth opportunities,” he says. “The numbers are still very rudimentary. There is so much more to be learned about our sport.”