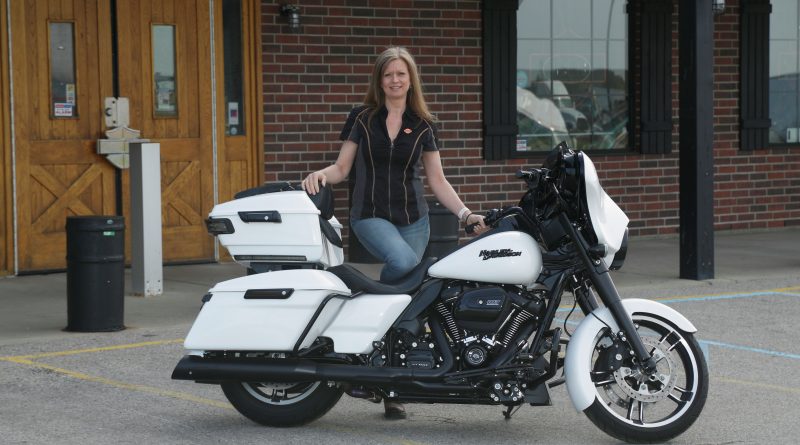 I’VE BEEN RIDING since 1993. I did give it up for several years while I was raising my kids, but then started riding again full-time in 2008. This is my third Harley-Davidson. Of course, when you work at a Harley-Davidson dealership, you’re sort of expected to ride one, but I’ve never owned anything but Harleys.

LAST YEAR, I traded my 2009 Street Glide for this bike. There’s a big difference—the motor and ­suspension are new, and the torque and handling have really been improved. To be honest, there’s been a couple of motor upgrades since 2009, so I noticed a huge difference in performance. It really exceeded my expectations.

I MODIFIED THIS bike completely. I always wanted a white bike ­accessorized with black, so I changed all the chrome and detail parts to black. Anything that I couldn’t get in black from the factory, I powder-coated black. Well, wouldn’t you know, in 2018 Harley-Davidson started blacking them out directly from the factory. I may have lost some of my originality, but I like to think I was ahead of the design curve.

I TRY TO always do one long road trip every year, but the majority of my riding is my commute to work. I live outside of the city, about 15 kilometres away, but I usually don’t take the direct route home. I might go west, sometimes south, I take different routes all the time.

IT’S AN AWESOME way to end the workday. A lot of people can’t ride to work, for various reasons, so I think I’m really fortunate to be able to. It’s amazing how even a short ride can change your view of everything. Sunshine and fresh air after a stressful day, there’s nothing like it.