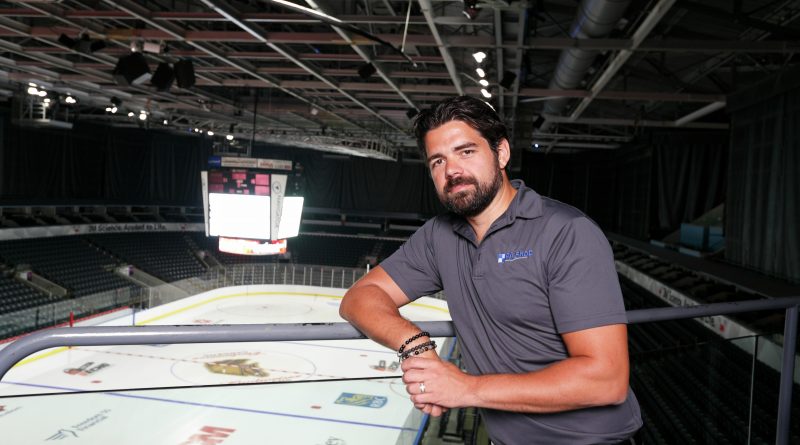 Working around a packed schedule, the PA Shop caps off a notable
install at Budweiser Gardens

BUDWEISER GARDENS IS London’s premier ­entertainment venue, but with some 16 years of concerts, hockey games and special events behind it, the facility’s sound system needed an upgrade.

That work wrapped up in July, when London-based audio, lighting and video production firm, the PA Shop, was brought in to give the Bud a much-needed boost.

As a city-owned facility, it was required that the system upgrade be tendered out, and according to PA Shop  president, Ryan Schroeyens, being awarded the contract on the $250,000 project was a significant achievement for the company.

“All of us are Londoners. It was exciting for us, as a team, to be able to do the largest venue, the largest single-room venue in the city,” Schroeyens says.

“We’re just doing what we do every day, but the fact this will impact so many people here in our hometown is an
amazing thing” —Ryan Schroeyens

“It gave us a sense of pride to be able to say we did the Budweiser Gardens. There were some interesting things that happened, but overall it was a great experience for us.”

A major challenge for the PA Shop team—which included Schroeyens, lead installer Steve Deline, computer system engineer Darren Morrison and audio engineer Aaron Murray—was the availability of the building. After all, the Bud is a busy venue, and work could only take place when there was nothing underway on the floor.

Schroeyens estimates it would have taken the team about five weeks total to do the job—if that timeline actually ran consecutively. In reality, the work started in February and only finished around the end of July.

And the real challenge was actually much more daunting than simply finding time between hockey and basketball games, concerts, theatre shows and WWE, Cirque du Soleil and Disney extravaganzas. “It’s time consuming because everything is at 65 feet and off a boom lift,” Schroeyens explains. “It takes time—up, down, up, down—and you have max weight capacity in the boom lift, too. You may want to take two speakers up because they’re close together, but you can’t because of the weight capacity. So, it was a big job. We’ve done big jobs, jobs similar in size, but not on this sheer scale of size of venue.”

Budweiser Gardens general manager, Brian Ohl, described the project as “a major job”, and though he and his team have worked with PA Shop staff on various events over the years, the sound system upgrade was unlike any project in the past.

“This was a major investment for us, and the professionalism [the PA Shop] showed, the flexibility, it isn’t easy to do this work,” Ohl says. “There were some peculiarities putting in a sound system in a building like this, and I couldn’t be more pleased with what they did and the results we have.”

While the new system won’t be used for many of the major concerts and travelling shows that typically bring in their own sound equipment, Ohl says the big beneficiary of the changes will be the Bud’s in-house system.

Over the last couple of years, the feeling around the ­facility was the sound quality wasn’t up to the standard of the rest of the building, particularly when it came to announcements during Knights and Lightning games.

Ohl describes the improvements as being “more subtle,” and something people will be happy with, “even if they don’t know why.”

For his part, Schroeyens says he and the PA Shop team will always remember their role in that new fan experience.
“It’s a pretty powerful feeling, but at the same time ­humbling,” he says. “We’re just doing what we do every day, but the fact this will impact so many people here in our hometown is an amazing thing.”