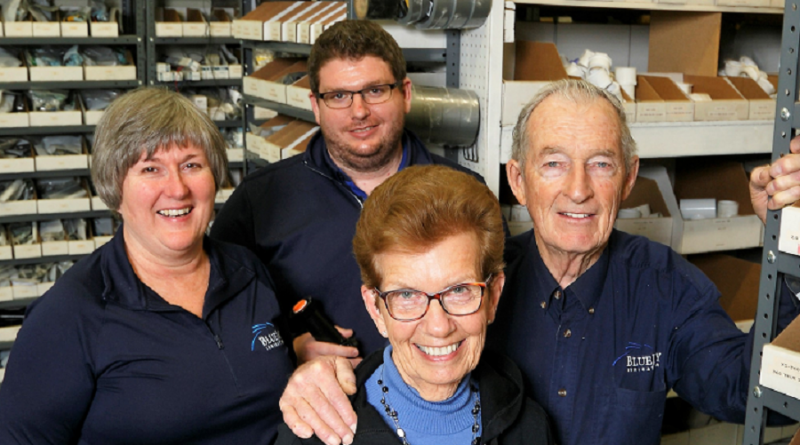 Photo, from left: Betsy Lively with son, Trevor, and his grandparents, Linda and Don Lively

WHEN HIS DAD died, Trevor Lively lost his best friend—and his business partner.

Lively took his first job when he was eight years old, working for his father, Bruce Lively, at his company, Blue Jay Irrigation. “I was just feeding wire into the machine—a very simple job,” he says, proudly. “But I was working.”

For Lively, being the son of a consummate entrepreneur—a guy who started installing irrigation systems
in the mid-1980s after he thought to himself, “That’s a neat idea!”—meant that personal time and work time often overlapped.

“When I was 12 years old, randomly he got two nine-hole, mom-and-pop golf courses,” recalls Lively. “I annoyed him enough that he actually took me to work. It ended up just being him and me for an entire summer. We installed these golf courses, just the two of us.”

Even though other kids his age were at summer camp or enjoying time off school, Lively fondly refers to that ­summer as the best of his childhood.

There was no question, says Lively, that the business would carry on after the death of its patriarch, and part of making that happen is not rushing, as some might, to fill the void created

Blue Jay Irrigation rode the boom of golf course ­construction to grow into one of the foremost installers of irrigation system in the region. The company also steered through golf’s painful industry shakeout of the late-2000s by switching a significant portion of its focus to residential and commercial installations, as well as service and maintenance.

Bruce Lively passed away last November, leaving his son in charge of the business. Lively had become a full partner in the business—his father brought him on as a partner when the company opened a branch in the Niagara region—and the two had planned for an eventual  ownership ­succession. However, the transition came earlier than expected.

“It’s given me a completely different perspective,” says Lively. “I don’t have my safety net of my dad anymore, it’s just me. Some people say it’s lonely at the top, and I’ve never felt that before until my dad passed.”

It’s not just a loss for Trevor. His father was at the centre of a business that, as it grew, took in nearly the entire Lively family. Trevor’s grandmother is still the company’s bookkeeper; his grandfather still works in the service department; his mother is the sales and install administrator. There was no question, says Lively, that the business would carry on after the death of its patriarch, and part of making that happen is not rushing, as some might, to fill the void created.

“A lot of people said to me when my dad passed, ‘You’ve got some big shoes to fill,’” says Lively. But from his viewpoint, it isn’t about filling anyone’s shoes but his own. “No one’s replacing any shoes. We’re filling our own shoes.”

To that end, Lively is now focusing his energy on ­running the business in such a way that his father’s legacy remains at the heart of everything they do. It is a way to process loss while continuing to do the things you need to do as a business owner. “Unfortunately, life’s not going to wait around for you to get over this, and honestly, I don’t think you’re ever going to fully get over this,” says Lively.

“My dad and I chose to be partners, we chose to be best friends and we chose to have a work relationship. We never knew this was going to be where we ended up.”