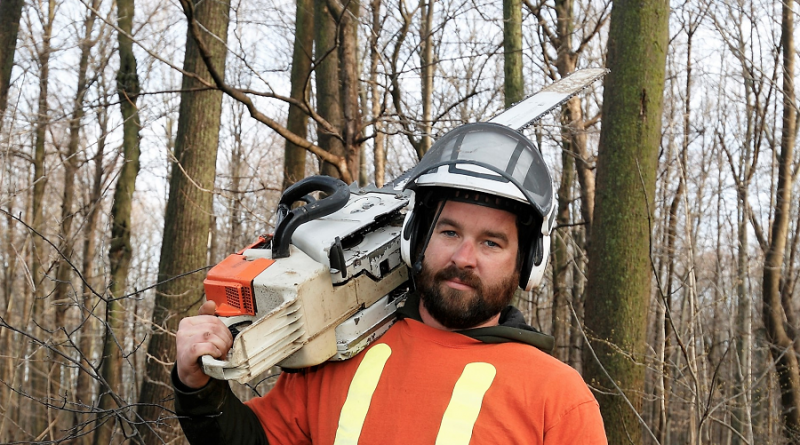 Calvin McCallum, owner of CLC Tree Services, chats about the perks and challenges of his career

CALVIN MCCALLUM IS a certified arborist and owns CLC Tree Services. After starting the ­business in 1988, his father, Curtis, retired this spring. His mother, Anna Marie, is also retired from the business.

McCallum is 34 and graduated from the arborist program at Sir Sandford Fleming College in 2005. That was a surprise to no one—he began going to jobsites with his dad when he was five. He and wife, Erin, had their first child, Levi, last July. “I can only hope he finds a love for trees and nature,” the new dad says.

When not working, he plays dodgeball and ­softball. The company employs seven and has a sister company, Christmas Décor London, that installs lights and decorations seasonally.

We all look forward to spring, but for you it ­signals the start of your busy season. How do you get ready for spring and summer?

It requires a lot of training on new equipment and ­maintenance of existing equipment to ensure safety. Over the last five years, we’ve been blessed with enough work to keep us busy pretty much year-round. So, it’s not like starting fresh every spring.

You started helping your dad when you were five. Was there something that sparked your passion for trees?

I have been climbing trees since I could reach the first branch. I’ve always loved them and been fascinated by them. I had a lot of jobs as a teen. When I was 18, I moved to Toronto and took a sales job. I was living with several other sales ­associates, and there was a house fire that changed all our lives. I decided then I wanted to follow the family dream. I enrolled at Sir Sandford Fleming because my dad wanted me to learn the right way, rather than being self-taught as he was.

Do you have a favourite type of tree or ­specific tree somewhere?

I’ve got two, for different reasons. I really like the dawn redwood. It’s native to China, grows quickly and has some nice characteristics. I planted a bunch of them at my house. The other one I like is the Manitoba maple, which is known as Acer negundo. People called it Acer no-good-o because they require constant ­maintenance and fail quite often. So, it’s a bit of a joke that it’s good for business.

What’s the biggest mistake people make tending for their trees?

Not watering your trees, whether they’re big or small, really affects them. People water them in the beginning, but once they get bigger, they often leave them alone. When a tree falls over and lands on a house, some insurance companies now are asking for proof the tree was maintained properly. Take advantage of free quotes from tree companies to get information about maintaining your trees.

Are your customers ­primarily homeowners? Do you work in conservation areas and other green spaces?

It’s about 60 per cent residential and 40 per cent commercial. But commercial includes condominium corporations and high-rises. We often consult with developers as they plan neighbourhoods. We cover, roughly, Port Stanley to Grand Bend, although we have ­travelled farther for larger jobs.

I’m in the yard by 5:45 a.m. or 6 a.m. at the latest. It takes about two hours to manage materials and maintain equipment. Then I’m out on jobs all day, back at the yard by 6 p.m. Another hour doing paperwork and I head home around 7 p.m.

I was recently elected as a VP of the Ontario Commercial Arborists Association. One of our goals is to educate people about what arborists do. There’s a perception that we’re a guy with a pickup truck and a chainsaw. But it’s much more than that. It’s dangerous work, being up on ropes at the top of a large tree. We look after forests and individual trees, and it takes more skill than people realize. I’m not complaining, don’t get me wrong. But I think the worst part of the job is that people often don’t understand why we charge more than $50 until they see the equipment we use and what’s involved with maintaining and removing trees safely.