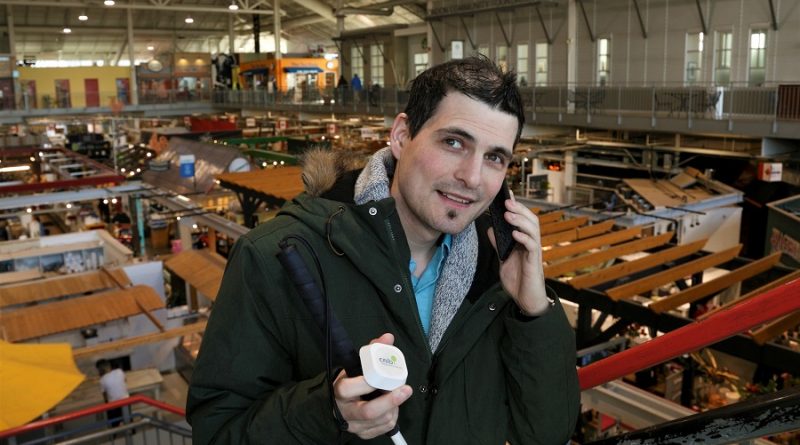 IF YOU LIVE or work the downtown core, chances are good you have taken an elevator recently. Chances are equally good that you didn’t give much thought to the experience — after all, elevator riding has become somewhat banal. They are the kind of accessibility device that is so commonplace as to be unnoticed.

That’s the future that Ryan Hooey hopes is in store for ShopTalk, a network of electronic beacons that is helping visually impaired people navigate indoor commercial spaces in a growing number of locations in downtown London.

“The beacons take over where the GPS leaves off,” explains Hooey, a program lead with the Canadian National Institute for the Blind. There are plenty of mapping aids that let the visually impaired navigate the outdoor environment, but very few options once they step inside a space. “It sends messages from the beacon to my phone to let me know what the inside of the space looks like.”

Say a blind person walks into a Tim Hortons. Maybe they think they have an idea of what the inside of the space looks like. But since Tims is constantly redesigning its coffee shops, maybe the layout is new and completely unfamiliar to someone who can’t quickly scan the space with their eyes. With a beacon installed, a person gets a quick verbal explanation of the layout sent directly to their phone (“seating at eleven o’clock; washrooms at two o’clock; lineup at twelve o’clock,” a person might hear), which gives them a starting point to find their way around the space.

When accessibility becomes a form of customer service, suddenly accessibility advocates and small business owners are speaking the same language

And if (or when) the Tim Hortons gets another redesign, it’s little more than a few keystrokes for Hooey and Larissa Proctor, who programs the beacon network, to make the update.

The beacons are a safety measure as well, Hooey says. Emergency exits are almost always signified visually; the beacons tell a person where they’re located. “With the beacon, at least I have a fighting chance,” he says.

The beacons have started to be installed in businesses throughout downtown London — about 15 as of mid-February, with more going in all the time. The CNIB, supported by a grant from the London-based Westminster College Foundation, will eventually install 100 of these beacons throughout the downtown core by mid-year. “We wouldn’t be able to do this without them,” Hooey says of the foundation.

If you haven’t noticed anything different in downtown spaces, that’s sort of the point. The beacons themselves are about the size of a small wifi router and designed to be unnoticed. If you notice anything at all, says Hooey, it might just be more red and white canes and service dogs in your favourite coffee shop. 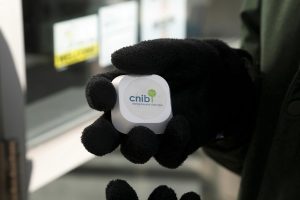 According to Hooey, the program also opens up a dialogue with business owners about accessibility and reminds them that barriers faced by the blind that aren’t always immediately obvious.

“We want to remind people that the AODA [Accessibility for Ontarians with Disabilities Act] is the bare minimum,” he says. “[It is] the line between being kind of accessible and… meh.”

To support the program beyond the 100 beacons for which the CNIB has funding, the hope is either to find more grant funding, or more ambitiously, that business owners pick up where the Westminster College Foundation leaves off. Hooey believes if improved accessibility enables more people to enter a business, it translates to more sales. And that means installing the beacons isn’t just helpful to the greater community — it’s a good investment, too.