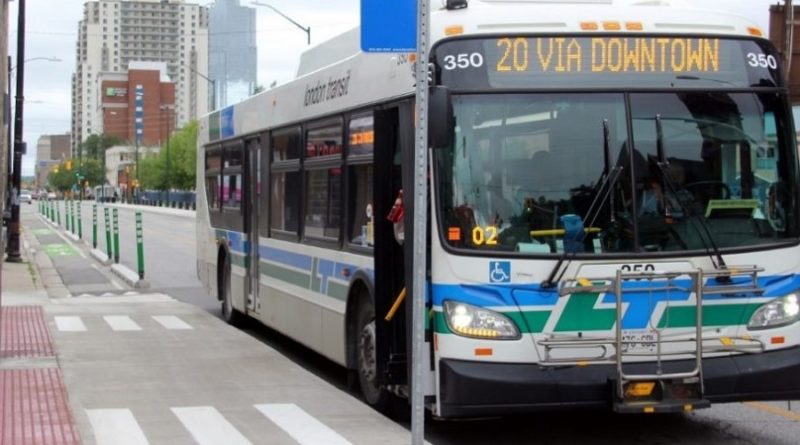 With on-demand service for the industrial southeast and zero-emission buses on the horizon, the LTC prepares for its new normal

THE PANDEMIC HAS taken a hefty toll on transit commissions the world over — from a sharp drop in ridership as the economy transitioned to work-from-home models to the more recent service disruptions caused by Omicron — and that’s no different here in London.

But new staff reports set to go before the London Transit Commission this week paint, at least, an optimistic picture for the year to come — a year where the service hopes to make big steps in service and sustainability, while it prepares to return to full service levels at some point in the future.

For workers in London’s growing manufacturing industries, the marquee measure will be the push to launch an “on-demand” service to Innovation Park.

What will that look like? It’s still hard to say, exactly. In the fall, the city approved a staff report exploring a variety of options for this. At the time, staff were leaning towards an option that would see privately contracted transportation companies serving Innovation Park through an origin-to-hub model — essentially a service that would use on-demand rides to connect riders from Innovation Park to either White Oaks or Argyle Mall using smaller 12-seat buses, both of which are existing transit hubs with plenty of routes.

Other options, including subsidizing the cost of riders’ Uber rides (as was tried in Innisfil, Ontario) or operating an on-demand service entirely in-house, were set aside as too expensive or difficult to integrate.

Per the report going before the LTC this week, the commission is continuing to move forward with this plan.

“In 2022, this initiative will see the award of a contract for the on-demand service that will serve the Innovation Park industrial area,” the report reads, “the determination of the service provider for the area, and the launch of service to the area.”

(The commission isn’t going with the ‘flex route’ option, a more unusual model that’s being tried in Hamilton. There, the flex route has had 80 ‘virtual stops’ added to it, and riders can book their stops — essentially changing the route in real time to suit their destination.)

The plan hopes to help close something that the LTC has identified as a gap in its service in industrial areas, which was itself having knock-on effects on hiring, “The impact of transit service in London’s industrial areas on hiring was repeatedly identified as a concern among employers,” a 2018 study found. “Numerous companies commented that poor transit service made it difficult to find and retain employees.”

Even in 2018, this problem was particularly concentrated in Innovation Park, then a new-ish industrial area. At the time, the area was expected to double in three years, but had zero companies whose employees took transit, given its location. It’s expected to double again in the next five years, to around 2,500 employees, city staff say.

The report also looked ahead to its sustainability goals for the year. The transition to electric or other zero-emission buses won’t be initiated this year, but the LTC wants to make steps in that direction with the “establishment of a team that will lead the implementation of zero emission bus technology at London Transit.”

They’d like to start with eight to 10 buses, and have estimated that it will cost around $26 million when all is said and done. Call it a plan to make a plan.

In addition to looking at the year ahead, the report gives some insight into the impact of the pandemic on ridership. Unsurprisingly, ridership is down and has been down throughout the pandemic, but it is hard to say what to make of that. Transit ridership is down everywhere — down around 70 per cent across the country in 2020 and 2021. In London, those numbers generally tracked, and ridership has hovered between 40 to 60 per cent of normal, depending on the level of restrictions in place. 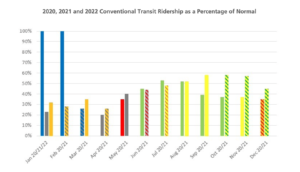 Staffing, too, has been an issue as the LTC looks toward returning to full service.

“Over the period of early December through late January approximately 15 per cent of the workforce had been impacted by Covid, either self-isolating due to a close contact or symptoms, testing positive for Covid or experiencing childcare issues resulting from school/daycare closures,” the report reads. “Fortunately, the lost time was spread over the period and across departments such that significant service disruptions have been avoided thus far.”

One area that doesn’t seem to be struggling, though, is recruitment and hiring, the LTC says. By the end of the month, the LTC says it will have 429 operators trained and available — only five fewer than the 436 that’s considered a “full slate.”

“Should the plan to host three more classes of six operators each in February, Marc  and April hold up,” the report reads, “coupled with the planned retirements that are currently known, the required complement will be reached with the graduation of the April class (early May).”