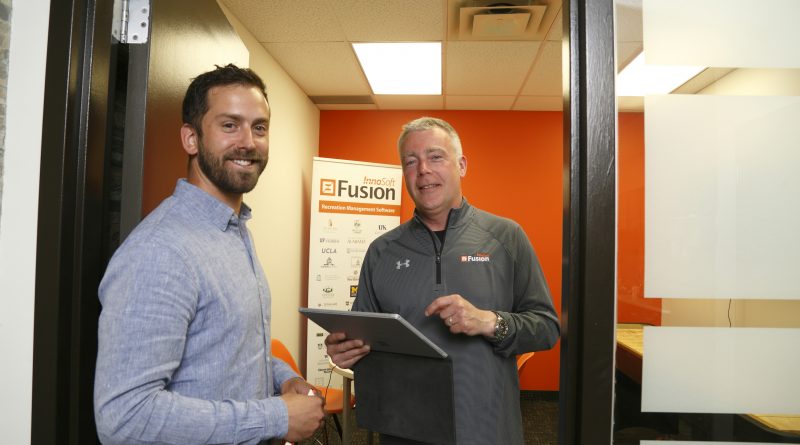 Following a well-conceived and properly executed acquisition,
a software firm maintains its identity and autonomy

THERE ARE MANY ways to measure business success, including the standard sales figures, net income and market share.

The founders of InnoSoft Canada paid attention to all of that of course, but as the company grew from a client base of two in 2009, there was another measure they couldn’t avoid.

“Over the last couple of years, I was getting lots of calls from private equity groups, venture capitalists and merchant banks,” says Brian Foster. “We were the market leader, and that drew a lot of attention.”

If you had the nicest house on your block, and every week someone knocked on the door with a tasty offer to buy your house, eventually you’d have to consider it, right? Foster and his Waterloo-based partner, Jeff Berg, finally did just that.

“We engaged a consultant out of New York to assist us with the next phase,” Foster says. “There was a lot of consolidation happening all around us, and we needed to make some strategic decisions.”

The decision they made took effect in March—they sold InnoSoft to Constellation Software, a Toronto-based company with nearly US$2 billion in revenue, derived from providing hundreds of software solutions to industries around the world.

“Over the last couple of years, I was getting lots of calls from private equity groups, venture capitalists and merchant banks. We were the market leader, and that drew a lot of attention”
— Brian Foster

The first tab under ‘About Us’ on the Constellation website is ‘Being Acquired’. The company looks to acquire market leading companies and let them continue being market leaders.

InnoSoft builds and operates systems that run complex recreation programs for universities and colleges across North America. The count is more than 200 today, including nearby examples such as Western, York, Waterloo, Ryerson and McMaster universities, along with enormous U.S. schools such as Michigan, UCLA, Florida and North Carolina.

The company’s Fusion software runs all aspects of a campus recreation program and can be adapted as needed for any situation.

Recent growth has come working with cities to run their parks and recreation programs. Brandon, Manitoba and Amhertsburg, Ontario were among the first to sign on, and more are joining all the time.

To break into the mobile world, InnoSoft purchased Get Rec’d and renamed its mobile app FusionGO. From that it created FusionIM, which is a mobile app to run and access intermural sports within parks and rec systems.

In short, InnoSoft continues to be the market leader in running recreational programs, whether they are based at schools or cities, have 100 participants or 100,000.

The transition to Constellation “has been exactly what we expected,” Foster says. “They support us and give us resources to grow, but let us do what has made us successful.”

Foster’s immediate contact at Constellation joined the company when it purchased his software company. Foster has begun travelling to meet with software startups and successes to introduce Constellation and see if a partnership of some kind is feasible.

Meanwhile, InnoSoft is thriving with more than 40 employees, roughly half of whom are in London.

“I always like to mention our team because they are the backbone of our success,” Foster says.