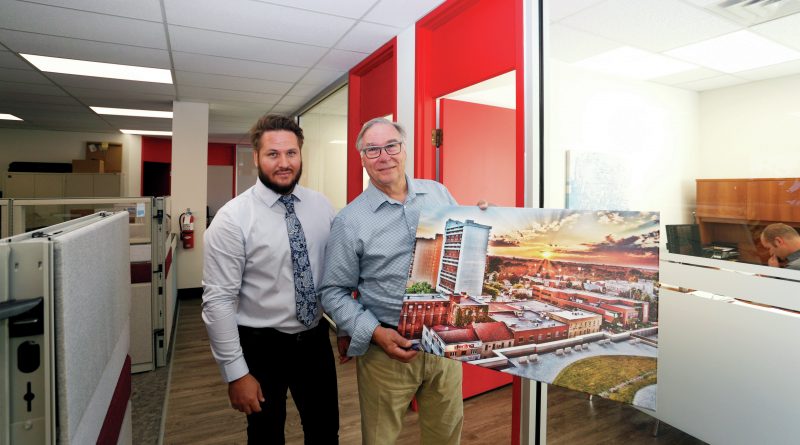 WHEN DAVE SCHRAM’S grandfather, Warren, opened Sterling Marking Products in 1945, it was a one-man shop that produced custom rubber stamps. He hung out his shingle on Ridout near King Street, and as his sales and staff increased he grew his space by purchasing adjacent buildings as they became available, punching holes through walls to connect them.

For more than 70 years, the company operated in London’s core, ­eventually taking over eight buildings and employing close to 100 staff. In the early 1970s, Warren’s son, Bob, took over Sterling, and it has remained a ­family-owned business to this day.

Earlier this year, the company moved operations to Hyde Park after ­purchasing the former Postmedia/Sun Media building on Gainsborough Road. (Sterling’s former building parcel was purchased by Info-Tech Research Group in 2015, and is currently undergoing a massive ­transformation that will connect the buildings and turn it into a new 70,000-square-foot headquarters, taking up almost an entire city block).

“We always knew that at some point we would outgrow our manufacturing facility downtown, but we never expected to end up here” —Dave Schram

“We did the whole move without missing a day of shipping,” says Bob’s son Dave Schram—an impressive accomplishment when you consider the ­company ships an average of 2,500 orders a day.

“We always knew that at some point we would outgrow our manufacturing facility downtown, but we never expected to end up here,” says the younger Schram, who, along with plant manager, Mark Amos, was responsible for stickhandling the renovations and the move to the new location.

When Sterling was downtown, the scope of its operations was not highly visible. Most people did not realize that the storefront on Ridout Street was just a small part of the whole complex of buildings, says Schram. The new signage at the Gainsborough Road location is purposefully large. “We are making a very visual statement—this is a large international business and we do a lot more than stamps, even though that is still one of our largest departments along with legal kits, print and bindery and signage.

“We have customers all over the world, and there has been a temptation to move to Toronto or to move out of the city to a smaller community where properties would be much less expensive, but staying in London is important to us,” says Schram.

“We expected to move closer to the 401, probably in an industrial park close to other manufacturers. In that way this is not ideal location, but we’d looked at a lot of buildings and as soon as we walked into this one it was pretty much unanimous—the bones were great and the three parts to the building work well with reception and customer service in the centre, production and warehousing on one side and administrative offices on the other.”

Sterling was also the benefactor of a number of industrial amenities that fit nicely with its operations. “The delivery docks and trash compactor we inherited work perfectly in place, so we didn’t have to make any major structural changes. We did take down some non-weight bearing walls to open up the space, redid the electricals and added some skylights in key areas, otherwise we just needed to give it a facelift.”

The end result was a $2-million makeover of the 40,000-foot space, from new roofing overhead to new flooring underfoot, with a focus on physical workflow, aesthetics and energy efficiency. Practical upgrades included new LED light fixtures throughout the building, a new HVAC system and window film that reduces heating and cooling costs.

According to Schram, workflow improved immediately in the plant area, simply by dint of having no stairs or narrow doorways to contend with. In their previous location, says Schram, “There were doorways that were too narrow for pallets to go through, so we would have to manually transfer boxes from a pallet on one side of the doorway to a pallet on the other side.”

The new location also has 18-foot-high ceilings, allowing a more compact and efficient footprint for warehousing.

One of the aspects Schram enjoyed most about the move was tackling the design and décor decisions. Dark brick walls were painted white, and pops of colour were introduced in common areas like the kitchenette. All of the bathrooms were remodeled and updated with tiled walls and ­stylish features. The kitchen has granite countertops and the break room features live-edge wood tables. “Our employees spend a lot of time at work, and we wanted this to be a nice space to work in,” he says.

And in addition to a nice space to work in, the property also provides a plenty of greenery and nature that workers can enjoy just by stepping ­outside on the west side of the building, which borders the Hyde Park Rotary Trail. There, a new cement walkway leads to a patio, which Schram describes as “a nice little oasis for ­people to enjoy.” Surrounded by trees and brush, some employees have put up feeders to attract birds. Large windows look out to the green space from a ­variety of vantage points, so visitors to the boardroom and workers can enjoy the ever-changing view as they go about their day.