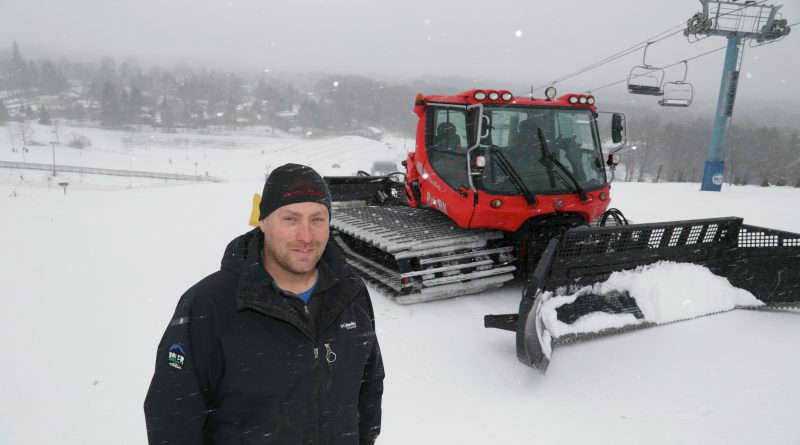 MY FIRST TIME driving a groomer was a lot of years ago now. I was a lift operator at the time. I’ve always like cars and machines, and I would come around at night on my own time just to be able to ride along with the operator. I bugged and bugged him to let me give it a try, and one night he finally let me drive it. It was a disaster at first.

THE CHALLENGE IS learning to blade. The whole idea is the blade does the smoothing out and the tiller is the part that puts down the corduroy on the snow. If the blading work isn’t done well, the end result really suffers.

IT TAKES HOURS and hours of practice. It’s a 12-function blade—up and down, tilt angle, side throw, left and right wings—and everything has a separate button for the joystick. It’s a big learning curve.

THIS MACHINE IS our workhorse; it is out every night during the season. I’ll do a lot of the side stuff during the day, but for our night guy, it’s about an eight-hour job to do the whole hill, longer if the temperature is up. We have an older machine we’ll bring out if he needs some support. It’s all about being open at 9 a.m. the next morning. 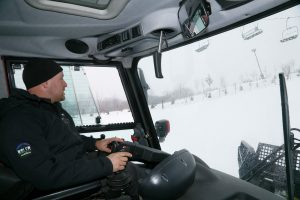 THEY’RE NOT CHEAP—just shy of $400,000 new. Because it’s red, we often joke that it’s the only Ferrari we’ll ever drive.

WITH PROPER MAINTENANCE, they’ll last a long time. This machine has just over 5,000 hours and is due for replacement after this year. There’s a trade-in market for them—alpine machines will end up going to places like cross-country ski operations where they put on less hours and it’s not up-and-down work.

THERE ARE HUNDREDS of hydraulic hoses on this machine, so we keep lots of spare parts around. The closest dealer is in Elmvale, up by Wasaga Beach. If something breaks and we don’t have a replacement part, there are some 24-hour construction machine shops around that we can turn to. Otherwise, you depend on the backup machine.

ONCE YOU’VE MASTERED control of it, it’s pretty amazing what you can do and what you can build. It’s a ton of fun to build snow features for the terrain park, and pushing hundreds of pounds of snow up a 50-degree hill is pretty cool. It’s like a big Tonka toy you get to play around in. It really is quite the beast of a machine.