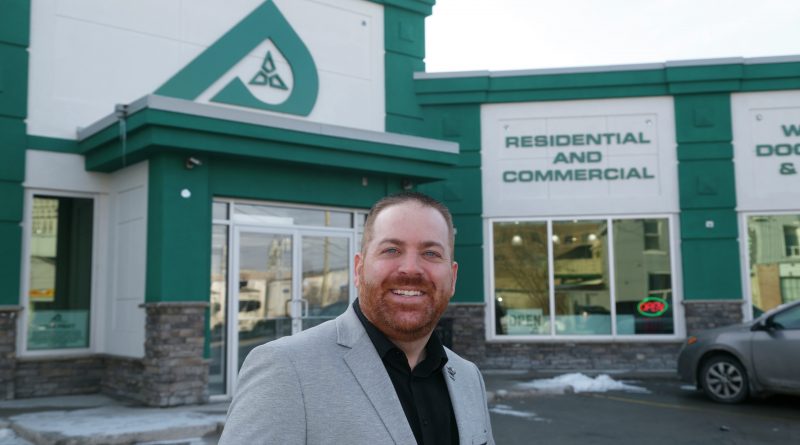 UNTIL YOU DIG into the details of the story, it’s easy to assume Brett Lucier is being falsely modest. Discussing his journey from rookie installer to eventual owner of Provincial Glass & Mirror, he stresses his early ineptitude.

“They sent me out in the field and I broke 50 per cent of the glass,” he says, smiling. “I would go out with someone more experienced and I’d be struggling. One day, we were working on different sides of a building. It took me a long time to install four windows, and the senior installer came around the corner to check on me. He had already finished his 12.”

If the friendly face at the Tim Hortons drive-thru gave you the wrong change, substituted tea for your double-double and then spilled it into your lap through the window, you’d bet against him or her buying the franchise one day.

So, it’s natural to assume Lucier, 39, is exaggerating his bumbling performance for comic effect. But all the evidence says otherwise.

“He broke more glass than I can remember,” says Gaston Drapeau, the man who hired Lucier 17 years ago. He applied for the job while working at Building Box, where he was doing kitchen estimates, but—happily—not laying hands on expensive granite countertops or glass cabinet doors. “Brett started as a helper, and I quickly realized he was never going to be an installer.”

Lucier, who had studied architectural technology at Fanshawe College, remembers Drapeau telling him it would be better for everyone if he gave up installation and worked in the office.

“He had a background in architectural design, so I had him start estimating. From there, he moved to larger positions and eventually into a manager,” Drapeau recalls.

“Moving has changed our DNA a little bit. We’ve got better systems and communication. That alone makes us more efficient” —Brett Lucier

There’s no way of knowing, but it’s possible he would have continued with installations and never learned the office side of the business if he hadn’t been so incompetent in the field.

As it was, he moved up the ladder quickly and became Drapeau’s partner, setting the stage for Drapeau to retire in January of this year. Lucier (together with the bank, he hastens to add) is now the sole owner.

With a new ownership structure comes a new home. Provincial opened its new building two months ago, doubling its space and laying the groundwork for significant growth over the next five years and beyond.

Like Lucier’s early experiences, the move to its new Horton Street location was filled with stumbles. After eight months of delays, the company celebrated its new digs late last month with an open house.

The new place covers about 12,000 square feet. At 7,500 square feet, the back shop alone is larger than the company’s former home on York Street, next to Hanford Tire. Tricar Group has started construction of a 24-storey residential tower on the site, across from Copps Buildall, which bought the property from Provincial and sold it to Tricar.

For much of last year, Provincial operated from temporary structures and storage units, with installation crews connected electronically. “Things just snowballed. We had to be out of the old place by August 31, and we didn’t get in here until February 1,” Lucier says. But like a homeowner who comes out the other end of a lengthy and hellish renovation, only to fall in love with his new kitchen, Lucier says it was all worth it.

“It’s not just larger, but it’s much better organized. We were scattered all over the old place, on top of each other,” he says. “Now we have our office staff organized better, with estimators all working in one area, project managers in another area and so on.”

He was determined to stay downtown, not only for the oft-repeated mantra of supporting the heart of the city, but for a more practical reason: much of Provincial’s business takes place downtown.

Roughly a third of its revenue comes from service calls, which means replacing broken glass in bars, restaurants and buildings under the aegis of property management companies. Tempting fate, and only half-joking, Lucier says, “You have to fix broken glass. That part of the business is almost recession proof.”

Provincial differentiates itself in the repair world by offering 24/7 service, with a small fleet of trucks ready to go when needed. “We get calls from restaurant owners or the police and we respond right away.”

The rest of Provincial’s portfolio breaks down about equally between commercial and residential building. It bids on new commercial builds. It focuses on residential renovations and retrofits, staying away from large-scale new home developments.

“Our biggest project was a student services building at Western. That was $1.4 million. I’m also partial to the work we did on the new student services building at Fanshawe,” Lucier says. “But to do a $1-million job, you need $1 million in the bank. Our bread-and-butter is projects under $500,000—strip malls and plazas. We’re doing a lot of work in Komoka right now.”

Which isn’t to say it doesn’t land big corporate contracts. Provincial supplies mirrors for GoodLife Fitness at many of its locations, for example.

About half its orders require manufacturing and fitting of frames and structures. Those include mirrors, windows, doors and entire storefront entrances. The larger shop will make it easier to fill custom orders. It will also allow Lucier to invest in technology to create more complex custom designs in the coming years.

Most of Provincial’s glass, whether in large sheets or in ready-made applications, comes from the U.S., which has Lucier watching the NAFTA talks and Trumpian tariff threats closely. Regulations aside, one of the biggest challenges recently has been an ongoing glass shortage that hasn’t been reported much outside construction circles. The Great Recession closed about a dozen glass manufacturers in the U.S. They were not replaced as the global economy heated back up.

“Prices have gone up 30 to 40 per cent in recent years,” Lucier reports. “Demand is way ahead of supply.”

Chalk up another advantage of the new shop—more room to stockpile supplies, creating a buffer of sorts to handle any supply worries. There’s no point having a 24/7 repair service if you don’t have the glass on hand to install.

At any given time, company’s designers and estimators are working on 25 projects with overlapping deadlines, which translates into anywhere from 300 to 500 jobs of all sizes per year on the commercial side. Provincial works with architects and contractors on design-and-build or tendered projects from Chatham to Kitchener-Waterloo. It’s enough to keep 16 installers busy, doing four to 10 projects per day.

Finding talented installers, as Lucier himself remembers all too well, is an ongoing challenge. “One of the deciding factors for me to own the company was the people here. I learned from Gaston the importance of creating a place where people enjoy coming to work. Loyalty is important, going both ways.”

“People who come already trained, with experience, often cause the biggest problems. They’ve been trained a certain way and are tough to change. I’m a big believer in promoting from within”
—Brett Lucier

To help build loyalty, Lucier provides full benefits and encourages workers to take care of themselves with massage, chiropractic and other treatments. He also instituted a retirement savings plan that matches employee savings with company contributions.

It makes good business sense to retain experienced installers in particular. Finding new people is difficult, and “the ones who come already trained, with experience, often cause the biggest problems,” Lucier says. “They’ve been trained a certain way and are tough to change. I’m a big believer in promoting from within, having people learn by watching, using the proper safety equipment and so on.”

Given his early experiences in the business, it’s not surprising he values in-house training and promotion.

By investing in his people, along with new technology in a new building, he believes he can grow by 25 per cent over the next five years. “Moving has changed our DNA a little bit. We’ve got better systems and communication. That alone makes us more efficient.”

For his part, Drapeau is quietly encouraging of his one-time junior estimator and erstwhile partner. “I’m excited to see what it can become. The company was small when I purchased it, and we were learning while we grew. I’m happy Brett has the opportunity to continue with it.”

Although the two men are not related, the transition has the vibe of a family succession, one generation continuing the work of the preceding generation. Everything on Horton Street is new—the building, the equipment and the day-to-day processes. But it’s rooted in the relationships built in and around the city for more than three decades.

As if to remind everyone of those roots, the company brought a token of sorts when it moved. Among the inventory transferred was a large glass sink that had been kicking around the York Street office since long before Lucier arrived. (He was never asked to install it, so it remains intact today.)

“We can’t sell it. It’s a custom design, I guess you could say. We’ve tried to unload it, but have never been able to,” Lucier says, laughing, happy perhaps for a link to the company’s past, even while he looks ahead, confidently, to its future.