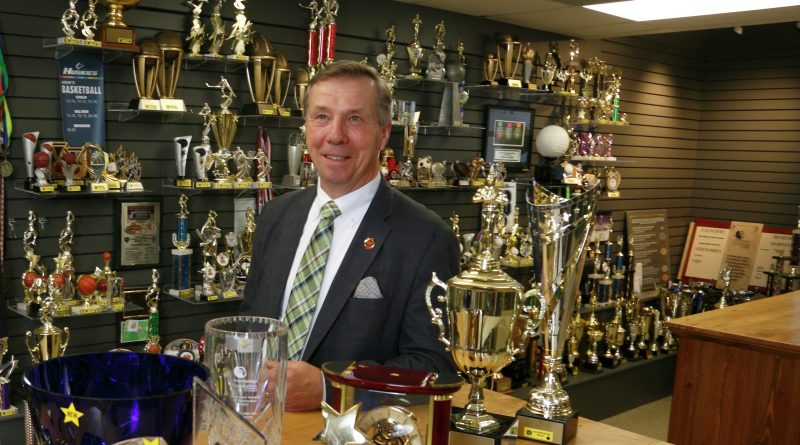 Celebrating a milestone of its own, Nothers Signs & Recognition
marks 50 years from a new location

ALTHOUGH THE DOORS to Nothers Signs & Recognition may have first opened on Wellington Street, for most of the company’s now 50-year history, it’s been a fixture of London’s SoHo community.

While the company is marking its half-century ­anniversary in 2018, it’s now doing so from its new east end location. Last month, the company moved out of its long-time home on Horton Street—in a building company owner and president Jim Nother actually grew up in—and into a new home in the former Doyle Printing plant at 105 Falcon Street.

The new building is “more efficient,” Nother says, featuring a single floor instead of three, a better layout for office and production spaces and three loading docks.

“It was emotional leaving Horton Street, the neighbours, the spot my father put the stake in. I learned how to be a ­businessperson on Horton Street” —Jim Nother

From a practical, business perspective, the move is ideal, but that doesn’t mean Nother didn’t get a little choked up on moving day.

“It was more emotional because my father started there. It was emotional leaving Horton Street, the neighbours, the spot my father put the stake in. I learned how to be a ­businessperson on Horton Street,” he says.

“But when I pulled up [on Falcon Street] on the Monday and saw the sign out front, it was a pretty proud moment,” Nother continues. “It was our team that pulled this together and allowed us to put our stake on Falcon Street. I’m looking forward to making new connections.”

One day last June, a real estate agent approached Nother saying there was interest in the Horton Street building. That conversation got him thinking, and after talking with his dad, they decided to put together a list of commercial properties and do a little window shopping.

When they came across the Falcon Street building, it wasn’t even a listed property. Nother, however, was friends with the owner and reached out to inquire.

After further discussion with Jim Sr., and “a little ­back-and-forth negotiating,” Nother took possession of the building in mid-December of last year.

Ironically, the offer for the Horton Street building never arrived and it remains for sale or lease. Even so, Nother says the move seems like something that was meant to be.

“I was thinking about it the other day. Why did that real estate agent show up, why was the building listed that month, why was it owned by a friend of mine?” he asks. “I really do think it was a blessing in disguise and something to celebrate.”

With the company’s 50th anniversary very much on his mind, it is understandable Nother is taking the time to look back. Just 13 years old when he tried his first engraving machine, Nother started with the business after graduating from high school at 19. He turns 60 this year.

Nother says the sports trophy side of the industry has changed dramatically in 50 years. For example, when the company started, it was pretty much curling, bowling and school trophies. Today, it’s hockey, soccer, baseball, basketball, volleyball, swimming, colleges and secondary schools.

But the importance of the business side of recognition and awards, he is quick to add, has never changed.

“I’m in the best business in the world because I’m with ­people in the best times of their lives,” Nother says. “They’re being recognized, they’re being honoured, they’re hitting a milestone; maybe it’s a memento being given to them for length of service. Recognition is so many more pieces than just that athlete going up to get that gold medal.”