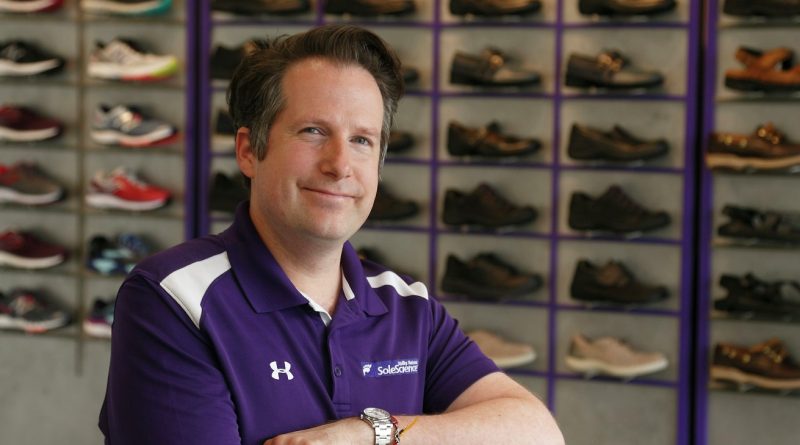 With 18 clinics in 15 cities and towns, SoleScience has built an enviable ­reputation for high-quality foot orthotics. Now, it’s ready to retail

CONSIDER, FOR A moment, how different Cinderella’s fate might have been if that famous slipper didn’t fit just right.

Instead of dancing beautifully with the prince on her magical night, she limps around awkwardly, her toes crunched together. Miserable all evening, she flees at midnight, leaving behind a slipper bloodied by a nagging blister on her heel.

When the king orders every maiden to try on the slipper so the prince can find his true love, she hides from him, unwilling to jam it back on her foot. When at last the prince finds her, the slipper fits no better than OJ’s glove and he moves on to the next town. There he settles for marrying a distant cousin who likes him only for his money and title; their union ends in divorce six years later, throwing the kingdom into turmoil.

Or, consider Dorothy whose only wish is to get home to Kansas. After a harrowing adventure, she learns from the Good Witch of the North that she can return home by clicking the heels of her ruby slippers three times.

Alas, she has thrown them away in the Haunted Forest because they were causing her leg and back pain. Clicking her bare heels does nothing and she never gets home.

Proper footwear is crucial whether you’re a princess, a hyper-imaginative teen or someone just trying to get through the day and rack up your 10,000 steps. And no one knows that better than Colin Dombroski, who had a hip reconstruction at 17 and learned to cope with having one leg shorter than the other.

Inspired by the help he got recovering as a teen, he ditched his business and marketing program at Sir Sandford Fleming College just before graduating and came to Western to study pedorthics, the practice of assessing and treating foot pain with a variety of options, including orthotics. Over many years, he earned a quiver full of degrees, most recently a PhD in health and rehabilitation science.

“The plan was to be a pedorthist,” he says, recounting his path since arriving in London in 2000. What he doesn’t say is the achievement was just the beginning of what he would accomplish, all before his 40th birthday, which, by the way, he will celebrate this summer, in Vegas, with a group of friends.

He’s discussing the past and the future while sitting in the brand-new home of SoleScience, the practice he began in 2002. Until this summer, it was based at the Fowler Kennedy Sport Medicine Clinic. He continues to collaborate with the clinic and also serves as an adjunct professor at Western.

For the last decade and a half, he has expanded the reach of his practice by hiring pedorthists and setting them up in clinics, primarily in Southwestern Ontario. To maintain standards, he has rejected a franchise or licensing arrangement.
“They’re all satellite offices, owned by me. We have 18 clinics in 15 cities and 13 people overall.”

Like country preachers, some of his pedorthists cover more than one clinic in smaller centres like Goderich, Strathroy, Exeter, Wallaceburg, Mount Forest and Ilderton. He established some clinics himself and purchased others. He is approached regularly by practitioners looking to sell their clinics and is rather picky about what he will buy.

“We create a treatment plan that could include many things, not necessarily orthotics. We’re not here to push orthotics. They are important for many people, but not for everyone” —Colin Dombroski

When orthotics are required, SoleScience makes its own. Until the move this summer, manufacturing was in a smallish facility in East London, tucked away on its own. The new place includes a larger manufacturing space (“brighter, more efficient, better air quality.”) In fact, the new place features pretty much everything Dombroski has been dreaming about for the last decade.

It’s located in the handsomely refurbished Ironworks building, a growing hub of health-related businesses on Maitland Street. After years of operating from scattered locations across the city, SoleScience is now under one roof, offering an unparalleled mixture of foot-related services.

The Dombroski philosophy seems to be about doing less. Sure, he prescribes orthotics to many patients, but sometimes they’re not the answer. “Our goal is to come up with a treatment plan and give people an honest answer about whether they even need orthotics,” he says.

The clinic assesses people using a gait analysis and individual testing, which of course is important, but after many years of analyzing people, Dombroski often knows within seconds what the issues are.

“I can’t go to the gym anymore,” he says, only half joking. “See people pounding away on the treadmill…” He covers his eyes and lets the sentence trail off.

After an analysis, the solution might be something as simple as new shoes or a stretching program. “We create a treatment plan that could include many things, not necessarily orthotics. We’re not here to push orthotics. They are important for many people, but not for everyone.”

As such, the new place has a series of treatment rooms and massage tables. There’s also a whiz-bang 3D motion analysis lab that uses motion capture technology to show how a person’s stride is affecting the whole body.

“It’s geared toward runners, but it can help anyone,” Dombroski says. “We’re going to make it available to local athletes and coaches, giving them the analysis to understand how they are performing and how they can improve.”

As evidenced by his ongoing role teaching at Western, he considers education a crucial part of his job, his calling. And so he travels extensively, giving talks about the results of his research—also at Western—and experience.

Two years ago, he published his first book, The Plantar Fasciitis Plan, a comprehensive look at the condition and various treatment options. He plans to write a series of at least three more, each geared to a specific condition. Another will tackle business lessons he’s learned.

As impressive as the lab, manufacturing and treatment areas are, perhaps the most popular part of the new location is the retail space, which features something old and something new.

Retail itself is something new for SoleScience. In the past, Dombroski and his colleagues referred patients to retailers with the specific shoes for their circumstances. Often the referral was to J. Seigel Footwear on Highbury, a specialty shop operated by Jeff Seigel and his wife, Ruth, for the last 20 years. Jeff is the third generation of Seigels to sell shoes in London. When he opened his shop, he focused on medium- to high-priced shoes, designed specifically for foot problems or those who struggled to find the perfect fit.

“We fit people with quality products, what they needed to walk free of pain,” says Seigel. “That was our direction. We shifted to support and comfort without being ugly.”

Seigel quickly became the place to go for medical referrals and all types of hard-to-fit situations. So, early this year when Seigel announced he was retiring, the reaction of many was just short of apoplectic.

“I had a patient who started crying in my office,” Dombroski recalls. That patient represented many more who had come to rely on Seigel for shoes that eliminated chronic foot pain.

Having decided he wanted to get into retail, Dombroski contacted Seigel, shortly after he announced his retirement plans. Following a series of meetings, some over meals at the London Club, they struck a deal: Dombroski bought the Seigel business and name, and branded his retail space Seigels by SoleScience.

“I knew Colin and liked what he had planned for his new location,” Seigel says. “Seeing the Seigel name continue makes me feel good. It was very kind of him to do that.”

The front of the new location is a funky retail space, with a polished concrete floor and a decided lack of shoe racks. “I don’t like them very much,” Dombroski says. “We’re doing things differently but offering a wide selection of shoes, in keeping with the Seigel tradition.”

Another big part of the business is service. Orthotics and other devices need to be serviced and adjusted regularly. To mix fairy tale metaphors, if your princess has a pea in her slipper, she’s won’t be very happy.

“One advantage to making our own orthotics is we can make adjustments right away,” Dombroski says. “Waiting for a week for something to come back and see if it’s right isn’t much fun. The skill of making devices is in the detail. Millimetres, quite literally, can make a huge difference. And no two people react the same way, so while we use the same techniques to create orthotics, we never make them exactly the same way twice.”

SoleScience is very much a family business. Colin’s brother, Scott, has a degree in human resources and is director of operations. His brother-in-law, Adam Froats, is one of the company’s pedorthists. And his parents, Joe and Bette Ann, moved from Barrie to join in. He learned to make orthotics; she helps with administration.

Colin’s wife, Cynthia Bendle, helps out unofficially but is busy with her own business, One-12 Photography.

As he celebrates his birthday in a few weeks, Dombroski might also raise a glass to his new business home. It represents years of momentum and sets him up for the next phase of growth, great news for anyone trying to eliminate foot pain—princesses included.

To read more about Colin Dombroski and the growth of SoleScience, visit Christopher Clark’s blog at www.christopherclarkwriter.com/blog