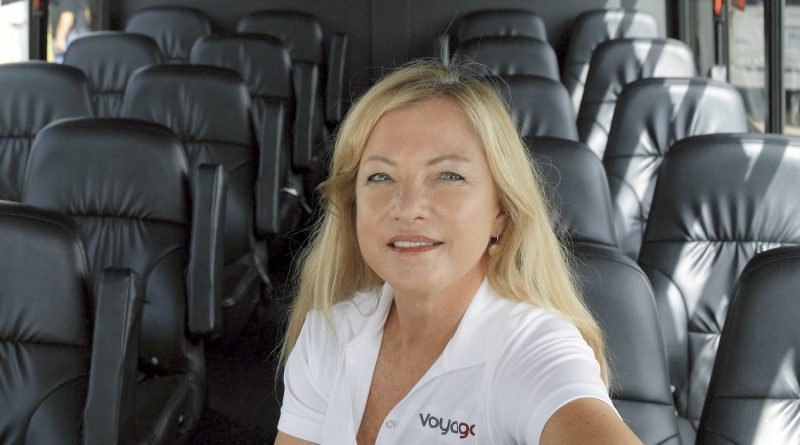 With a new brand and new ­operating model, Voyago is ready to adapt
to whatever its customers demand

YOU’VE GOT TO hand it to Star Trek creator Gene Roddenberry: The idea of teleporting people and objects was not only a great bit of science fiction, it was also a handy plot device. No need to spend time getting places; instead, Kirk, Spock and the rest of the gang could beam wherever they needed to go and get on with their adventures.

Of course, there was often a snag with the technology, some interference or other snafu, that built the drama as the crew waited for Scotty to beam them up to safety.

Two years ago, a group of University of Calgary physics professors “teleported” the properties of a light particle more than six kilometres across the city. It wasn’t anything like the Star Trek version, but the experiment is part of a growing field of knowledge suggesting someday—in several thousand years, perhaps—our descendants may be able to get where they’re going instantly, no matter the distances involved.

In the meantime, we continue to devote an enormous amount of our time and energy to simply moving people from one place to another. It’s not just planes, trains and automobiles. It’s public transit, bicycle lanes, scooters, ambulances, elevators and BRT.

Four decades ago, Voyageur Transportation Services began offering some rudimentary transportation provisions in London. One of its first niches was delivering lost luggage to air passengers’ homes when it arrived late. It expanded to include school busing, patient transfers, some public transit and Checker Limousine. But even as it grew to employ nearly 1,600 people in 21 locations across the province, the very concept of transportation was shifting dramatically beneath its feet, or wheels more properly.

“You want to eliminate empty miles whenever you can. Whether it’s buses or cars or patient transfer, you don’t want the car driving around empty” —Theresa Matthews

Call it the Uber-fication of transportation—on-demand service with complete transparency. No more calling days ahead to book a para-transit ride or trying to flag down a taxi cab. Instead, we are being conditioned to expect nearly instant service, with an app telling us precisely when our ride will be there.

About two years ago, aware of the shift and understanding it was just beginning, the company launched a top-to-bottom examination of its structure and approach. The first hint of change was six years ago when it sold its trucking division.

“We decided to focus on moving people, not packages,” says Theresa Matthews, who joined the company in 1989 and has been president for the last five years. “Once we focused on moving people, we wanted to create a new structure for everything we were doing.”

Voyageur was many different things to different ­people, depending on which services they used. For some, the ­connection was the 500 school buses it operates, delivering 25,000 kids in school districts from Southwestern Ontario to Ottawa. For others, the connection was the patient transfer service it operates in conjunction with more than 80 ­hospitals across the province, including all London facilities. For others, the connection might have been Checker, a comparatively small division of the company but something of a lab for introducing new technology in recent years.

“We wanted to bring all of that under one umbrella and prepare to expand into new markets in Ontario and across Canada,” says Matthews. “That’s what we started talking about two years ago.”

The result is a new name and a new way of operating. “Voyago is a rebirth of our company,” says second-generation owner Perry Ferguson. He has stepped back from much of the daily operations, but continues as CEO. His brother, Dwayne, retired a few years ago.

The rebirth creates a single organization that will use technology to deliver transportation solutions in whatever form they’re required. For now, that means “the same ­offerings,” Matthews says. The company is fully committed to its school bus and medical transfer service and is looking to expand them whenever possible.

The difference is behind the scenes, both in the manner Voyago delivers those services and in the relationships it has with its 1,600 employees.

Roughly half the 500 people who provide patient transfer services are sub-contracted and use their own vehicles. It’s the Uber model applied to a different field.

“They are trained in advanced first aid, but follow 911 ­protocol if there is an emergency,” says Voyago chief operating officer, Corey Jarvis. “They operate two-per-vehicle and exceed Stretcher Transportation Services (STS) guidelines.” In all, there are 150 vehicles providing the service.

The model doesn’t work for full-size school buses, but all 90 Checker drivers are independent operators driving their own vehicles. Checker is a bit of an orphan. It’s the ­smallest division by far and the only one that operates solely in London. It began in response to a need at the airport when there were so few flights it was difficult to coax taxi cabs to the far end of Oxford Street to drive people home.

“I remember when we started Checker,” Matthews says. “There were eight of us working out of a trailer at the airport.”

“We would like to expand across Canada in the next three to five years. In the meantime, we want to saturate Ontario” —Theresa Matthews

It may be small, but that has been a plus recently. When the new company wanted to upgrade technology, it began with Checker. Over the last year, its dispatch system has been overhauled and modernized in keeping with—that’s right—the Uber model. There’s a nifty GoChecker app that delivers a car within minutes. It allows customers to track their ride, pay with credit and rate the experience.

Next month, the patient transport service, now known as Voyago Health, will roll out a similar scheduling system and app, designed to deliver the same experience to users of that service.

“It offers countless options,” says Jarvis. “It will be extremely transparent and simple to use. You will be able to order a ride right away or book it ahead. You’ll see the vehicle pull up in the app. All the information will go back to the health facility paying for the service.”

The next step might be to tie in medical records with the app so everyone involved with the transfer has all the relevant information at hand.

Once Voyago has its system up and running, it will be able to work with other organizations to improve the ­efficiency of all manner of transportation systems. It could offer its buses for use by seniors centres during the day when students are in school.

“Or, let’s say you have a group of ­volunteer drivers who help seniors get to appointments and grocery shopping, et cetera,” Jarvis says. “Our system could help them be much more efficient. Instead of having to book ahead one or two days, we could get that down to minutes. The drivers would simply indicate when they were available. The service wouldn’t change. It would just get better, more efficient and transparent.”

“You want to eliminate empty miles whenever you can,” Matthews adds. “Whether it’s buses or cars or patient transfer, you don’t want the car driving around empty. The technology reduces empty miles, which is also good for the drivers.” 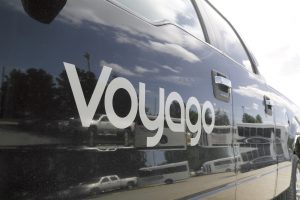 That kind of paradigm shift in the way drivers operate requires a new way of hiring and managing the labour force. It’s bound to be more transitory, with drivers picking up work at their convenience. After all, that is a perk of the new system that requires them to operate their own vehicles.

And so, the new Voyago has a Vworx website where drivers, monitors and patient transfer attendants can apply for and schedule work. And there’s a Vstore too, so those independent employees can look the part, wearing cool Go gear.

Once the technology is in place, Voyago will be ready to expand. It will continue bidding on school bus contracts as opportunities arise. In Waterloo Region, it is operating an electric school bus pilot program.

“We would like to expand across Canada in the next three to five years,” Matthews says. “In the meantime, we want to saturate Ontario.”

With a new brand and new operating model, Voyago is ready to adapt to whatever its customers demand.
Committed as it is to technology, it’s not difficult to imagine the company dabbling with driverless vehicles at some point down the road. It’s not part of the current plan, but it certainly seems more likely than teleportation, which will have to wait at least until the company rebrands again.