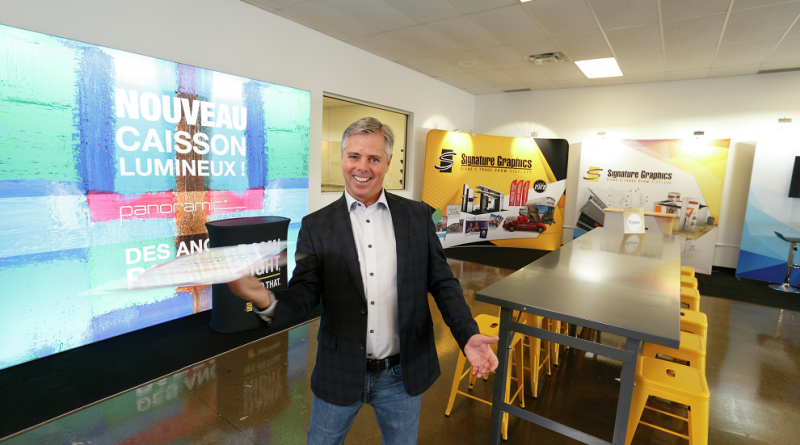 SIGNAGE AND TRADE show displays have changed ­significantly in the 40 years since Signature Graphics first opened, something that has required the company to change and adapt accordingly.

As with many companies that grow in place, new product offerings and equipment were added incrementally, and it took a while to reach the point where there was simply no more room to expand. That was the main reason owner Glenn Avola decided to move Signature Graphics earlier this year, relocating to a newly renovated 7,500-square-foot space on Adelaide Street South.

Another consideration, says Avola, is that “we have a lot of ad agency and large corporate accounts that are located downtown, and we work with a number of interior decorators. With the move, we are more centrally located and accessible to our customers.

“We also have a showroom now that allows us to showcase the larger displays that are available thanks to new technology—it’s now possible to print high-resolution graphics on fabric, and that allows large displays to be lightweight, easily transportable and designed for quick set-up.”

“The London region is booming right now, and we want to be a part of its growth” ―Glenn Avola

Avola points out that the diversity of signage and display items the company designs and produces—vehicle wrapping, billboards and builder site signs, interior wayfinding and directional signs, exterior signs for retail and professional businesses, portable banners and trade show panels, backlit 3D display boxes and more—has expanded exponentially over the years, each with particular production demands.

“We are a graphic design company that will build and install anything we design. We have always been one of London’s biggest signage and trade show display companies, but after 40 years in the old location, our space was no longer efficient. There was no room to expand,” he says.

“The move has allowed us to increase production—the new print room is four times the size of the old one, and the production area is twice the size. We have acquired a wide format flatbed printer that prints directly to rigid substrates. We’re also doing vinyl wall murals with custom print images, often inspirational or corporate messaging.”

The company currently has 11 employees with plans to add additional positions in the coming year. Avola credits much of the company’s growth to Micca Kendrick, who joined the company 10 years ago and is currently manager, sales & operations, and also a junior partner with a small ownership stake. “Her ability and speed have allowed us to double revenues—she’s my right arm.”

His left arm, he says, is daughter, Lanie Avola, who was hired four years ago to cover a temporary administrative leave. “She did such a tremendous job, we kept her,” says Avola with a smile, “and she’s worked her way up to being a key customer service manager.”

While Signature Graphics has national clients and regularly ships trade show items across North America and sometimes beyond, Avola says he sees the company’s primary focus remaining local. “The London region is booming right now, and we want to be a part of its growth.”