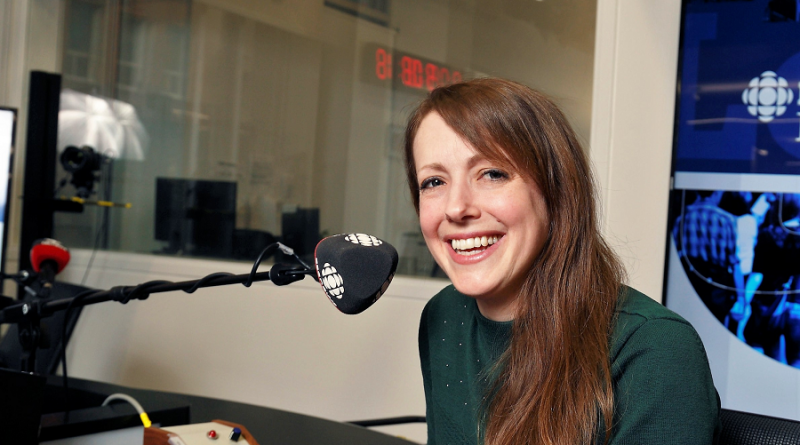 Rebecca Zandbergen, host of CBC Radio’s London Morning, chats about the ins and outs of her career

REBECCA ZANDBERGEN IS host of London Morning on CBC Radio and recently returned from maternity leave. She and husband, Drew Pihlainen, have three children ages three and younger.

She came to London in the summer of 2017 to take the London Morning job, after six years hosting Radio West, the afternoon CBC Radio show in Kelowna. CBC London is the most-listened to radio station in the city. Numbers from last fall give it a 13.3 per cent share of the local market. Its nearest rivals – Fresh Radio 103.1, Jack 102.3, Virgin 97.5 and BX93—all landed between 8.5 and 8.9 per cent, although some have equal or greater reach among unique listeners.

Zandbergen, 39, grew up in Eastern Ontario, in the town of Iroquois on the St. Lawrence Seaway, and studied journalism at Carleton University. She’s worked across the country for CBC and spent nearly a year reporting and teaching in Africa early in her career.

There’s not a lot of time for hobbies right now. “But I used to love running,” she says. “One day I’ll start again.”

Welcome back to the host chair. Was there any rust or trepidation returning to the airwaves?

Thank you! For sure I felt a little rusty. It’s a big transition to go from hosting twins on your living room floor to hosting a radio program in front of a CBC audience.

You studied journalism at Carleton. Was radio always your focus?

Radio was a bit of a fluke. In those days—as I remember it—to register for courses at university, you had to call in. And if your name fell late in the alphabet, your call-in time was later. By the time the Z names came around, the TV course had filled up. And that’s how I found my way to radio. And thank goodness for that.

You’ve worked in at least 10 markets across the country with CBC. What are the advantages and disadvantages of such a nomadic career?

I think I’ve developed a pretty keen awareness of what this country is. We know it’s big. We know it’s diverse. But I’ve lived a lot of it. I’ve spent time in the Arctic, on the West Coast, on the East Coast and places in between. That’s reflected in my reporting.
But there’s a flip side. Moving around so much means I haven’t spent a lot of time in any one place. And as we know, staying put means really getting to know a place. In the biz, we call it institutional memory, and it’s important. So, I’ll admit, I rely on my colleagues and the archives for a lot of that. And oh, being a quick study helps a lot, too.

What brought you to London? Kelowna is a beautiful place.

It is. But Ontario is home, and we missed it. Canada’s western provinces are so much newer than the east, and it just feels different out there. We’re happy to be back where things feel familiar.

What prompted you to work in Africa?

I was young, unattached and it was a wonderful opportunity. I spent time in Cape Town, TA’ing at the Cape Peninsula University of Technology and in Rwanda teaching at the national university. I travelled through neighbouring countries and filed a couple of national stories to the network. I believe journalists learn a lot by travelling and reporting abroad.

What parts of your job do people not understand?

I do a lot more than sit in the host’s chair. When the show wraps, we hold a story meeting where we talk about what we want to book for the next day’s London Morning. That’s when the real work begins for all of us. We call guests, pre-interview them, write scripts, record promos and publish digital stories. It’s a full day’s work.

I arrive at 4:30 a.m. and read and vet scripts. Then I spend some time scheduling tweets for during the show. Then it’s 2.5 hours on the air. After that, coffee and a breakfast sandwich. Where would I be without breakfast sandwiches? Then story meeting and what we call ‘chasing guests’ for the next day’s show. Write, write, write. Head out at about 1 p.m. I get the kids from daycare at about 3:30.

I meet the coolest people and I feel privileged to have them graciously share their stories with me. I also work with a super fine crew. It’s basically a dream job.