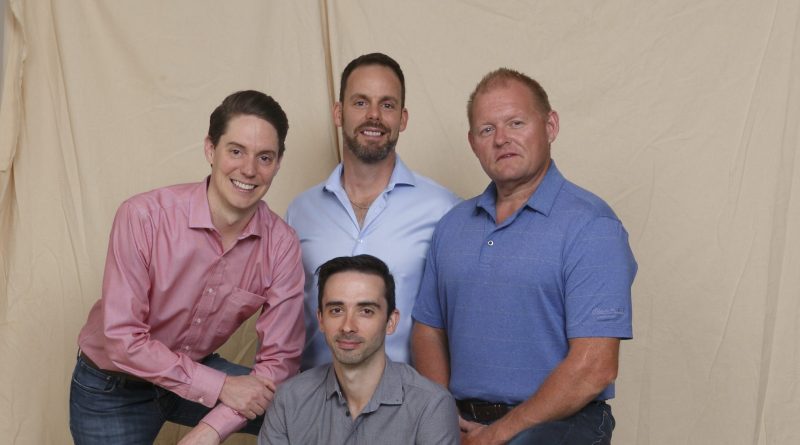 Harnessing the power of the consumer voice, Mobials Inc. is changing the way businesses leverage reviews and referrals

THE WHITEBOARD IN the boardroom of Mobials Inc. is surprisingly useless. The large, frosted glass rectangle is attached stylishly to the brick wall with eight steel bolts. But the bricks are painted white so the glass is washed out.

The diagram on the board—the company’s ambitious master plan—is sketched in light green marker, which is almost impossible to read, particularly when sunlight washes in from Dundas Street through floor-to-ceiling windows that make the renovated Century Building pop from street level.

Beyond all that, the sketch seems completely superfluous, because the two men referring to it, doodling on it and talking about it have every detail of the plan committed to memory and then some. They think about the words on that board and the layers of meaning behind them every day of the week, almost certainly from the second they wake up, almost certainly hours before many of us are awake and engaged.

One of the men, David Brebner, has essentially walked away from what he was doing before to join the Mobials team—and has been designated one of the founders of the company by the original three partners effective this month. The other, James Hayes, describes the organization as “an innovation centre,” giving the place something of a Silicon Valley/evangelical bent that filters throughout the building.

As much as it is a traditional organizing tool, the board is the equivalent of a restrictor plate used in race cars to lower horsepower and help drivers maintain control. Without the faint green lines connecting concepts and ideas, the Mobials team could drive right off the road, into a ditch of hyper-creativity. The board keeps them focused.

Mobials began with the goal of providing customer reviews on websites like Kijiji and AutoTrader. Most people notice what’s on a website; fewer notice what’s missing.

Hayes and his original partners, Brad Hanebury and Marty Meadows, set out to build a system that would collect legitimate reviews and then turn them into sales tools retailers could use to boost their results. The inefficiency was the lack of reviews, together with the poor quality and scattered approach of many existing reviews. (Consider, for example, how unhelpful some of the ramblings on Yelp are to restaurant owners.)

“We are giving [auto] dealers something many of them didn’t have—digital retailing tools. We’re looking for inefficiencies and offering solutions” — James Hayes

That’s how it started in late 2013 and early 2014. While continuing to pursue that goal, the company uncovered many more “inefficiencies,” so many in fact it was difficult at times to decide what to pursue and how quickly. For a while, those decisions were governed by financial considerations. They spent a lot of time raising capital, occasionally unsure how they would meet (an admittedly small) payroll two weeks hence.

But they pulled in Brebner and his colleagues at Magnus Associates, who added some direction and additional capital, and they continued to build a roster of satisfied clients. As winter turned to spring this year, the company blossomed into something more than the founders imagined, becoming the innovation centre Hayes describes. It will double its office space and add 40 to 50 people to its current workforce of 21 by this time next year, spilling into a renovated twin building on Dundas. And it might need a bigger whiteboard.

Mobials didn’t quite have David Brebner at hello, but it was close. Looking for advice and capital, Hayes, Hanebury and Meadows approached Magnus Associates. That’s the consulting firm that was being run by Brebner and his partner, Paul Dugsin.

“We liked what they were doing,” Brebner recalls. “We made a handshake deal and invested.” That was in December, 2013. Merry Christmas, Mobials.

From that day on, Brebner was pulled, inch by inch, more deeply into the Mobials world. He remains an investor in Magnus, but works full time with Mobials, leaving Magnus to Dugsin, who incidentally is also an advisor to Mobials. The two firms work in the same building, so it’s not obvious to an outsider who is with whom, but the people involved manage to keep it straight.

It’s quite a transition from a day early in 2013, when Hayes and Hanebury were in the sauna at the London Squash & Fitness Club mulling over an idea. It became the company’s first product, Reviewsii, but that day the concept was almost as ephemeral as the steam all around them.

“In April 2013, we decided we were going to try it. I worked out of my basement, and he worked out of his loft apartment,” Hayes recalls.

Because they were planning to target the car market right away, they quickly teamed up with Meadows, who was working at CarProof, the London-based provider of vehicle histories and appraisals. He was an advisor to Mobials initially, but left CarProof two years later to join Mobials full-time.

The company’s first breakthrough occurred in early 2015, when AutoTrader.ca signed on to use Mobials Reviewsii product. If you look for a VW Golf within 50 kilometres of London, and find 625 dealership reviews of Leavens Volkswagen along with the relevant vehicles for sale, that’s Reviewsii at work. Mobials runs the service, organizes the reviews and charges a monthly fee for its trouble.

These are not the reviews dealerships pester customers to fill out, jonesing for 10-out-of-10 ratings because their manufacturer overlords consider anything less to be a failing grade. How can anyone who has been asked to fill out such a survey, pushed and prodded by the dealership to give the highest possible grade, take the results seriously? Is there any dealership—any retailer for that matter—that hasn’t won some kind of award? J.D. Power gives out more awards than a Tyke soccer banquet, so many that their value is deluded.

That’s not the business Mobials is in. Dealers do not control the reviews. They come from real people, unbidden, talking about the dealership where they bought or serviced their car. And thus, they have value.

Of course, there are lots of products besides cars that benefit from reviews, and Mobials offers Reviewsii to many other sectors, including education and home renovation.

The mother of all classified sites in Canada is Kijiji, so when it signed up with Mobials and added the Reviewsii product at the end of 2016, it was another big step forward.

But it was just the beginning of what Mobials wanted to do. There are profits to be made charging monthly subscriptions to garner reviews across multiple websites and social networks, to be sure. But the real value goes a step further.

If someone is searching reviews, there’s a reasonable chance she’s in the market to buy the product she’s reading about. Maybe not today, and maybe not tomorrow, but soon and for the rest of her life, as Rick said about a different topic on the tarmac in Casablanca.

What about the next step? What if someone scans reviews for that VW Golf and then is presented with a way to quickly and easily determine the trade-in value of his car? If he punches in his deets, it’s almost a slam dunk he’s seriously thinking about buying a car very soon. How valuable is that information to car dealerships? Very, is the correct answer.

And so was born Tradesii, which gives trade-in values from Canadian Black Book so people know almost exactly what their vehicle is worth as a trade-in. Working with Kijiji, Mobials launched the product early this year with 3,000 dealerships.

“Those are valuable leads,” Hayes says. “We are giving dealers something many of them didn’t have—digital retailing tools. We’re looking for inefficiencies and offering solutions.”

Not surprisingly, Mobials’ own review section—where users rate its first two products, Reviewsii and Tradesii—features clear information, along with verification of reviewers and responses from Mobials staff members to each and every review, even if the reviewer simply clicked five stars. It’s the gold standard for reviews and a clear signal of what the company can deliver to its customers.

The vast potential of recommendations and referrals—R&R Mobials-style—is what fuels the dreams and goals of the partners and their creative team of programmers, sales reps and customer service managers. It’s also when the contents of the murky whiteboard fall under the cone of silence. The company has signed more non-disclosure agreements than Edward Snowden, and the partners are very particular about keeping their secrets.

So, without crossing any legal lines, imagine what kind of service a car dealer might sign up to offer customers, once someone has checked out reviews and sized up their trade-in value? Keeping in mind, most of us borrow money to buy new cars.

And for what other large purchases do people nearly always borrow money?

The possibilities are numerous and can nearly dry out the average whiteboard marker. The Mobials innovation centre is at work on ideas in these areas and many more, all based on the idea that people research their purchases online and tip their hand about what they’re planning to do.

As the company grows, the partners are stepping back to some degree, resisting the urge to be involved with everything, as they once were. Hayes, in particular, finds it difficult. “I met someone the other day who had just been hired in sales. That would never have happened before now. It was a very odd feeling to meet someone after we had hired them and not to be involved with the process at all.”

Not all new experiences are uncomfortable, however. Last month, Jaguar called the company, interested in its Tradesii product. As Hayes tells the story, he pauses for emphasis. “They contacted us!” he says, making it clear how rare such a moment is. But as the company continues to grow and provides an ever-wider suite of services to an ever-larger collection of sectors, it will field more calls like the Jaguar call. There will be more businesses who want in because they see the value of what Mobials has built, the essence of which is laid out for few to see on its stylish, if slightly underwhelming, whiteboard.