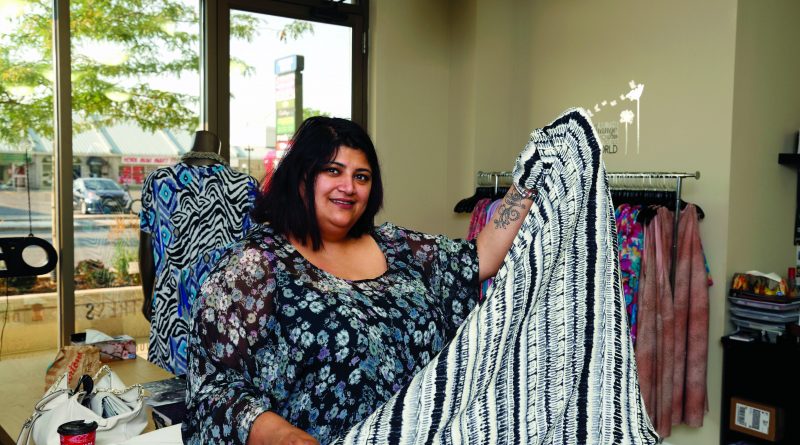 A fledgling fashion designer thinks big about plus sizes

BEING LAID OFF from her job was the best thing that ever happened to Rakhee Chopra. It was the final push she needed to turn her side-hustle as a seamstress into a new career.

Chopra launched her self-titled fashion line for plus-size women earlier this year, and has already debuted a successful spring/summer collection, established an online store and placed her pieces with independent retailers in London and Guelph.

With the help of three summer students hired through Fanshawe College’s Career Services, she spent the past few months designing and sewing her fall/winter collection in preparation for an upcoming fashion show with fellow London designer, Nicole Snobelen.

“If I have an idea, I am not going to rethink it. I am just going to figure out what steps to take to make it happen,” she says with a laugh, commenting on her whirlwind year.

“More than 67 per cent of North American women are size 14 or larger, but most designers just refuse to design for larger women” — Rakhee Chopra

Chopra’s sudden success is built on a life-long love of ­sewing, a passion that grew out of her struggle to find ­fashionable clothing as an overweight child. “I started ­sewing when I was 10,” says the Mumbai, India native. “Whenever my mom would go out, I would take the saris out of her closet, cut them up and sew them into dresses.”

As her skill improved, Chopra began making clothes for other people. She went on to complete a two-year program in fashion design and technology at IITC in Mumbai, followed by a BA in economics from the University of Mumbai.

An arranged marriage brought Chopra to Canada in 2000, where she had the opportunity to continue her fashion studies at George Brown College.

The marriage ended, and Chopra was downsized from her retail job in 2015. At first, she concentrated on growing her custom design business. But after considering the state of the plus-size market, Chopra made the decision to think big and strike out on her own.

“More than 67 per cent of North American women are size 14 or larger, but most designers just refuse to design for larger women. I wouldn’t even call them larger—they are just average,” she notes. “That’s a large number of women who are being ignored.”

Catering to women size 12 to 32, Chopra’s ready-to-wear blouses, dresses, skirts and leggings are designed to be feminine, flattering—and to fit.

Most plus-size clothing is cut too large in the shoulders and arms, Chopra explains, ­causing fabric to bunch up in the back and hang loose in other areas. “This is not going to happen with my designs,” she says. “And most larger women have big breasts, so we don’t want wide necklines. We want to keep it professional.”

In five years, she’d like the Rakhee Chopra line to be in stores across Ontario. With a shoestring marketing budget, she is relying on her #empoweryourcurves social media campaign, some savvy networking and word-of-mouth to grow her brand.

The ultimate goal, Chopra says, is to use her clothing and her message to encourage women of all shapes and sizes to love and accept themselves. “If you don’t feel beautiful inside, you are never going to feel beautiful outside, no matter what you wear,” she says.