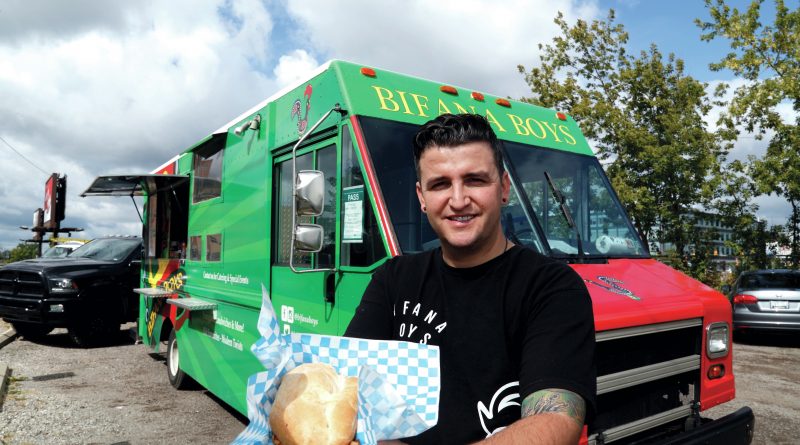 THREE YEARS AGO, when Ricardo Cavaco was entertaining the idea of opening a food truck business, he knew he would need to offer something a little different. He also knew exactly what it would be.

The outgoing Cavaco reasoned that once Londoners tasted a bifana, they would love the bifana. And so he launched his Bifana Boys food truck, hitting the street with a selection of traditional Portuguese foods served with a modern, fun twist.

Cavaco, a Fanshawe College-trained chef, has fond memories of growing up in Alentejo, Portugal, where the bifana is so popular it’s eaten day and night.

“When I was very small, it was the one thing that I looked forward to the most when we went out,” says Cavaco. He describes Alentejo as a beautiful and simple place where one can look far into the distance to the hillsides. “At night, it’s quiet and peaceful. People move at a slower pace.”

Today, the sole proprietor is moving at a dramatically faster pace. While it took a year and an investment of about $100,000 to get the food truck up and running, the Bifana Boys business has since expanded to include catering services and a satellite location open Saturdays at the Western Fair Farmers’ and Artisans’ Market. Cavaco has also grown his workforce to five employees.

“I expected to have expenses, but it seemed like every time I turned around there was a cost. But every day is a lesson learned—some bad, but mostly good” —Ricardo Cavaco

Cavaco says market sales now account for 20 per cent of overall revenue. Both the market location and the catering menu feature a number of additional items that can’t be offered from the truck. In addition, Bifana Boys also sells individual bottles of branded traditional Portuguese sauces—made from family recipes that have been modified for longer shelf life—from the truck, at the market and through a handful of local retailers.

Like many food truck operators, the 35-year-old Cavaco says he relies on social media to engage with customers and market the truck’s whereabouts on a day-to-day basis. “It’s a direct connection to customers and an easy way for customers to connect with us,” he says.

One of seven members of the London Food Truck Association, Cavaco says there are direct benefits associated with being part of the group. “We get better results as a group because we can give the customer more options,” he says. “By being together, side by side around the city, we create events that build business.”

One of the toughest challenges of the early stage business has been juggling costs and overhead, says Cavaco. “I expected to have expenses, but it seemed like every time I turned around there was a cost. But every day is a lesson learned—some bad, but mostly good.”

For anyone contemplating a food truck business, Cavaco says it is best to have a unique idea—and be ready to work hard and long.
“It’s a really fun business, but you have to be passionate and determined.”