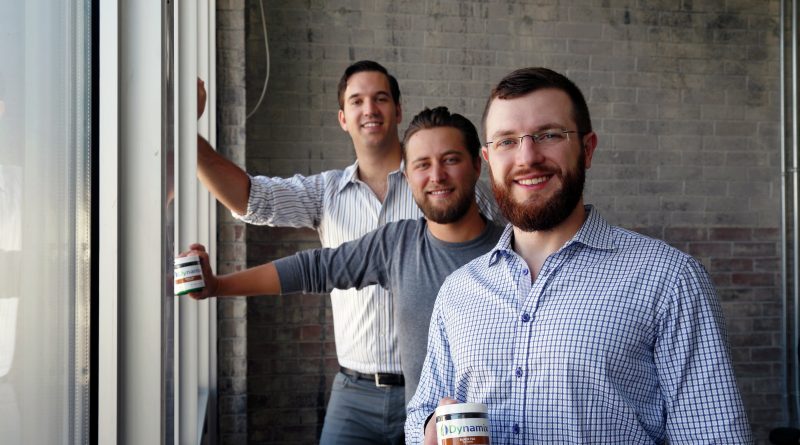 Photo: (from back) Erik Lapointe, Ryan Bauer and Michael Palumbo

IT STARTED AS a school project by Ivey MBA students: Aunt Mary’s powdered drink mix, a cozy and comforting name that captured the image of old-fashioned caregiving when you were under the weather. The powder was developed as an accessory product, designed to counter the foul taste of a medicine that has become increasingly popular—cannabis oil.

When the initial concept of creating an emulsifying powder was first conceived, recreational marijuana users were the target market. But once partners Erik Lapointe, Ryan Bauer and Michael Palumbo started working with advisors in the Western Accelerator program for prospective entrepreneurs, they shifted gears.

“We changed our target market to medical marijuana users as a starting point,” says Bauer. “The recreational market is definitely where the most growth is going to be, but it’s currently a grey area.”

Further refining their business plan though participation in the Propel entrepreneurship program at Western this past summer, the refocused target market also initiated a new name, Dynamix, and a business model that focuses on partnerships with licensed medical marijuana producers, clinics and retailers, in addition to direct-to-consumer sales thought the company’s website.

There are thousands of medical marijuana users in Canada, and cannabis oil is a preferred product for those who don’t wish to smoke. The problem? It tastes awful. In addition, the oil doesn’t mix well with pop or juice, and it is illegal in Canada to sell a beverage with cannabis oil already infused.

“We changed our target market to medical marijuana users as a starting point. The recreational market is definitely where the most growth is going to be, but it’s currently a grey area” —Ryan Bauer

That makes Dynamix a pretty attractive product—it allows users to mix their own flavoured beverage using the Dynamix powder to emulsify the oil. And because Dynamix is classified as a food product, the trio were able to get it to market fairly quickly.

“We own the formulation and have contracted a company in the U.S. to produce it,” explains Bauer. “And we have a great co-packer in Southwestern Ontario that does all of our blending and filling for us. We currently have four flavours—black tea, ginger mango, raspberry lemonade and fruit punch.”

To date, the company has received close to $100,000 in grants and prize money from business plan competitions. They are currently exploring other grant and loan opportunities to support their expected business growth, just as the country is poised to legalize recreational marijuana in 2018.

With the recent Ontario government announcement that the Liquor Control Board of Ontario will have oversight over the sale of recreational marijuana in the province through 150 new subsidiary stores and a website, Dynamix will next head down a path familiar to many of the province’s craft breweries—plotting a strategy for doing business with the LCBO.

“Dynamix drink mixes would be a great fit as an ancillary product on shelves in these stores across Ontario, in addition to the online sales platform they will be developing,” says Bauer. “This is especially true given the Ontario government confirmed the sale of infused edibles will continue to be illegal. Consumers could go into these stores, purchase a bottle of oil and a canister of one of our drink mixes, and make their own delicious beverages with their own accurate dosing. We look forward to building a relationship with the Liquor Control Board of Ontario as this model develops.”

While the trio have set their sights on future expansion into the American market, Bauer says, “We want to prove our product in Canada first. The U.S. is tricky since every state has different laws, and we know Dynamix is not a good fit for states where infused drinks are legal.”