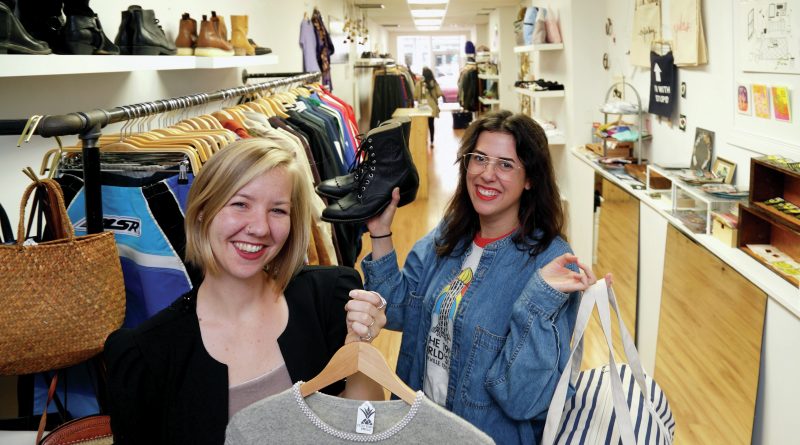 WHERE DOES THE name Filthy Rebena come from? Natalie Bradshaw and Darlene Davis might tell you it’s a crazy aunt or alter ego, but in reality it’s simply a name the business partners came up with while brainstorming what to call their new enterprise.

The two women met when they were working as pickers for a vintage ­clothing company in Toronto—a job that gave them the connections they need to access the rag houses that provide ­quality stock to vintage retailers.

“It’s almost impossible to get into the Toronto rag houses and recycling ­centres,” says Bradshaw. “They’re pretty secretive, and you can’t just walk in off the street.”

When the company they worked for moved out of Toronto in 2012, Bradshaw and Davis moved into other jobs. But they continued ­picking on the side, initially selling their pieces through Etsy, an online marketplace for handmade, vintage and unique goods.

Aside from having the connections to get into the rag houses, Bradshaw and Davis also have an eye for quality clothing, know what styles are trending and can make alterations that will turn a potential castaway into a coveted addition to a customer’s wardrobe.

When they decided to take the plunge and open a bricks-and-mortar store, with rents being what they are in Toronto they decided to look for a more affordable city. Bradshaw was familiar with London from her days as a fashion design student at Fanshawe College (she graduated in 2009), so this is where they chose to hang out their shingle. Their downtown store, on Dundas Street just east of Richmond, opened in 2015, and is one of a growing number of businesses being run by young entrepreneurs in the core.

Vintage shops don’t simply carry second-hand goods. Instead, you’ll find a curated selection, each piece having been carefully hand-picked. It’s a totally different world than the national-brand clothing store that Bradshaw worked for in Toronto before moving here to open Filthy Rebena.

“There was so much waste,” she says of mainstream fashion retail. “I like the sustainability aspect of what we are doing—being fashionable, but making our environment a little bit better.”

“I like the sustainability aspect of what we are doing—being fashionable, but making our environment a little bit better”
—Natalie Bradshaw

Bradshaw is handy with a sewing machine, so she is constantly on the lookout for pieces she can repurpose or alter. “It’s funny what you can do to make something desirable, for ­example shorten a hemline on a skirt,” she says.

Bradshaw and Davis find that sales are strongest between September and April, when more students are in town, but they have some year-round regulars and the Dundas Street ­festivals bring shoppers downtown during the summer months. Mainly it is a destination store, drawing in customers with a strong presence on social media channels, as well as Etsy and the Filthy Rebena website.

The narrow storefront doesn’t ­provide much window display space, so it’s a pleasant surprise when it attracts eyes on the street. “We’ve had a few musicians who were playing at the London Music Hall, and even a deejay from California who came in to shop,” says Bradshaw.