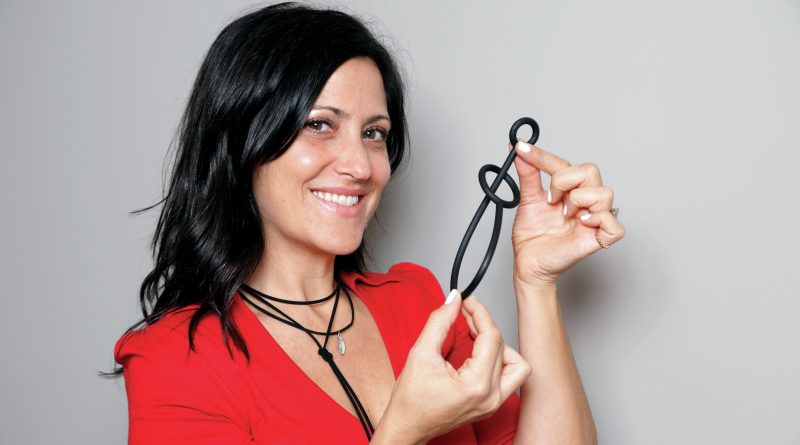 With persistence and imagination, the Kuvu makes its way to retail shelves

WHEN FACED WITH an obstacle in day-to-day life, most people head to the store to buy a solution. For the entrepreneurial among us, however, these types of challenges are often just an excuse to invent a solution.

So it was with Lori and Ryan Gicante, inventors of the Kuvu. The Kuvu is an innovative and simple home ­organization product that can be used in hundreds of ways to hang, wrap, hold, loop, grab, organize and store almost anything you can think of.

Inspiration for the Kuvu began with the Gicante’s need to better organize their home items and make them more readily accessible. With a ­family of five, their garage was constantly full of clutter—and in desperate need of a solution. After one too many hockey-stick-induced dents in their van, the couple sat down at the kitchen table and came up with the Kuvu as an all-in-one means to tackle that disorganization.

And not long after that, they realized they were onto something.

“The concept of Kuvu as a ­business began when we realized just how ­versatile the product was, and ­potentially how many people would benefit from it,” says Lori Gicante. “We immediately wanted ownership of it and therefore started the patent process.”

“Numerous people confirmed our belief in the product by stating how practical, simple and clever our idea was. This gave us the courage to move forward with our plan to build a business around the Kuvu” —Lori Gicante

Patenting is a time-consuming and rigorous process, but the Gicantes became confident the idea borne from their frustrations had real commercial viability.

“During this process, numerous people confirmed our belief in the product by stating how practical, simple and clever our idea was,” says Gicante. “This gave us the courage to move forward with our plan to build a business around the Kuvu.”

Like many product startups designed to be sold in retail stores, the Kuvu business model posed a series of challenges that went beyond the traditional sales and scaling-up challenges—the most difficult of which was convincing retailers that their product was deserving of space on store shelves.

“The greatest challenge we faced has been getting buyers of large retailers to return our calls,” says Gicante. “As a company with limited products, buyers were less willing to take the time to talk to us versus say a company with 1,000 products.”

One option would have been to work with a broker or ­distributor to leverage their existing business relationships and logistic infrastructure to help jump those initial ­hurdles with retailers. But this isn’t without its own risks, cautions Gicante. “Success can come quicker if you ­introduce a distributor, however you must be able to trust their efforts and sacrifice some of the profit margin,” she says. “No person will work as hard for your business as you do, therefore relying on a third party can be a challenge.”

By being tenacious, promoting the Kuvu at industry trade shows and using creative approaches like ­securing an opportunity to introduce and promote the Kuvu on The Marilyn Denis Show, a syndicated daytime lifestyle ­television show, the Gicantes were able to get the ­product on the shelves at Home Hardware, a nation-wide chain of over 1,000 stores. The Kuvu is also sold online at www.thekuvu.com.

“Building a business around a product rather than a ­service is a costly undertaking,” sums up Gicante. “The creation of the Kuvu required patents, trademarks, research, legal costs, moulds, materials, packaging and costs associated with testing and prototypes. For each of these steps, a partnership with another business that shared our vision had to be formed. These partnerships each required time to collaborate—and time for the end results.”