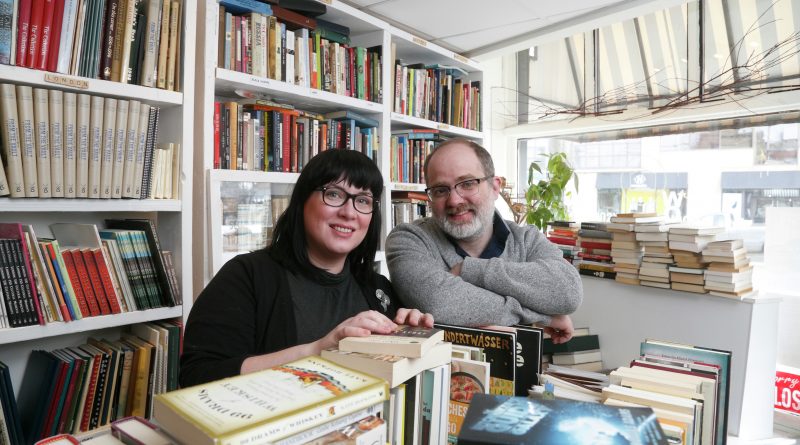 Despite Amazon and the rise of ebooks, a trio of ­independent city booksellers hold steady. As with all bricks-and-­mortar retail, the experience is the thing

IT’S QUIET IN a way that stores rarely are these days. There is no music playing and little chatter. The only sound is the rustle of pages and the creak of the wooden floorboards. Walking down the spacious aisles between the bookshelves, you are surrounded by old books and even stranger items. There are postcards, a vintage typewriter and even an old lectern.

It’s a bit like being in an old library—except everything is for sale.

This is Attic Books, one of London’s few remaining used bookstores. It’s not just the inventory that feels old-fashioned: used bookstores themselves are often talked about as though they are things of the past. Headlines for years have pronounced physical bookstores dead, yet Attic Books on Dundas Street still lives. The shop has been open for 21 years and has grown into one of the largest used and antiquarian bookstores in Canada.

There are many reasons why it has succeeded, but Attic employee Rebekah Brayton says organization gives the store its edge. “If a bookstore wants to succeed, to me, being able to find a book that you’re looking for is a really important thing,” says the 25-year-old. All of Attic’s books are alphabetized and the shelves are checked twice a week.

Ironically, Attic’s owner, Marvin Post, is not an ­organized man. His desk is littered with papers and stacks of books tumble onto the floor behind him. He has just returned from a show—he does about 10 a year—where he has hawked his wares and met other vendors. The shows are another way he brings in revenue, but Post, 63, says while it’s true many stores have closed, the gory headlines are misleading. “I [have sidelines] because I enjoy them, but there’s a lot of different ways in this business to make it viable.”

Post remains optimistic in a world of dramatic change. London has seen several book stores close in the last decade and the national numbers for book lovers are bleak: though physical books are the preferred medium of readers, unit sales of print books fell four per cent in 2017 from 2016, according to BookNet Canada.

Online shopping for books now makes up more than half of all sales, and Amazon is at the forefront: its global book sales went up last year by 46 per cent to USD $3 billion in the first half of 2017. Its e-book sales increased to USD $740 million.

Bookstore chains also continue to dominate a quarter of the market, but Post says it is a mistake to navigate the same seas they do. Many bookstores fail by trying to mimic the big brands only to be swept away by their buying power, he says. The stores that are still in business are “usually the ones that have something unique about them.”

Case in point: London’s other large secondhand bookstore, City Lights. It’s only a 10-minute walk away, but the differences between them are stark: where Attic is spacious and orderly, City Lights is a labyrinth of books, DVDs and vinyl. The aisles are barely the width of a person.

The Richmond Street shop has been open since 1975. Its original owner, Marc Emery, is a cannabis activist widely known as the ‘Prince of Pot’. Jim Capel and Theresa Tarasewicz took over in 1992. With backgrounds in ­philosophy and fine arts respectively, they embraced City Lights’ eclectic beginnings and have curated an inventory to match.

As Capel, 52, says, part of City Lights’ appeal is that it offers something unique. Although they don’t specialize, Capel’s goal is to have books and an atmosphere that would appeal to him, in the hopes that others will feel the same.

“Most of our customers, they’re very erudite and they love coming in for that aspect, probably even more so than the price,” he says. “They’re looking for something that might be out of print or maybe just a cool old edition of something that Chapters doesn’t have.”

Of course, used bookstores are no longer the only places to acquire rare books cheaply. Online, anyone can find old editions and pay more for shipping than the book itself.

“All those things that I said were unique about City Lights in terms of used books and the kind of variety you get—the reality is you can also get them on Amazon,” Capel admits wryly.

City Lights certainly had its fair share of challenges. In the early 2000s, he says they saw sales drop for 10 years in a row. “When that happens, it does make you quiver.”

He says City Lights’ sales rebounded and have now plateaued, and they now focus on the store itself rather than on expansion online. They have even ceased selling on Abebooks, a popular online website, noting that since it was purchased by Amazon, their profit ­margin virtually disappeared.

Back at Attic, Post decided on a different approach. He continues to sell on abebooks.com and maintains a separate stock he reserves for exclusive online retail. Marilyn Dillon, one of the store’s clerks, says they stay competitive by selling to book aficionados across Canada and beyond.

“We ship around the world,” she says. Being online has allowed them to sell books to customers in Moscow, Tokyo and Australia, among others.

Unlike big chains, stores like Attic and City Lights are ultimately an extension of their owners’ personality. Although he has evolved his business practices, Post sees enthusiasm as the key to his continued success. “I think a large part of why the bookstore is successful is because I enjoy what I do,” Post says with a rare smile.

Vanessa Brown at Brown & Dickson agrees. “Bookselling is a vocation,” she says. “Once you discover that it’s the thing that you want to do with your life, you find a way to do it. Otherwise, you’re vastly unhappy.”

Brown and her husband Jason Dickson’s love for bookselling stretches back years, but their jointly owned store on Richmond Row only opened two years ago this August—an anniversary Brown and Dickson couldn’t quite remember. Like their marriage, their business is an ­endeavour that’s marked by passion, not by time. “When you throw yourself into something completely, and you’re in the dark heart of it, you lose your bearings sometimes,” Dickson says.

As new bookstore owners, Brown and Dickson didn’t live through the wave of closures in the late 1990s and early 2000s brought on by technological change. Instead, the internet has been integral to their business model from the very beginning. “The robots help us,” as Dickson sarcastically describes it. They say the notion that young people are flocking to e-books and away from paper is a myth—it is older people, not millennials, who are the typical Kindle reader. Having an online presence has only brought them more ­clients, many of whom are under 30.

Brown herself had first considered bookselling when she was only a teenager, a student attending London Central Secondary School and harbouring an obsession for Lucy Maud Montgomery. Downtown after school, she went to a used bookshop and saw a signed copy of Montgomery’s Pat of Silver Bush. Nancy, the woman behind the counter, pulled it out of its display cabinet. “She let me hold it and run my finger over the signature. And I just never got over that,” Brown says.

From then on, through adolescence and even a brief stint as a stay-at-home mom, Brown, like Post, Capel and her ­husband, would make bookselling a constant in every ­chapter of her life.

As she puts it, “it gets under your skin.