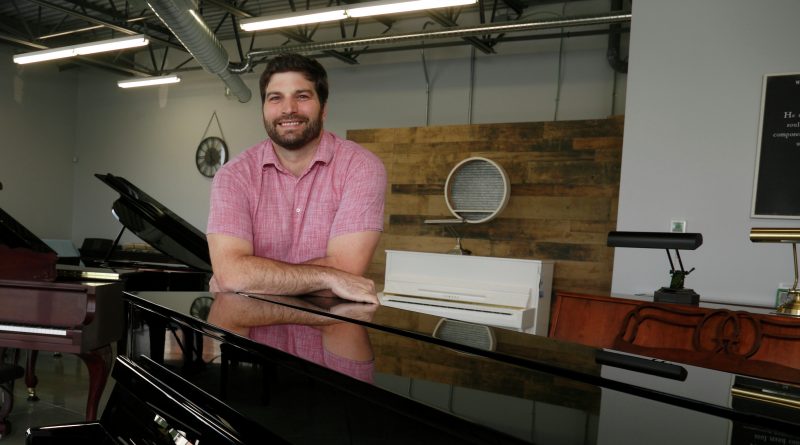 Two years after fire changed the tune  of its business,
D&S Pianos returns to bricks-and-mortar retail

“WHAT DO WE really want to do?”

That was the existential question Darryl Fabiani ­considered several months ago, as he thought about the future of his business, D&S Pianos.

Two years ago, he was free of such philosophical considerations, but on June 30, 2016, the Hyde Park strip mall that housed D&S and 13 other businesses burned to the ground.

Fabiani’s immediate game plan was to focus on moving, servicing, repairing and restoring pianos—something that was always a significant part of the business. In the absence of a showroom, D&S held a series of pop-up sales events across Southwestern Ontario.

In London, some of those events were held at Aeolian Hall, which continues to provide storage space.

Having survived the first year and settled into a bit of a rhythm, Fabiani and his business partner, Steve Grega, began to think longer term. They still own a piece of ­property on Hyde Park Road, not far from the old store. And they still hope to build a combination retail store/concert and lesson venue on that land one day.

“When we thought about what we want to do, what we’re good at, we decided to focus on the pianos, not all the extra things we had in the other store” —Darryl Fabiani

But in the meantime, they’ve taken the next step in the company’s rebirth and opened a store in the Kilworth Business Park, which houses an eclectic assortment of office, commercial and light industrial enterprises.

At the moment, the store operates by appointment only. It features a dozen or so Yamaha pianos, along with a few resales.

“It gives people a chance to come and play the pianos, to hear them and feel them,” Fabiani says. “When we thought about what we want to do, what we’re good at, we decided to focus on the pianos, not all the extra things we had in the other store. We want to help people find the right piano and then service it for them.”

The atmosphere is relaxed, with an espresso machine in one corner of the 1,600-square-foot space and Grega’s restoration projects in another. Coming soon is a wall of fame—photos of various professional musicians D&S works with.

As an official Yamaha partner, D&S delivers and tunes pianos for concert venues across Southern Ontario.
In addition to Fabiani and Grega, the company employs a third technician and six part-time piano movers who are busy three or four days a week.

“On a busy day, we will get 30 calls for service, tuning or assessment. People call to see if we will buy their piano or because they’re looking to buy something special. We are happy to provide our expertise.”

In the meantime, the Kilworth store represents the latest chapter in a story of perseverance that has the company’s loyal customers playing a happy tune.