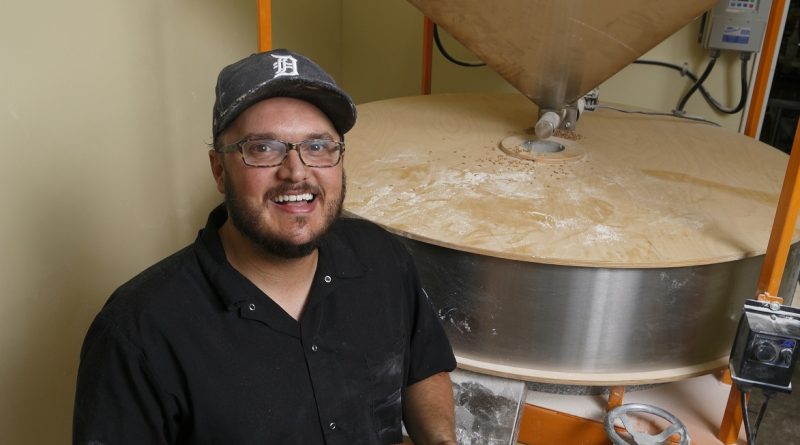 RICHARD PLACZEK WAS studying culinary management at Fanshawe College, dreaming of becoming a famous chef, when one day he took a life-changing stroll through a Chapters bookstore.

The former real estate agent would soon open The Whole Grain Hearth Bakery, which, in just seven months, has developed a steady customer base who’ve embraced his focus on fresh bread and baked goods made with mostly local ingredients and certified organic grains.

“We’ve built our reputation on really good quality, that’s all we focus on,” says Placzek. “How can we make the things we do better every week? Competition, all that stuff, will sort itself out as long as we’re true to our mission statement—delivering the best quality product we can.”

Placzek’s family has been in the real estate business his whole life, and he followed the same path for more than 14 years before deciding it was time for a change.

He ended up earning a master’s degree in politics, and a second in political theory, along with an opportunity to come back and do a PhD. But after deciding the job ­opportunities weren’t there, he turned to cooking, something he always enjoyed doing.

That led him back to London and Fanshawe College three years ago.

Placzek knew there was a market for his recipes before the business even launched because he was making bread out of his home, supplying a list of some 120 clients. Opening his own bakery, however, meant making a significant investment.

Although his partner, Amy Balfour (Placzek describes her as “basically a wizard” with pastries), helps with the workload, putting up the capital for the business was squarely on his shoulders. That investment, he estimates, came in at around $180,000 for renovations to his 958 Leathorne Street location, not to mention the purchasing of necessary equipment.

However, the investment also provided him with a retail storefront.

Although the shop is only open to the public on Fridays and Saturdays right now, having the storefront provides other benefits than just added income.

“I love Fridays,” Placzek says. “I want to meet the ­customers. We bring them in, we give people tours, we show them the flour mill; we want to be an open book.

“If we’re going to say we’re milling our own grains, we’re doing this and that, we want to be that open book. Sometimes things happen behind a wall and who really knows what’s happening. We want to be as open and ­transparent as possible.”

Sales channels include retail sales at the bakery, ­wholesale to local retailers such as Lyn Dyn’s Health Food Store, the Booch Organic Kombucha store and The Pristine Olive Tasting Bar, as well as retailing at farmer’s markets in Dundas and London.

Placzek says business has been good since The Whole Grain Hearth Bakery opened its doors, adding things have gone “even a little bit better” than he expected them to.

For example, he didn’t think he’d be breaking even on monthly expenses so quickly. By later this summer, he expects the business will move out of a break-even position and begin making money—he might even draw a paycheque.

His focus, however, is always do things in “a very ­sustainable way.”

Currently, he can produce about 150 loaves of bread in a day. He figures that number can reach upwards of 350 loaves before maxing out the current capacity of his space.

But that doesn’t mean he doesn’t have dreams for the future.

“Long-term, we’d like a retail café setup, having a big, open space,” he says. “But we’re growing, new people are finding out about us every day. It just takes time.”