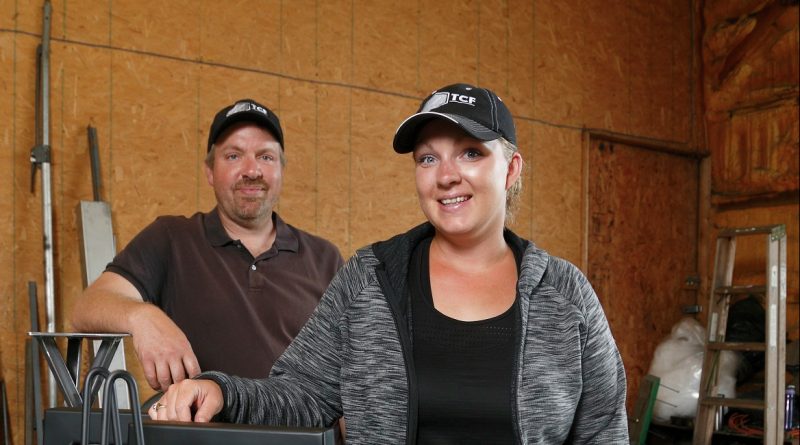 AARON TAYLOR ALWAYS dreamed of opening his own custom metal fabricating shop, but as a self-described skeptic, he was never sure when the right time was to strike out on his own.

Thankfully, his wife, Cassandra Berkelmans, is more of a risk-taker.

After watching Taylor push himself to the breaking point by working his full-time job as plant manager at a custom fabricating shop and pursue a part-time passion for his own metal fabrication clients, she knew something had to change. It got to the point where he was working 18- or 19-hour days.

“That went on for about six months and I said, ‘This isn’t working, you’re killing yourself,’” recalls Berkelmans. “We had nothing to lose. My background is law, his is metal fabrication, and the worst-case scenario if this didn’t work was we both go back to work.”

With that in mind, the couple launched Taylored Custom Fab from a shop on Trafalgar Road in 2015.

“We’re keeping up, but just by a thread. It’s a good problem to have” —Cassandra Berkelmans

Custom metal fabrication can be difficult work, but Taylor says he enjoys the challenge, particularly when someone asks him whether he can do something or not. That willingness to create just about anything ranges from custom furniture pieces, gates and railings to welding repairs, barstools and even pig roasters.

Taylor says he likes to think of the business as a mom-and-pop pizza shop—a spot where detailed attention and care goes into every order, no matter how big or small.

“At the beginning, we had stuff to do [and] I was hitting every deadline,” he says. “But as of late, as our name gets out there, we’re busier and busier. That’s why I compare it to the ma-and-pa pizza shop—the word is just out you have to go to this place.”

Berkelmans says the couple spent the first couple of years “driving around hell’s half acre” to secure orders and get jobs. In the last six months, however, they’ve turned a corner and things have been growing almost exponentially.

“We’re keeping up, but just by a thread,” Berkelmans says. “It’s a good problem to have, but we do get overwhelmed. Still, at the end of the day, this is what we wanted.”

Given his cautious nature, Taylor admits he’d like to see the business get “a little bit bigger,” but adds he doesn’t want to expand too quickly as he sees that as the downfall of too many once-promising businesses.

And even more risk-tolerant Berkelmans is on the same page as it relates to the future of their passion project.

“We don’t want to get into the big, corporate world. We’ve never talked about that,” she states. “The reason we’ve been so busy is we use his expertise to bang out really high-quality work. As soon as you start hiring other people, you’re compromising that somewhat. It would be nice to get a little bigger, but not a lot bigger. That’s not our goal.”