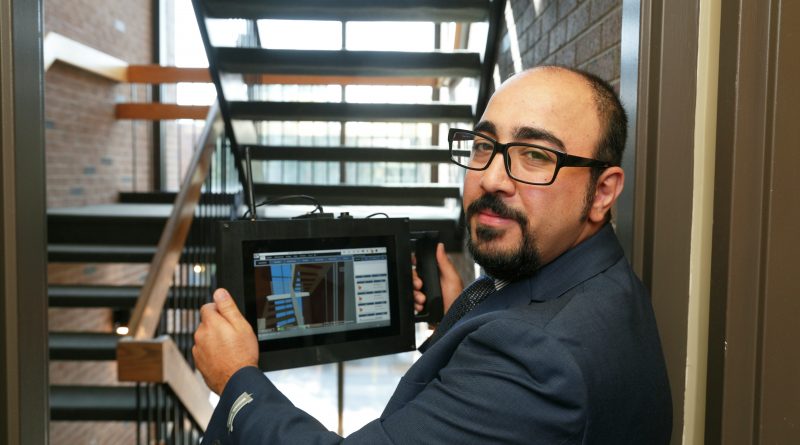 YOU DON’T HAVE to work in the industry to imagine that managing a construction project is an awful lot of work. Hundreds of variables all need to be carefully juggled for a project to be completed on time and on budget, and until recently, the construction industry has been relatively old school in its approach to new technologies on the jobsite.

One London startup hopes to change that with a revolutionary building information modelling (BIM) tool designed to bring high-tech 3D mapping and virtual reality directly to the construction site.

BIM Manager Eyes Enterprise, or BIM-MEE, was founded in 2016 and has been hard at work on a unique prototype—a tablet-like handheld computer featuring a 3D scanner, camera, advanced sensors, a robotic arm and a touchscreen interface.

The device is capable of capturing issues and problems at constructions sites in the format of 3D reconstructed models, and then uses cloud-based storage to share those models with designers and control engineers anywhere in the world. BIM-MEE’s powerful software platform can then be used for creating follow-ups, work allocation process and progress review, as well as daily base construction chats.

According to BIM-MEE founder and CEO, Mohammad Delavar, the technology has the potential to deliver huge gains for the construction industry.

“Deployment of this technology could facilitate ­project-level communication at the construction site, ­eliminate the significant cost of change orders and decrease the cost and time required to resolve things like predicate issues at the construction phase,” says Delavar. “The ­mentioned problems traditionally have been known as major challenges of the industry, therefore it is a revolution to come.”

A great amount of preparation went into Delavar’s development plans. “The market evaluation, needs, gaps, the main idea for the development, feasibility study and the deployment barriers for the market have been carefully monitored and recorded by the development team over the last seven years,” he explains.

Delavar has over a decade of experience in BIM development and has conducted doctoral research on the advanced applications of BIM for the construction industry. By experiencing the many pitfalls firsthand, he had the opportunity to begin identifying applications for his technology, which he then refined through his research.

Another opportunity to refine his technology came through London-based construction powerhouse, EllisDon. The firm’s CTO, Thomas Strong, is one of the founders and current president of Canada BIM Council, and has played a significant role in BIM by supporting BIM research projects, holding seminars and workshops and providing data from real-life BIM implementation case studies from major construction projects. 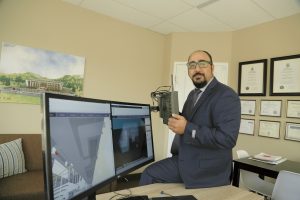 “The generous support of BIM-MEE’s development by EllisDon created an invaluable opportunity for us to have access to EllisDon’s major construction project BIM models and other data,” says Delavar.

One of EllisDon’s challenging and complicated projects—Mount Sinai Hospital in downtown Toronto—was selected as a case study for the deployment test of the BIM-MEE’s technology prototype. The project’s BIM 3D models were incorporated and used to evaluate the capacities of BIM-MEE’s software platform and test the device in a live construction environment.

“More in-depth tests and evaluation will be conducted in the future, but thanks to the unique opportunity provided by EllisDon, the initial tests approved the claimed performance of the device and identified the weakness areas to be covered in the commercialization process,” says Delavar.

“BIM-MEE has started the fundraising process for commercialization,” continues Delavar, “and is planning to expand the company to be operated from a more industrial location around the London area where both engineering and manufacturing could happen.”