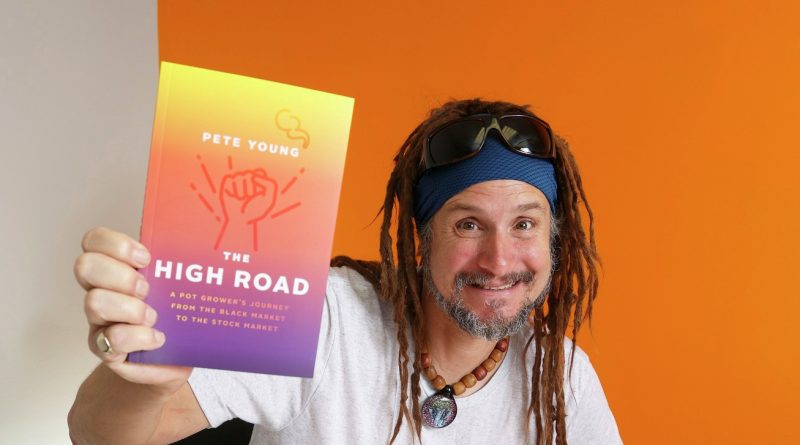 In a new book, Indiva’s Pete Young chronicles the changing fortunes of a lifelong cannabis activist

IN THE FINE storytelling tradition of showing-not-­telling, Pete Young’s new book begins January 23 of this year, with him at the Toronto Stock Exchange, getting ready to ring the bell to open trading. Sporting hemp pants, a metallic paisley shirt and a hand-blown glass necklace, he was there to help celebrate the listing of London-based Indiva on the TSX.

Joining him that day, dressed more traditionally, were Niel Marotta and Koby Smutylo, the two Ottawa-based men who bought the company four years ago when it was about to wither and die. One of the first things they did was reach out to Young, a lifelong cannabis activist, to deliver the expertise they didn’t have. He had been loosely associated with the original licence application and eagerly signed on as master grower for the new, financially stable, version of the company.

“In my wildest dreams, I never imagined this journey—to be involved with a $40-million pot company after I started growing it in five-gallon pails in New York” —Pete Young

His journey from pot-growing teen on Long Island to social outcast at Arthur Voaden Secondary School in St. Thomas to medical marijuana crusader to bell ringer at the TSX blows Young’s mind more so than any illicit substance ever could. “In my wildest dreams, I never imagined this journey—to be involved with a $40-million pot company after I started growing it in five-gallon pails in New York.”

The journey is documented in Young’s new book, The High Road: A Pot Grower’s Journey from the Black Market to the Stock Market. It covers his activism, his work to legalize pot in Canada and his decision to create the London Compassion Society, a not-for-profit organization that has delivered medical marijuana to patients for years.

It was a wild ride, perhaps predicted early in life. One of many turning points in his life occurred at age 13. Was that when he tried pot for the first time? Not quite.

“I took my first hiatus from smoking at 13,” he says, ­offhandedly. “I was smoking up all the time, high all the time. I failed gym class if you can believe it.”

That was a particular disappointment to him because he was athletic. His other hobby living on Long Island was surfing.

The family came to St. Thomas when he was 15. He didn’t like it and went back to New York the first summer. He and his buddy, Kevin, began growing pot in five-gallon pails on apartment rooftops. And they got some advice on avoiding legal trouble from an unlikely source: “Kevin’s dad was a cop. He told us how to do it without attracting attention.”

A decade ago, Young met Simone Viskupic. She was impressed by his dedication to London Compassion, but didn’t have all the details. That changed quickly.

“On our first date, I had two cell phones. It wasn’t what she expected, but she saw the reason for it.” By then, Young was using very little, mostly helping others and crusading for legal cannabis. They married in 2012 and have two dogs.

“She proofread the book. I am so lucky she came into my life 10 years ago.”