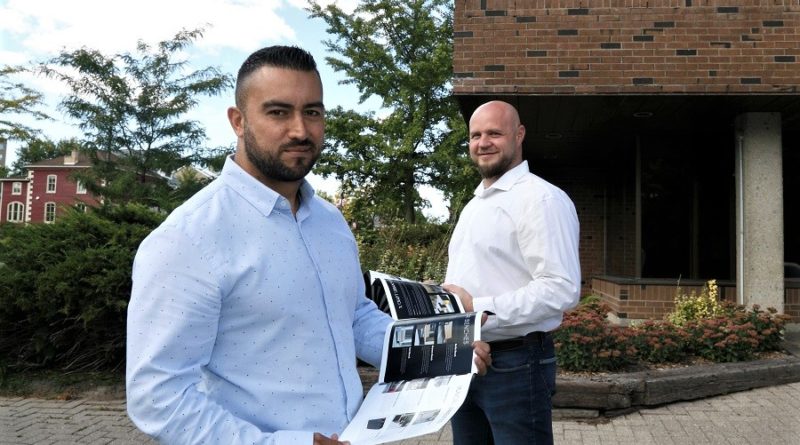 Tapping into the experiences of life and location, X Craft looks to bring new identity and purpose to public spaces

FOR AMKO SEFIC, the path to Canada went through war-torn Bosnia, where he fled in the 1990s as a young child, and through Germany, where he spent much of his childhood. By 2006, he had made it to Canada for good.

He brought with him very little. “One hundred euros in my pocket — and a bag,” he recalls. But he also brought the things you never really shake: trauma, on the one hand, and a sense of what designing a better world might look like.

Years later, Sefic would meet Sergio Palmer — himself a Colombian immigrant to Canada, and a former Canadian soldier grappling with his own PTSD. A tight friendship ensued first, and more recently a business partnership. The pair founded X Craft, a contemporary concrete contracting and urban design firm intent on bringing the aesthetics and functionality of modern European design to London streetscapes.

The origin story of X Craft is one of its founders, Sefic and Palmer, both struggling with their own traumas and their own recoveries, both working through the process of reassembling their own lives, coming together with an idea to design cityscapes that were inviting and functional.

But it is not so much that inviting and functional are end goals on their own. Rather, they are qualities of a much loftier and noble ambition to use the tools of design to create spaces where anyone — those who might be suffering and those who aren’t — can find an accessible point of entry to their community.

Whether that’s as simple as a park bench that guides you into a conversation with your neighbour or as substantial as a skate park doubling as a home-away-from-home for vulnerable youth, Sefic and Palmer’s belief is straightforward: If you design better public spaces, a better public begins to take shape.

At the heart of X Craft’s pitch is that more functional public spaces are healthier spaces — an idea well-backed by research into the links between mental health and urban design — and the partners believe that they can change Londoners’ relationship to their public spaces.

“We want to get people to use the parks,” Sefic says. “We visited probably every park in London, and if nothing else, they need an upgrade.”

For Sefic and Palmer, contemporary urban design with a particularly German flair (that is to say, obsessively engineered) was where their ambitions and aesthetics intersected. They use a lot of concrete, and their focus as a company is on municipal contracts and designing outdoor spaces, where they think their design philosophy can have the greatest personal and civic impact.

In this view of the world, a park is never just a park, and designing one makes a whole set of value statements. A park is not just a park, but a symbol of investment in youth and the public good. “Canada doesn’t have modern urban design like they do in Germany, for instance,” Sefic says. “Germans, they invest a lot in their youth.”

It is still early days for X Craft, which is servicing the residential and commercial sectors as well as pursuing municipal contracts. The partners recently purchased a new workshop and office building on Grey Street, and Sefic says the young firm has a handful of projects underway. In the long run, Palmer adds, they would also like to build spaces specifically intended for people working through their own PTSD.

“We’re going to help a lot of people with this,” adds Sefic. “There’s help, and we want to show people there’s help.”