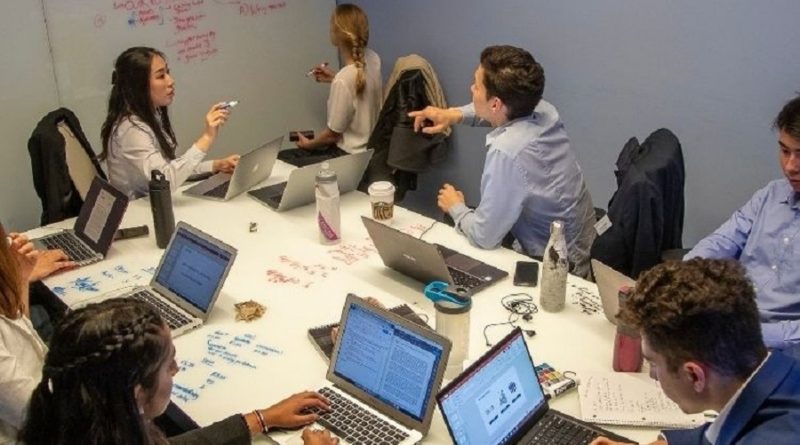 THERE ARE KIDS who buy from a lemonade stand.  And there are kids who build the stand, alert the neighbours, mix the lemonade and serve it up, with ice.

Zac Yungblut was that second kind of kid – and is now that kind of entrepreneurial Western student.

As one of 10 students in the first cohort of Western’s new Founders Program through the Morrissette Institute for Entrepreneurship,  Yungblut has already operated three businesses, if you don’t count the lemonade stand.

When he first heard of the Founders Program, Yungblut knew he had to apply. “I went all in because it’s a life-changing experience,” said Yungblut, in his second year in the DAN Department of Management and Organizational Studies.

“Since first year at Western, I’ve been looking for other students with a similar entrepreneurship mindset, so finding people who are passionate about the same things is amazing,” he said. “I think this can act as a catalyst for people already willing to put in the work.”

The Founders Program offers 10 students per year access to education, mentorship, a tuition bursary valued at $20,000 across three years, and the opportunity to grow their entrepreneurial network and leadership.

Deniz Edwards, director at the Morrissette Institute, said the program is intended to cultivate entrepreneurial spirit in students; develop ambassadors who can help build and grow that spirit in other students; and create a community of diverse students from a range of disciplines and faculties.

Open to all second-year students at Western and its affiliated university colleges, about 400 people expressed interest in being part of the first cohort of the program, Edwards said.

While just 10 students are in the first class, the aim is to raise a total of $2.5 million from donors to enable each class to expand to 25.

Applications for next September’s new class will open Jan. 6, 2022.

“We’ve been talking about this program for many years so it’s really exciting to see it come to life,” Edwards said. “We have a large suite of student-entrepreneur programs and services and we work to build them across all programs and years. One key difference in the Founders Program is that we’ll have an even higher degree of engagement with these students and that they in turn will mentor other students.”

They will also be ambassadors of entrepreneurship throughout campus and beyond it, she said.

Offered across all faculties

Some students, like Yungblut, have experience in starting and operating businesses, while others have good ideas yet to be realized. “This is further evidence our Institute is here to work with everyone, regardless of faculty, program, year or entrepreneurial stage,” Edwards said.

“I’m really excited to see what these students will accomplish in the next three years, and once they graduate.”

The Founders Program has been made possible by donors who have collectively contributed gifts of $1.4 million: The John Dobson Foundation, which funded five scholarships; and with gifts from the Sabourin Family Foundation, Kevin Sullivan and friends in memory of KPMG executive Paul Woolford.

“We want students to be the best possible entrepreneurial versions of themselves. We hope this program will empower them to think big,” said Ian Aitken, managing partner of Pembroke Management Ltd., and a director of the Dobson Foundation.

“John Dobson believed in backing great people early and the Foundation is very interested in creating incremental, positive change by being early supporters of something meaningful,” Aitken said.

When Aitken graduated from Western, Ivey offered just one course in entrepreneurship; at the time, it wasn’t considered an institutional or national priority.

But the growing entrepreneurial emphasis of Western – led by Morrissette Institute director Eric Morse and Western president Alan Shepard – meshes well with the values of Aitken, who also founded Enactus Canada, a social enterprise charity mobilizing young business leaders. “Alan and Eric are a dream team as far as the Dobson Foundation is concerned and we wanted to partner with them to promote entrepreneurship more broadly at Western.”

He added, “We would like to have a more entrepreneurial Canada and we believe entrepreneurs come from all faculties, not just from the business school, so this program is a great fit.”

Supported by a $5.5 million gift from the Pierre L. Morrissette Family Foundation, entrepreneurship research, education and programming across campus are coalescing into the Morrissette Institute for Entrepreneurship.

The Institute, powered by the Ivey Business School, will create a single ecosystem and brand as the engine and champion of entrepreneurship at Western.