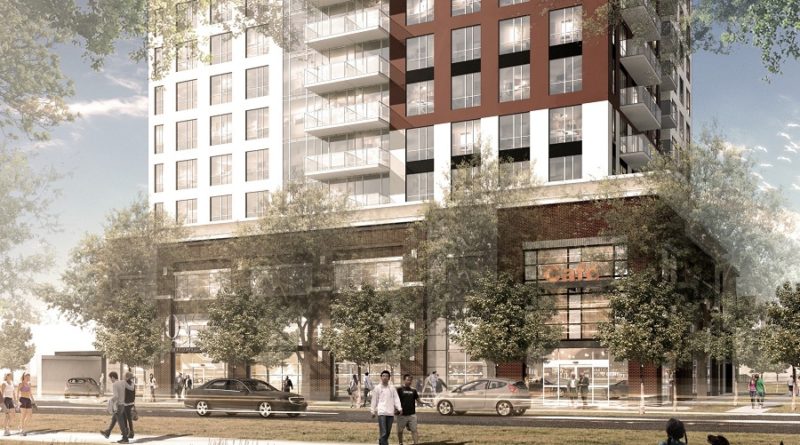 First proposed in 2015, city council has voted to approve an Auburn Developments 17-storey highrise across from Victoria Park

Photo: An architectural rendering of Auburn Developments’ proposed highrise at 560 and 562 Wellington Street

IN AN EIGHT to four vote on Tuesday night, London city council approved a rezoning application for a proposed Auburn Developments 17-storey highrise at 560 and 562 Wellington Street, across the street from Victoria Park.

Auburn first applied for a zoning change that would allow the project in 2015. At the time, it was pitched as a 25-storey apartment building, which dropped to 22 storeys in a second application followed by a 17-storey proposal which was discussed during Tuesday’s meeting of city council.

The proposed highrise has long been a point of contention for neighbours concerned about its impact on the surrounding historic Woodfield neighbourhood, a concern echoed by city staff. London city staff stating in a report that councillors should refuse the rezoning application because it “is not in keeping with the West Woodfield Heritage Conservation District Plan.”

City staff also argued the application does not conform with the London Plan, nor is it consistent with Ontario’s Provincial Policy Statement, which promotes intensification while conserving significant heritage resources.

Prior to voting on the rezoning application, councillors approved an amendment from Ward 2 Councillor Shawn Lewis, which added affordable housing requirements to the apartment building.

The contentious development, which has drawn both public support and backlash, is likely to be appealed to the Ontario Land Tribunal, which handles appeals of municipal development decisions.